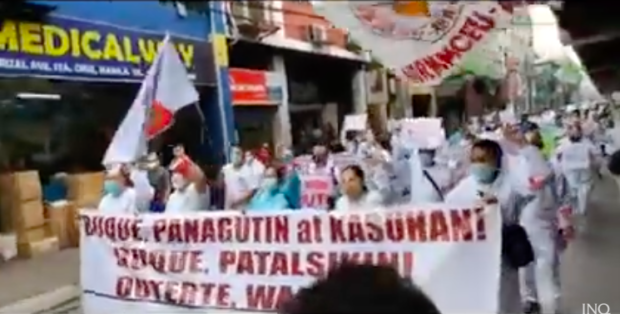 MANILA, Philippines — A number of health workers staged a protest on Wednesday in front of the Department of Health (DOH) headquarters in Manila City to call for the resignation of Health Secretary Francisco Duque III, among other demands.

The rally was joined by other health workers from different hospitals in Metro Manila who walked out of their shifts in protest.

Among their demands are the release of government benefits such as the release of their special risk allowance (SRA), meals, accommodation and transportation (MAT) benefits.

“The final countdown is over,” said Romeo Garcia, president of Research Institute for Tropical Medicine Employees Association-Alliance of Health Workers in a statement on Tuesday. “We waited 10 days for nothing.”

“No amount of benefits landed in our hands,” Garcia added. “Where did the billions of funds that were not used for our benefits go?”

Earlier, Health Undersecretary and treatment czar Leopoldo Vega on Wednesday admitted that over 100,000 out of 526,000 health workers have yet to receive their SRA.

In order to grow, Lowry believes young Raptors stars ‘have to take the criticism’