She has gone from a sweet Disney teen star to a daring global fashion icon. Selena Gomez never fails to serve looks, and her recent press tour outfits for her latest movie, Only Murders in the Building, have been nothing short of stunning.

On Wednesday, the 29-year-old multihyphenate star pulled out all the stops in a form-fitting orange midi dress as she headed to Serendipity 3 restaurant ahead of her appearance on Late Night with Seth Meyers. 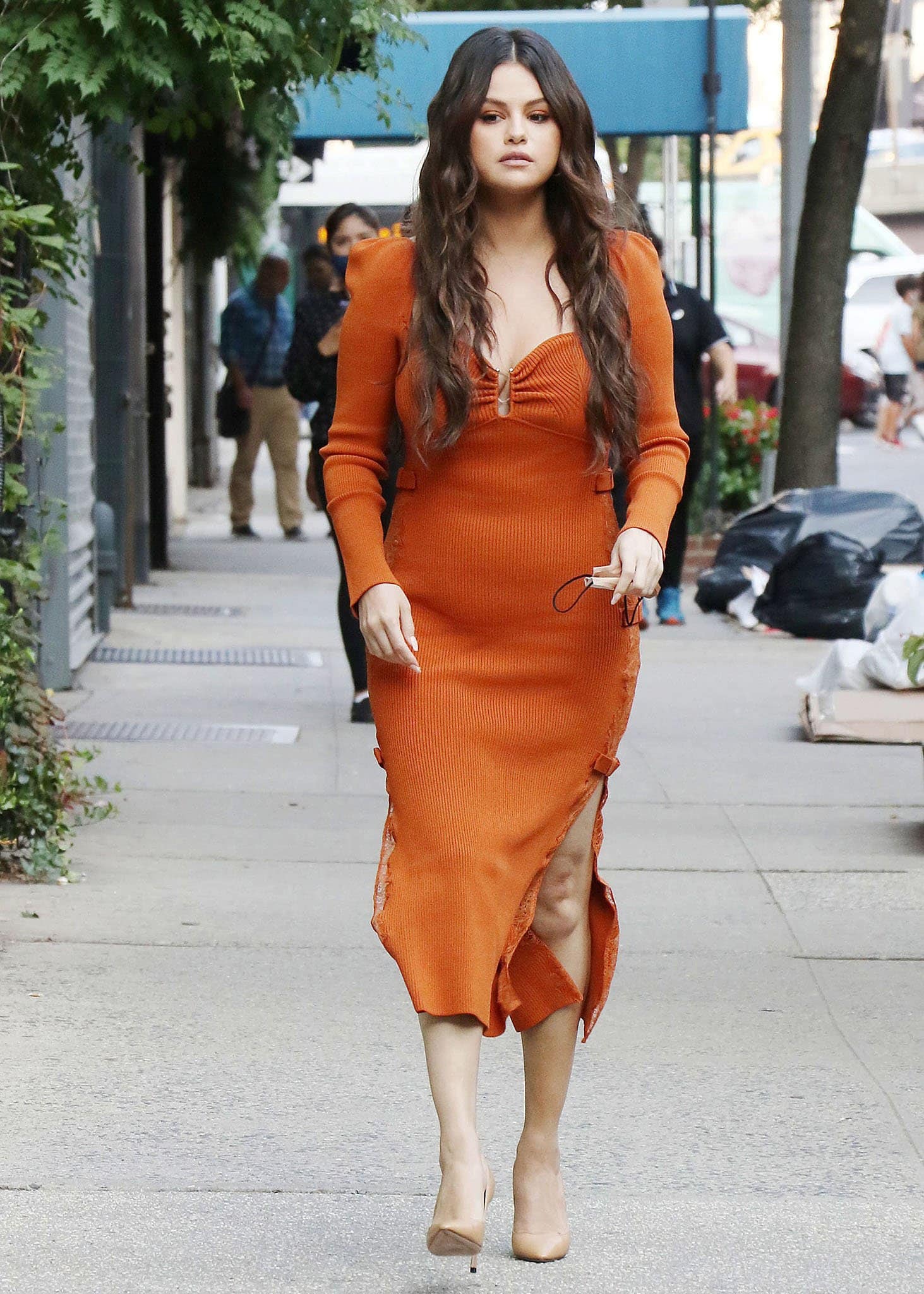 Ten percent of the proceeds from the $30 sundae will go to Selena’s Rare Impact Fund, which aims to increase access to mental health services in educational settings.

“I was inspired to create something for the menu. The ingredients of the sundae are some of my favorite go-to ice cream sundae toppings,” Gomez told Elle about her $30 ice cream sundae.

Arriving at the iconic dessert and food destination, Selena served a cinnamon Self-Portrait rib-knit midi dress that hugged every inch of her curves.

It showcased Selena’s ample cleavage and legs with its sweetheart neckline and thigh-high slits with sexy sheer floral mesh panels at the sides.

Her dress also features trendy puff shoulders with long sleeves and a ruched effect at the bust area. 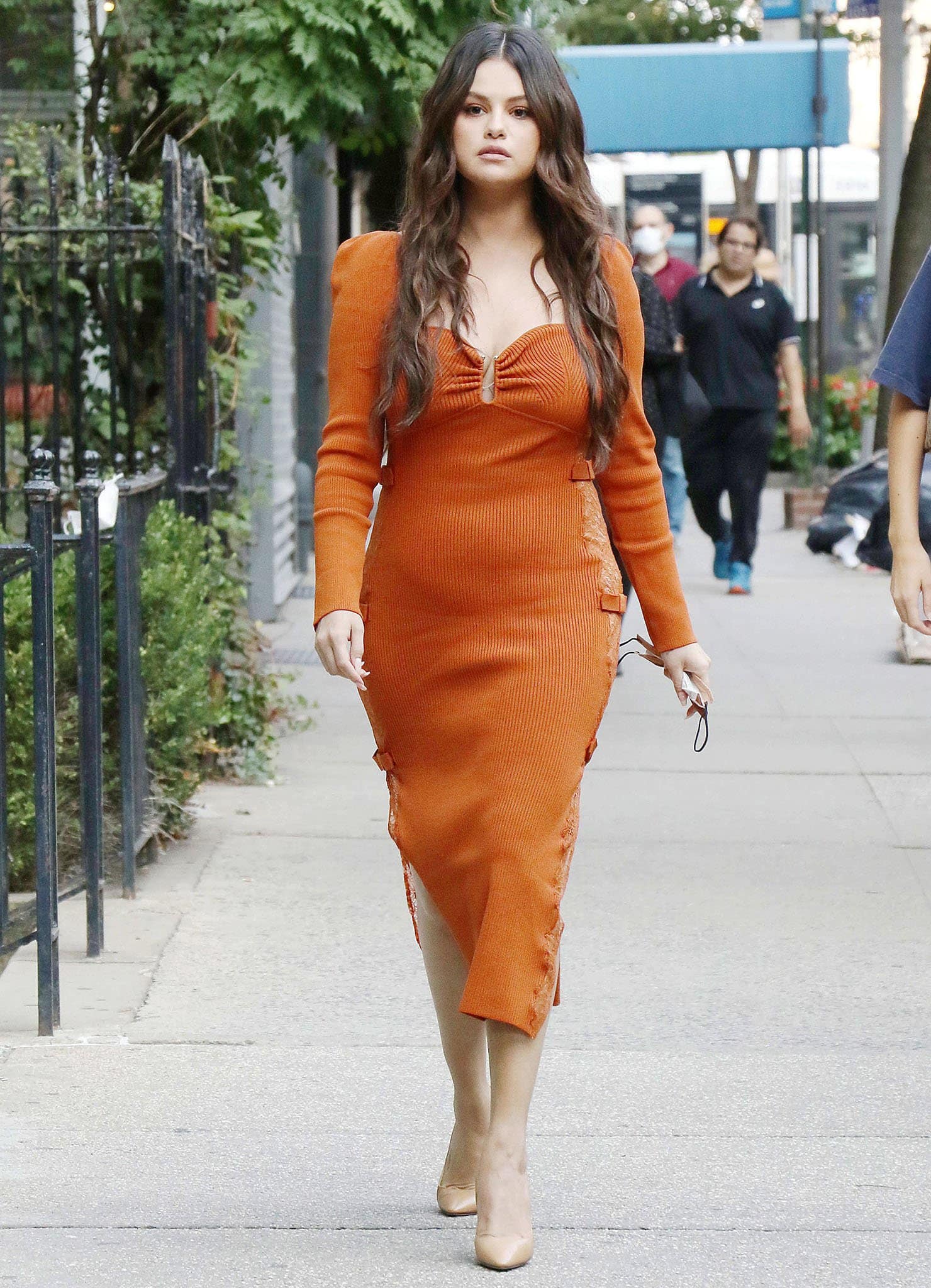 Letting her dress take center stage, Selena skipped the jewelry and simply teamed her eye-catching frock with a pair of nude pumps.

One of the designer’s most popular shoes, she wore the Jimmy Choo “Romy” pumps that feature a classic silhouette made of nude leather with pointed toes and about 3-inch stiletto heels. 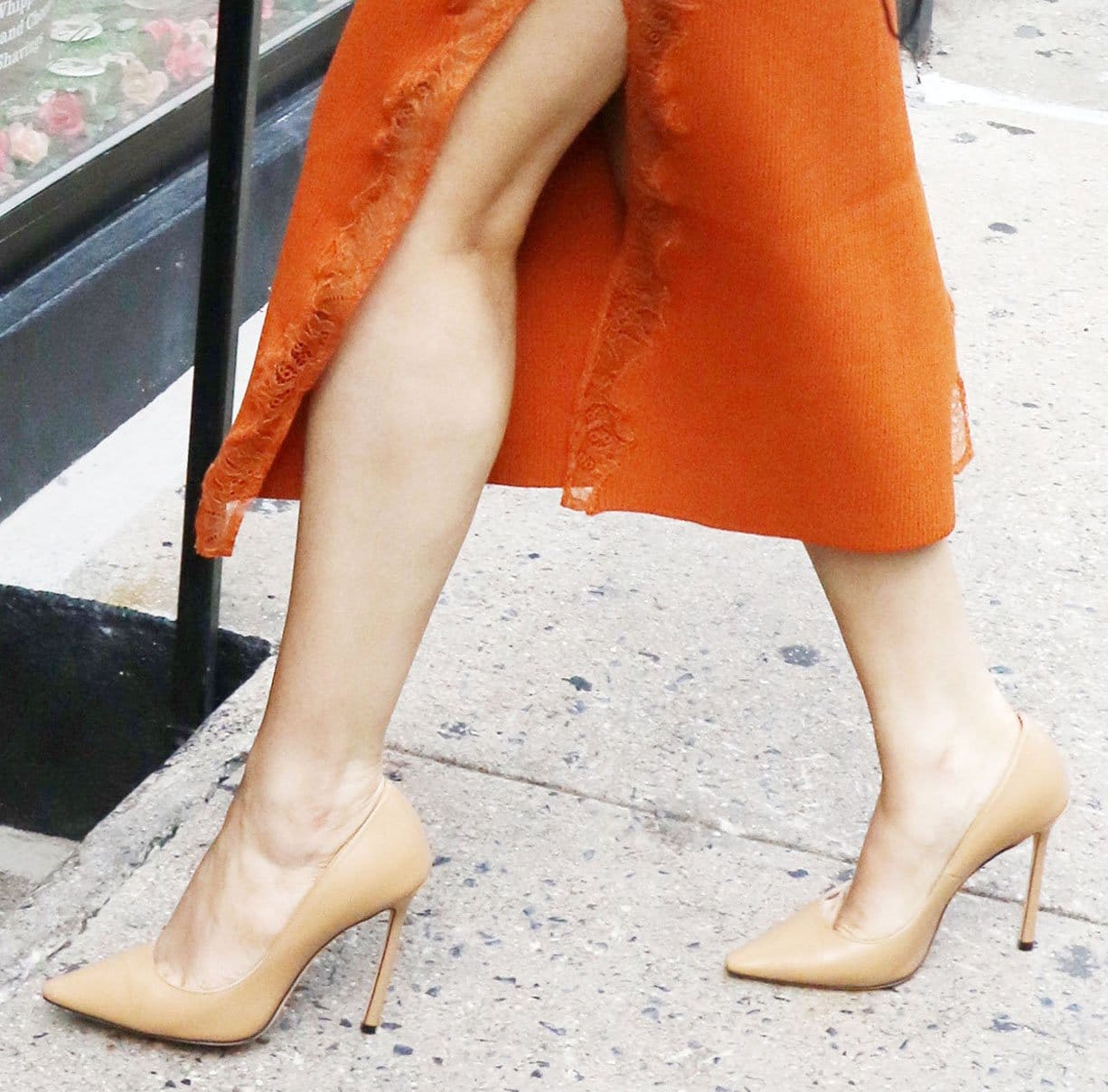 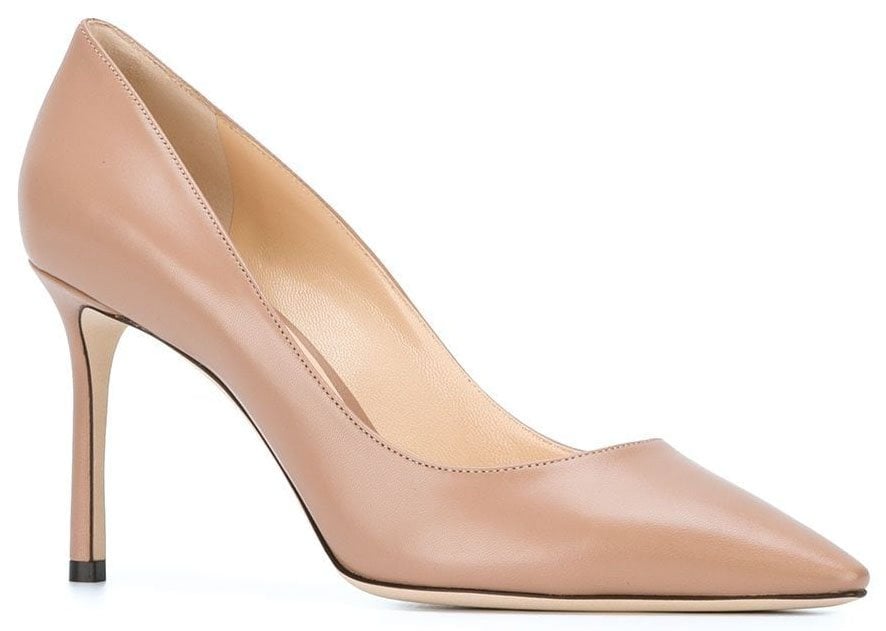 Beauty-wise, the Lose You to Love Me hitmaker wore her long brown tresses down in soft waves with a center parting. She looked fresh with minimal makeup that included winged eyeliner and a hint of orangey eyeshadow.

In her recent “Going-Out Makeup Routine” video for Vogue, the Rare Beauty founder revealed that she feels sexier with less makeup on.

“The older I’ve gotten, the more I realized that less is more. And that it makes me feel sexier when I don’t have as much makeup on.” She added: “You don’t need it to look beautiful because you already are beautiful.” 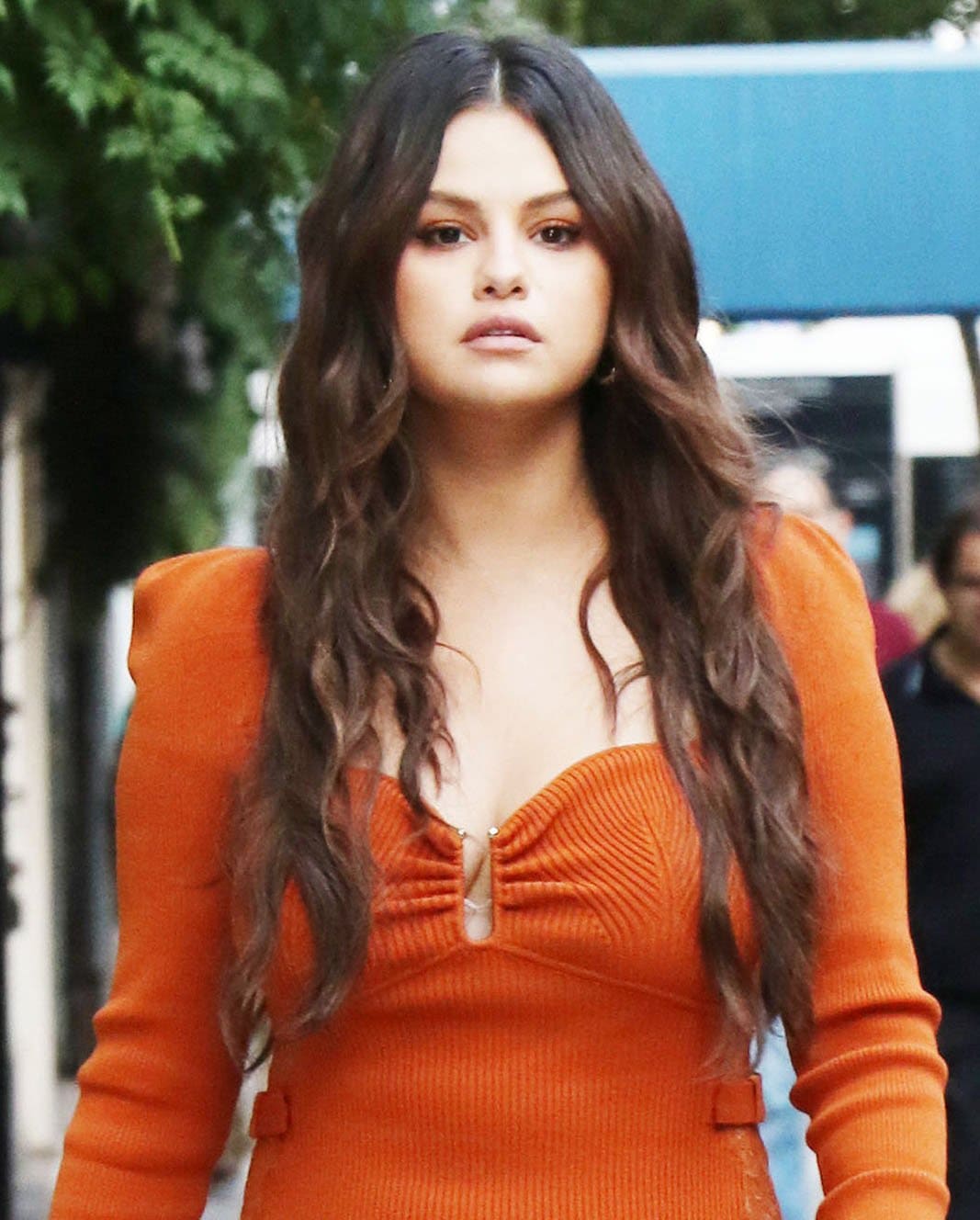 On Tuesday, Selena looked sensational while posing alongside her co-stars Steve Martin and Martin Short outside the Ed Sullivan Theater for their guest appearance on The Late Show with Stephen Colbert. 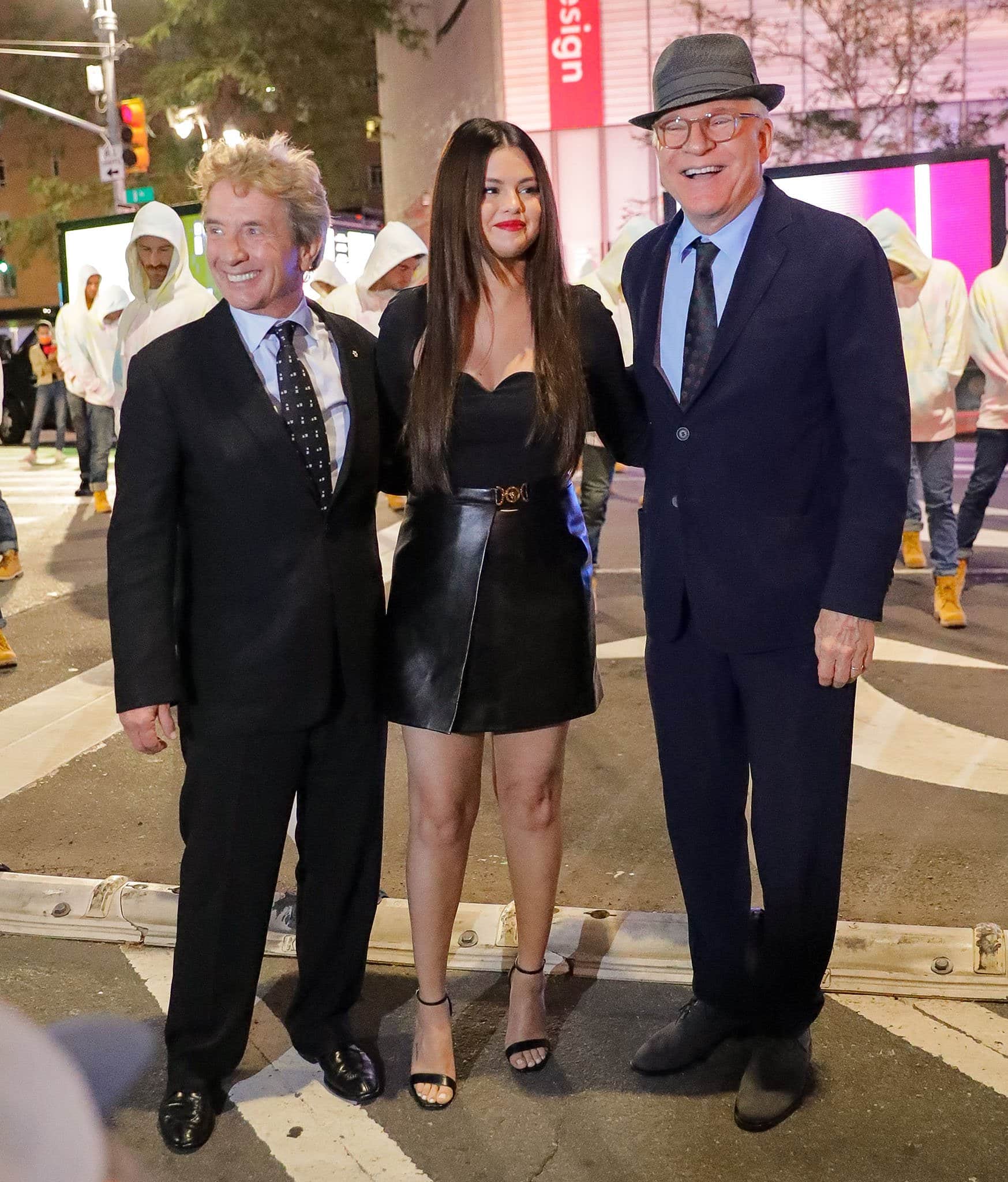 Martin Short, Selena Gomez, and Steve Martin at the Ed Sullivan Theater for an appearance on The Late Show with Stephen Colbert on September 7, 2021 (Credit: Mega / WENN)

Available for $2,195 at Farfetch, the rock-chic mini skirt features a gold Medusa plaque detail at the waist, a flattering wrap front, and a curved hem that’s cut several inches above her knees.

She paired it with a low-cut long-sleeved jersey bodysuit, also from Versace. It’s cut from smooth black viscose jersey and features a low-cut sweetheart neckline. You can get it for $895 at Net-A-Porter. 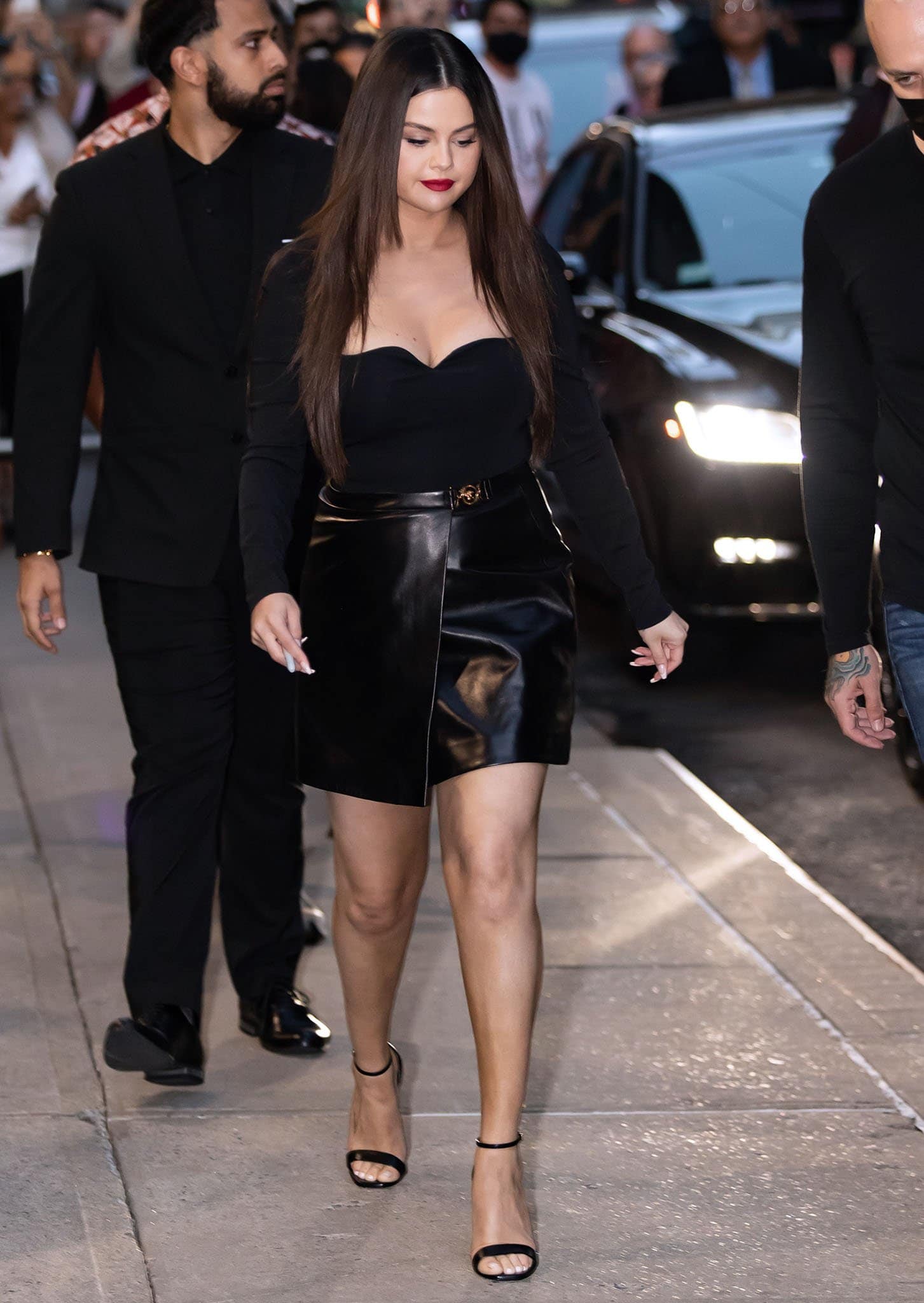 The Weeknd’s former girlfriend skipped the jewelry and continued with the sensual theme of her look by wearing a pop of bold red lip color and styling her long brunette tresses straight, cascading over her chest. 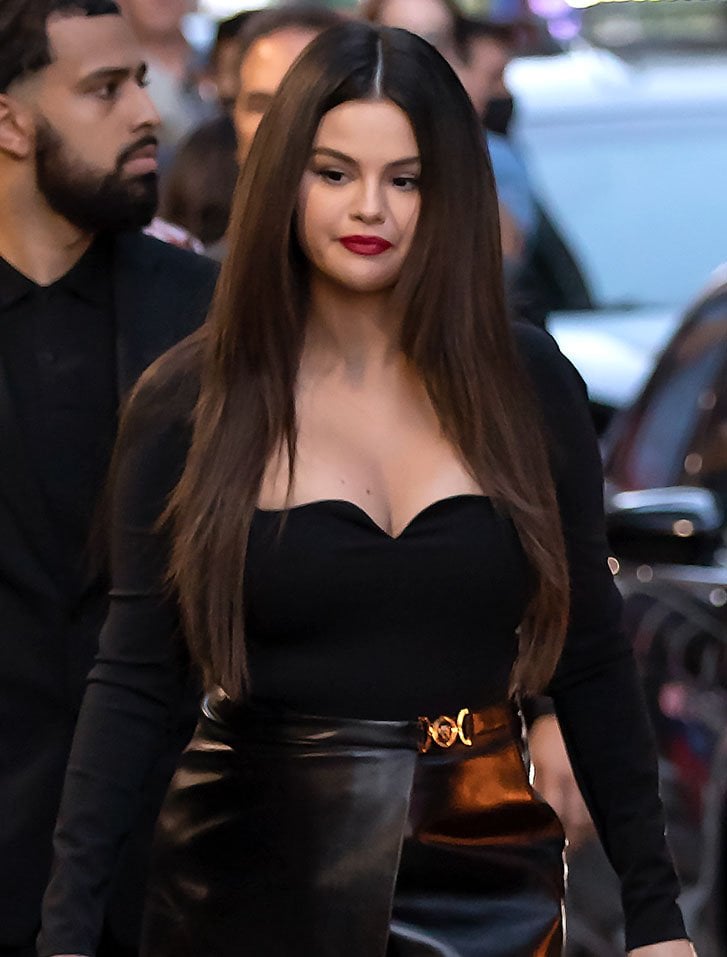 She then contrasted her sexy outfit with an $850 Aspinal of London Midi Mayfair bag in ivory white patent croc leather.

Completing her chic look was a pair of Saint Laurent “Amber” sandals, which put her “sunshine” foot tattoo on display. It was a tribute to her grandmother and was first seen on the singer in 2016.

Featuring a timeless silhouette, these sandals are crafted in Italy from black patent calf leather and feature a slim ankle strap, a square toe, red lining at the wide toe band, and a 3.5-inch covered heel. 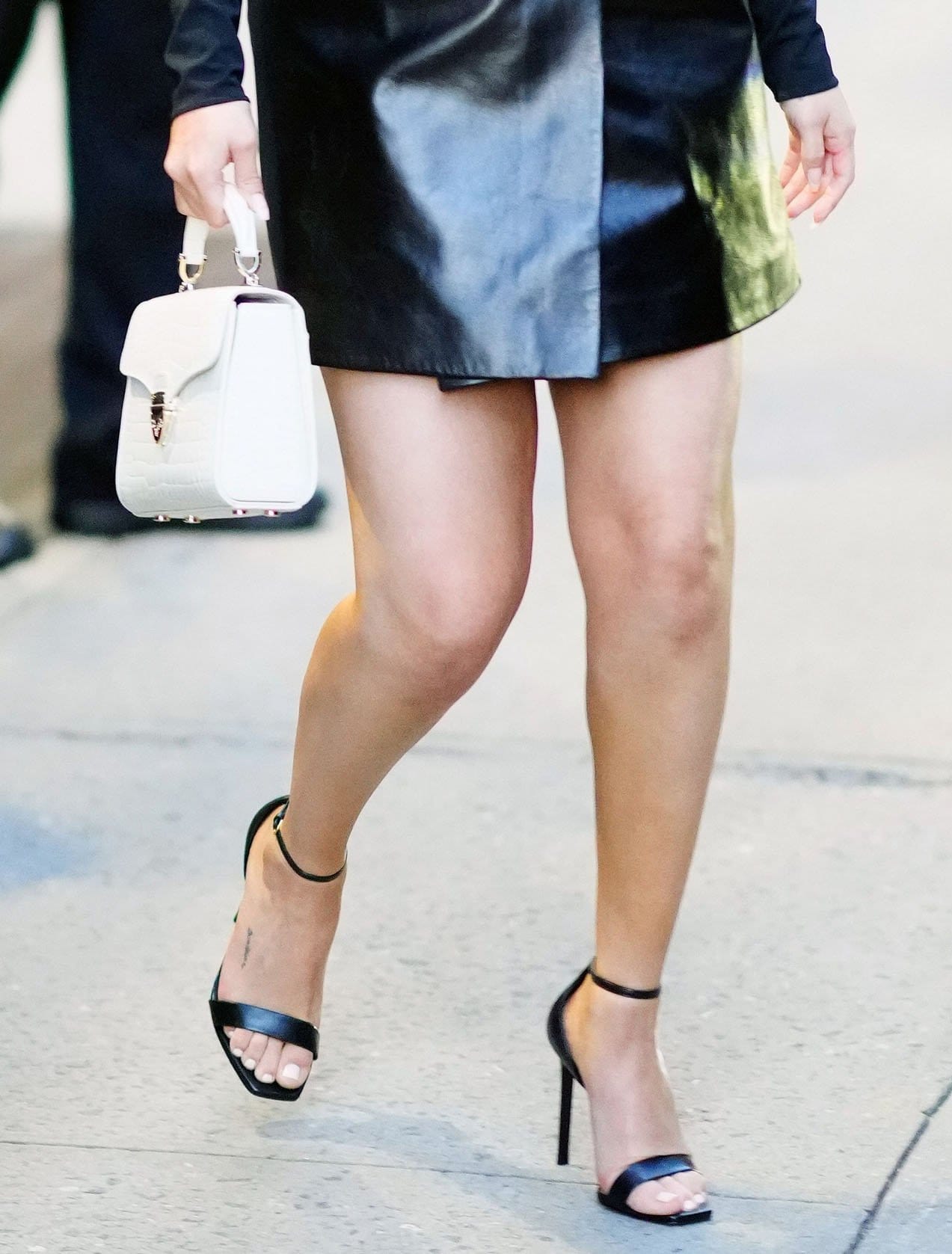 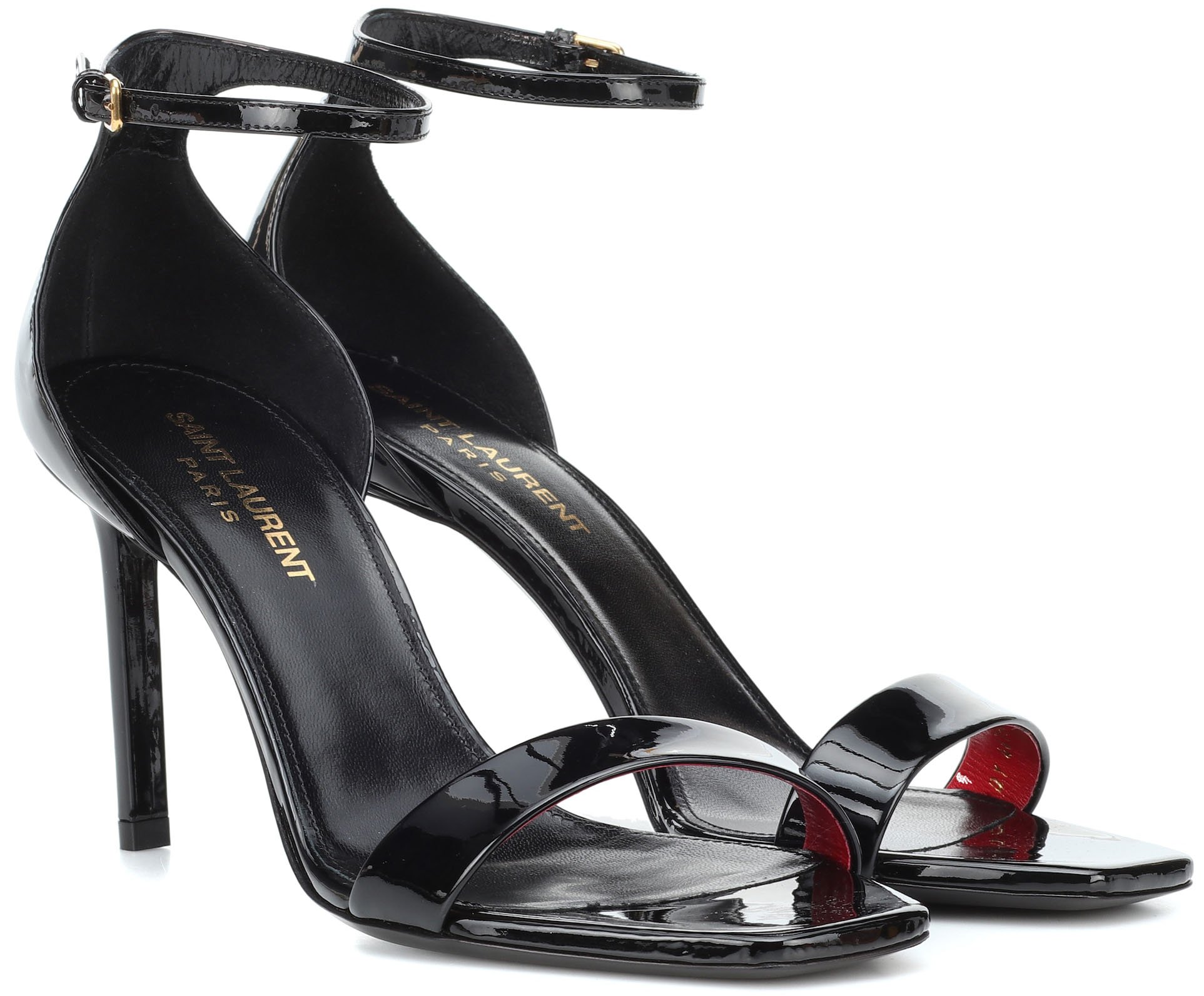 Earlier in the day, the July Moon Productions founder was pictured arriving at the studio in a similar all-black ensemble. 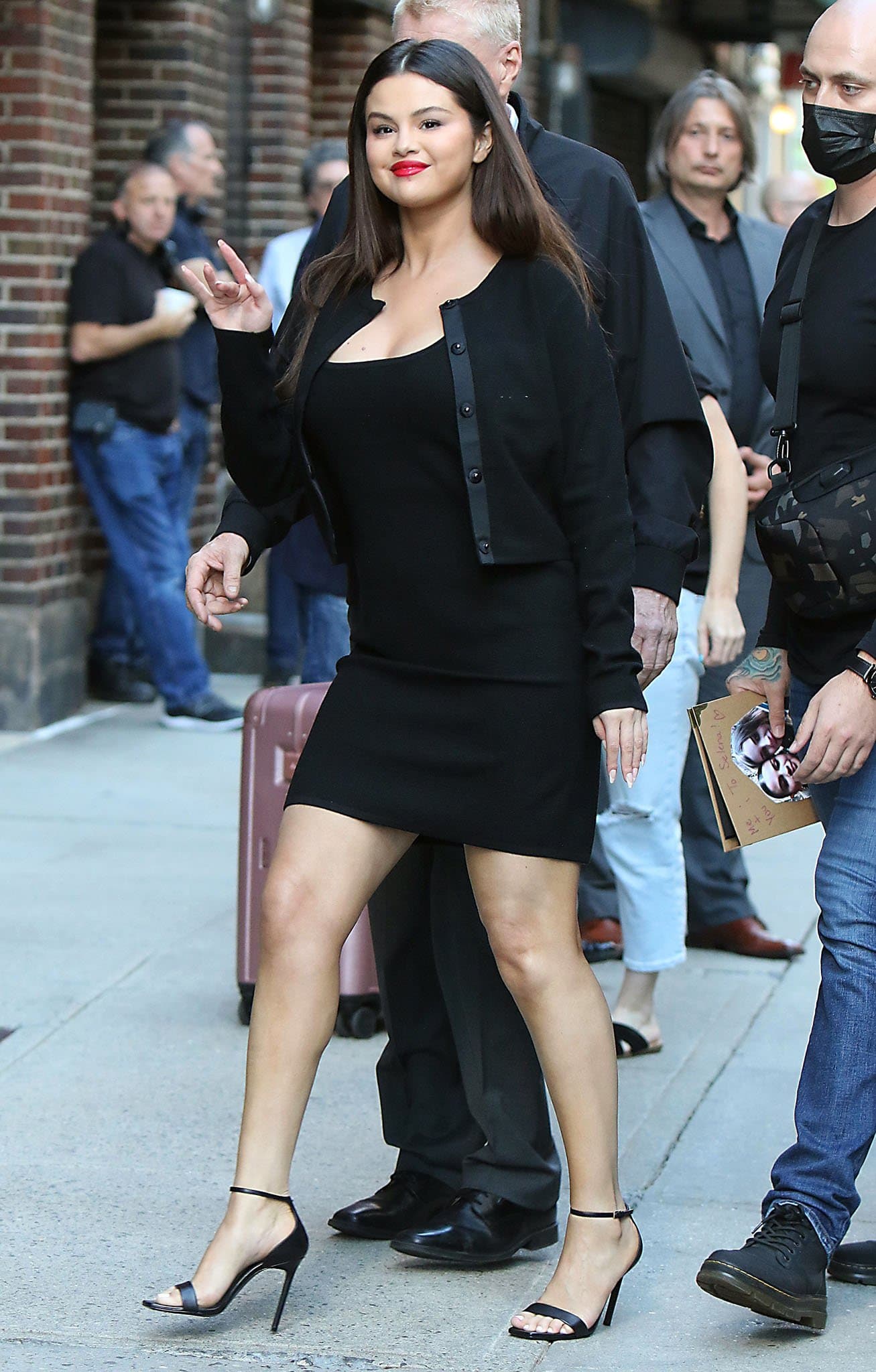 This simple sleeveless tank dress has a form-fitting silhouette made from ribbed merino fabric. It also has a scoop back, a straight neckline, and a hem that fell to her thighs. It’s available for $395 at Saks Fifth Avenue.

She wore her sexy frock underneath a matching ribbed merino wool cardigan also from the same brand. It has a straight silhouette with a sheen front placket, a round neck, and long sleeves and can be purchased for $395 at Saks Fifth Avenue. 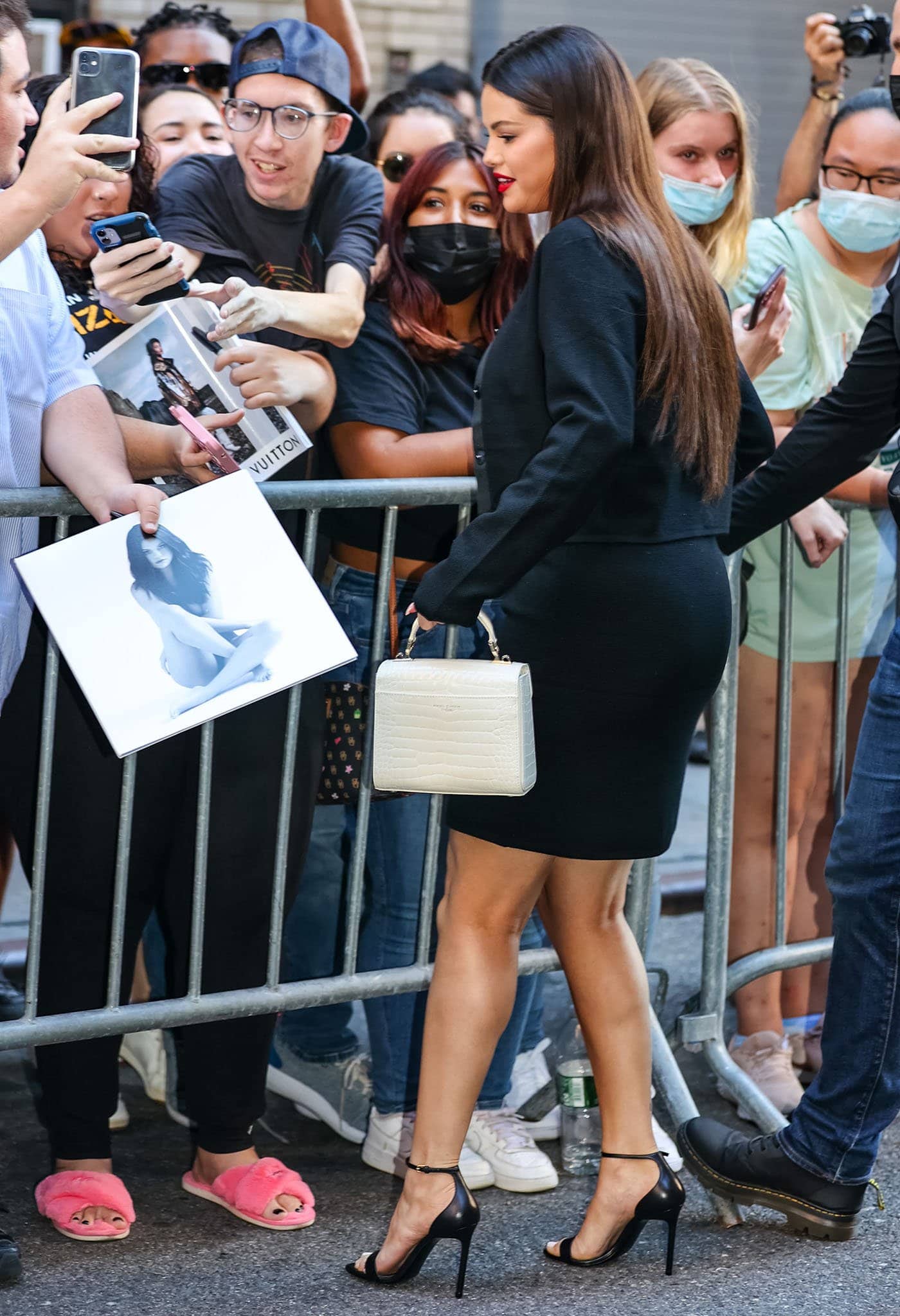 Keeping the rest of her look simple, Selena let her brunette hair fall loose around her shoulders and wore minimal makeup with red lipstick for a pop of color.

She then rounded out her head-to-toe black ensemble with the same Saint Laurent “Amber” heels. 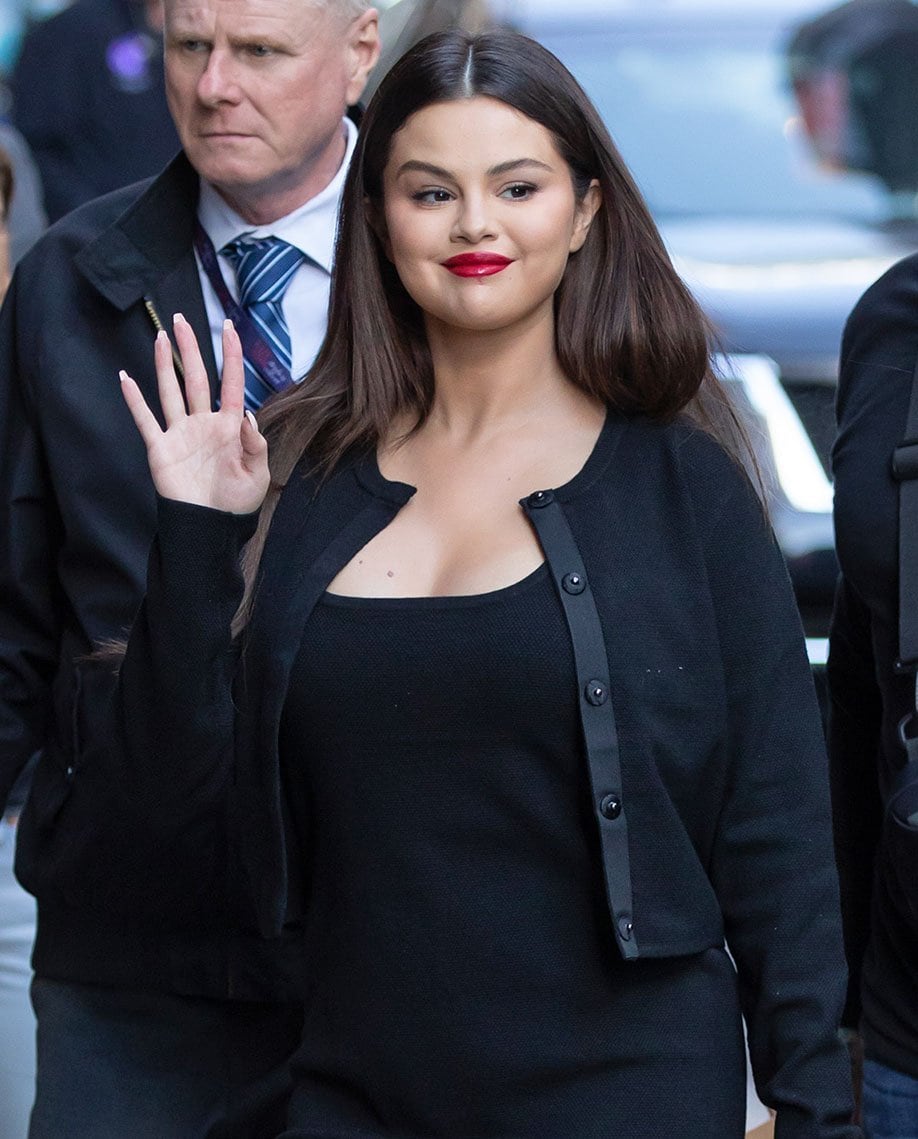