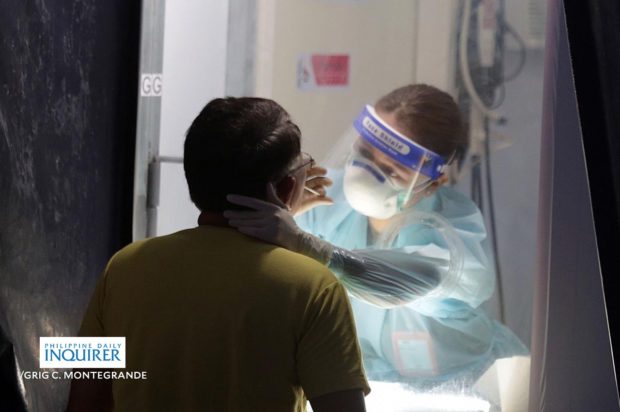 A health worker performs a swab test on a man at the Philippine Red Cross in Mandaluyong City on Thursday, Sept. 24, 2020. (File photo by GRIG C. MONTEGRANDE / Philippine Daily Inquirer)

MANILA, Philippines — The Department of Health (DOH) should look into the alleged “false positive” COVID-19 test results from the Philippine Red Cross (PRC), President Rodrigo Duterte said in his weekly taped briefing that aired on Monday.

Duterte said this as he again lambasted Sen. Richard Gordon, who is the Red Cross chair and also chair of the Senate blue ribbon committee investigating alleged anomalies in the government purchase of medical supplies from Pharmally Pharmaceuticals Inc. last year.

Michael Yang, a former economic adviser of the president, is said to be one of the financiers of Pharmally, which he denied.

He noted that 44 out of 49 hospital personnel who were tested in PRC laboratories initially tested positive but turned out to be negative for the coronavirus in another molecular laboratory.

Meanwhile, 187 out of 213 personnel of the Presidential Security Group also tested positive for the coronavirus when they get tested in a PRC laboratory in Manila but later on tested negative in a confirmatory test.

The president did not say when the tests were administered.

According to him, personnel of the Department of Finance (DOF) also had false-positive tests — that is, 13 of its employees received positive COVID-19 test results last Feb. 10  but tested negative in confirmatory tests within 24 hours.

“The problem here, Dick, is what happens to those people accepted that your RT-PCR test on them is positive when all along they are negative because they have no money and were just following [the results]. They had to endure confinement of two weeks when all along they really tested negative,” he said in a public address on late Monday night.

“Maybe the DOH must investigate this matter. You could be putting more people at risk. You could be falsely adding to the total positive cases per day of this country,” he added.


For more news about the novel coronavirus click here.

What you need to know about Coronavirus.

The Inquirer Foundation supports our healthcare frontliners and is still accepting cash donations to be deposited at Banco de Oro (BDO) current account #007960018860 or donate through PayMaya using this link .

Normal Delivery? 12 Changes In Your Body

Bulls face Nuggets with eye on top spot in East