Twitter did not disappoint when one user seemingly stirred up a controversy between two of our favorite starlets.

Movie studios have picked up on the on-screen chemistry between actor and comedian Adam Sandler and leading ladies like Jennifer Aniston and Drew Barrymore.

Their ability to breathe life into romantic comedies has led to the pairs being cast across several movies together.

And we are here for it.

One Twitter user, @bre_newcomer, finally said what we’ve all been thinking: “Name a better duo in a movie than Adam Sandler and Jennifer Aniston. I’ll wait.”

It didn’t take long for the Twitterverse to remind us about the undeniable magnetism between Adam Sandler and actress Drew Barrymore. How could we have forgotten the pair’s filmography that ranges the better part of two decades?

The Story of Drew and Adam

Drew Barrymore first starred as Sandler’s love interest, the hardworking and naive Julia, in The Wedding Singer, which hit the box office in 1998. The two were hitting pivotal points in their career at that time. 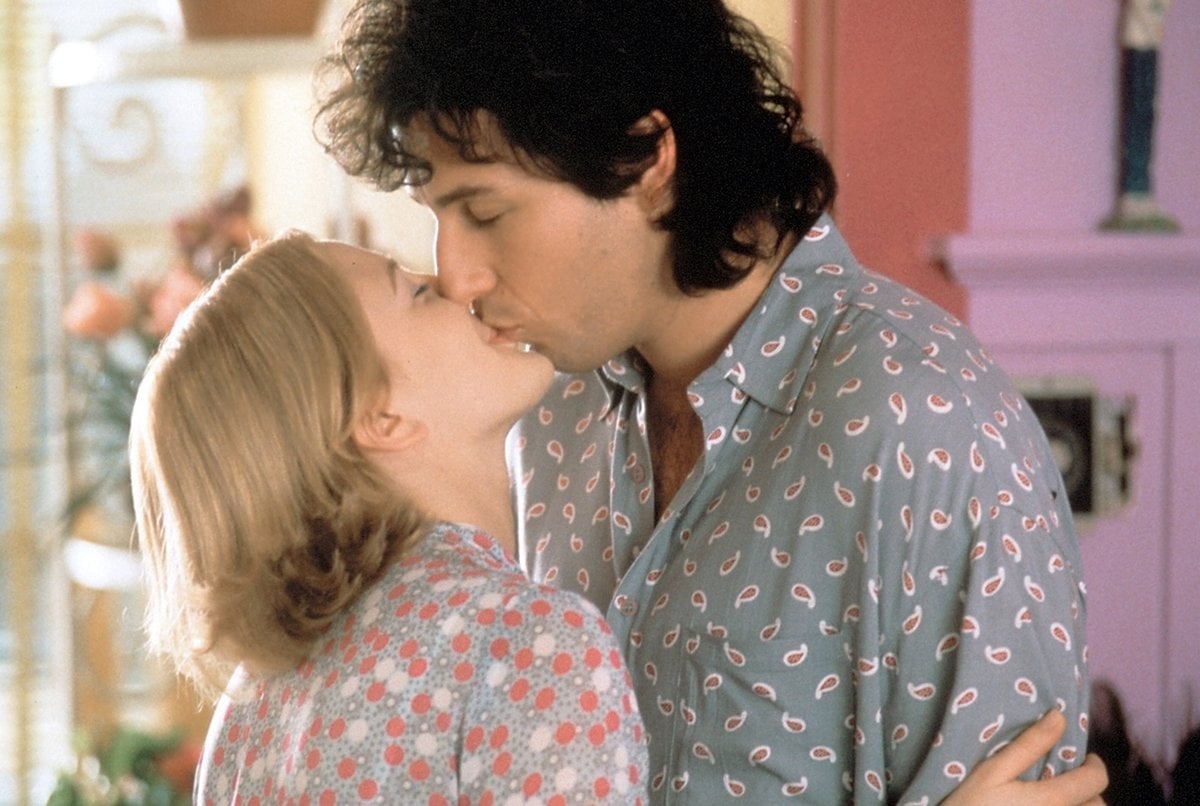 Drew was returning to the big screen as a leading lady after a rocky personal life following her career as a child star. Adam was stepping out of his sometimes abrasive, slapstick roles following his departure from Saturday Night Live. A calmer, more mature Sandler was ripe for transitioning into a more complex and relatable lead in romantic comedies.

Sandler is quoted as saying that his on-screen relationship with Drew “Made it seem like girls were allowed to like me in movies.”

Barrymore admits to having “stalked” Adam leading up to the project, believing that they were destined to work together. 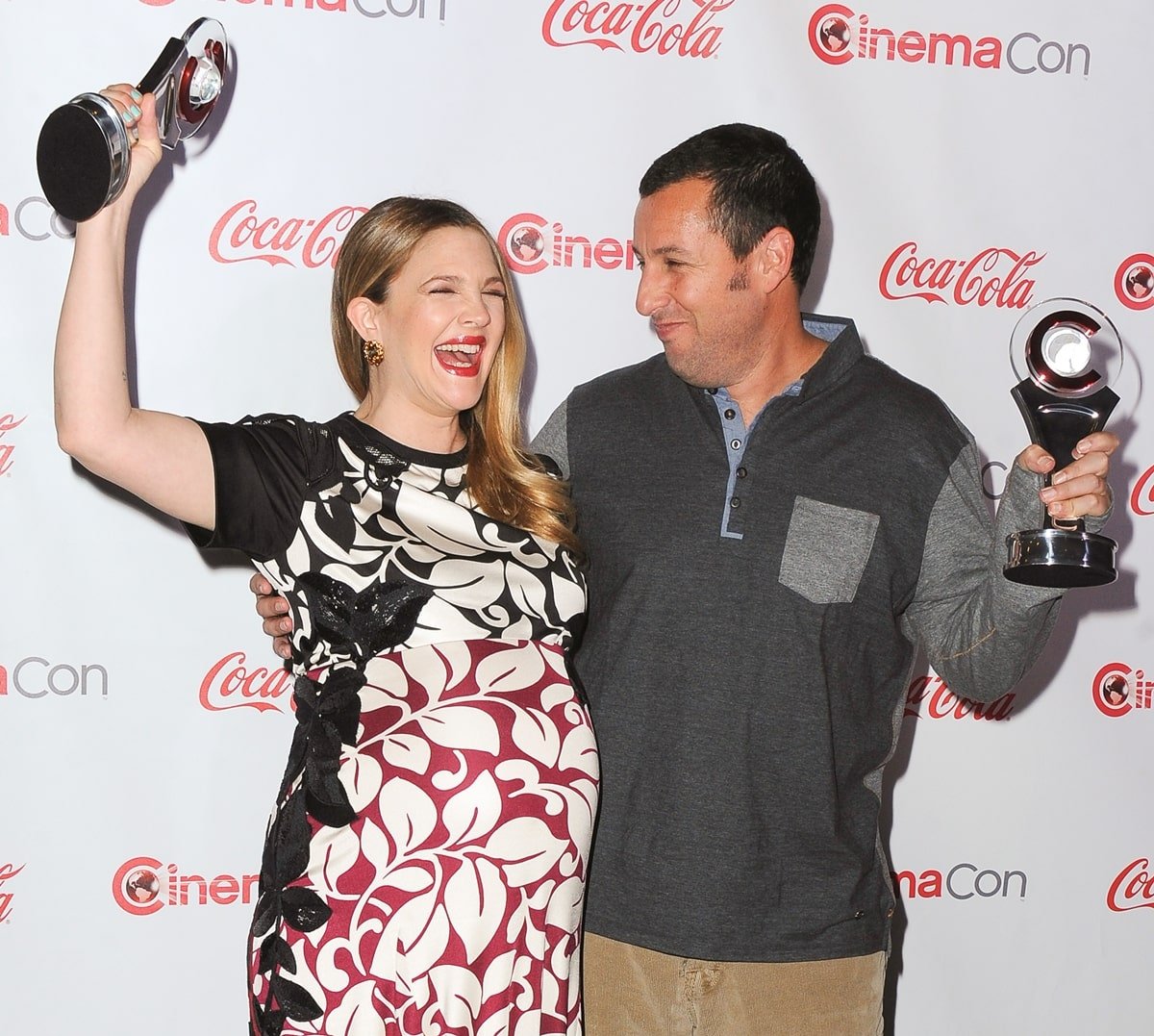 Drew Barrymore and Adam Sandler picked up the Female and Male Star of the Year awards for their romantic comedy Blended at the 2014 CinemaCon Big Screen Achievement Awards held at The Colosseum at Caesars Palace on March 27, 2014, in Las Vegas (Credit: Bridow / WENN)

As cameras quickly captured that spark, they were again cast opposite in another rom-com staple, 50 First Dates, where Adam fought to woo Drew’s character, Lucy, (and her protective family!).

Most recently, the two were cast in Blended where they and their families created an unpredictable match on an African vacation. While there have been rumors of the two rekindling their on-screen romance, both have been tight-lipped about any upcoming projects together.

You might be surprised to know that Adam and Jennifer knew each other for years before appearing on screen together; however, it’s much more innocent than it sounds.

The two costars apparently shared a common group of friends in their teenage years before either jumped into show business.

It was only years later that Jennifer Aniston was cast alongside Adam as his assistant, Katherine, in Just Go With It. 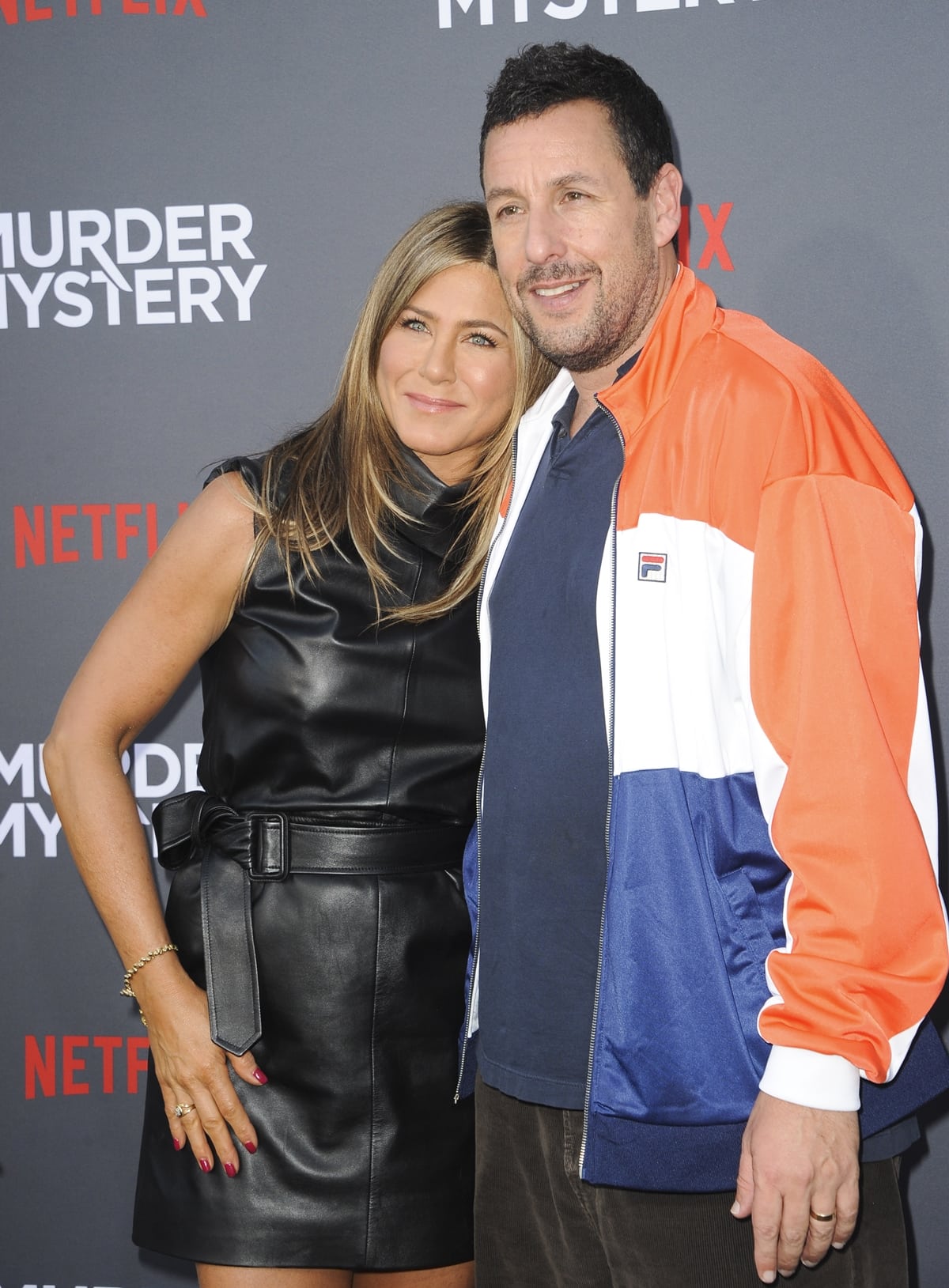 Aniston describes working alongside Sandler as “heaven” and “a dream,” while recounting evenings by the pool and antics that went on during filming in Hawaii.

The two also have spoken in interviews about the time they spend with each other’s families and intermingling friend circles.

In 2019, the two teamed up in Netflix’s Murder Mystery, with Jennifer appearing as Sandler’s wife, Audrey. The action-packed flick is teeming with intrigue, sports cars, yachts, and of course, the brilliant pair showing that effortless chemistry on screen.

While it’s unclear if Drew and Jennifer are friends off stage, the two appeared in He’s Just Not That Into You, a 2009 flick that packed an enormous amount of star power. It doesn’t appear that they’ve worked on other projects together.

As small as Hollywood is, A-list celebrity circles tend to run even smaller, so it’s not unrealistic to assume they’ve crossed paths before.

The seemingly innocuous tweet claiming Jennifer Aniston and Adam Sandler as the best on-screen duo churned across the internet, unresolved, for almost a year before the ladies put an end to the dispute.

Following the inception of her new show, The Drew Barrymore Show, Drew sorted out the debate in front of a live audience alongside her guest and longtime friend, Jennifer Aniston.

After a gracious welcome to the stage and a quick recap of Jennifer’s journey to stardom, Drew brought up their common denominator: Adam Sandler.

“The Sandman,” Jennifer quipped. “He’s a unicorn because he is a joy- he walks with joy. He never gets moody,” she went on.

As a fan of their movies, it’s such a relief for us to know Sandler really can be the same delight off-screen that he seems to be on-screen. But Drew pauses.

“Okay, so there’s this Twitter debate that happened about who is a better partner for Adam Sandler: Jennifer Aniston or Drew Barrymore?” Drew explained with a quirkiness that only Drew could deliver.

“And what I loved about what came out of that was,” Drew hesitated, looking meaningfully at Jennifer.

“WHAT?” Jennifer interjected, gripping her armchair in anticipation. “That you and I chose each other!” Drew said.
Aniston alluded to the term, “Bros before hoes,” before Drew followed up with “I was going to say hoes before bros! And that is sisterhood.” 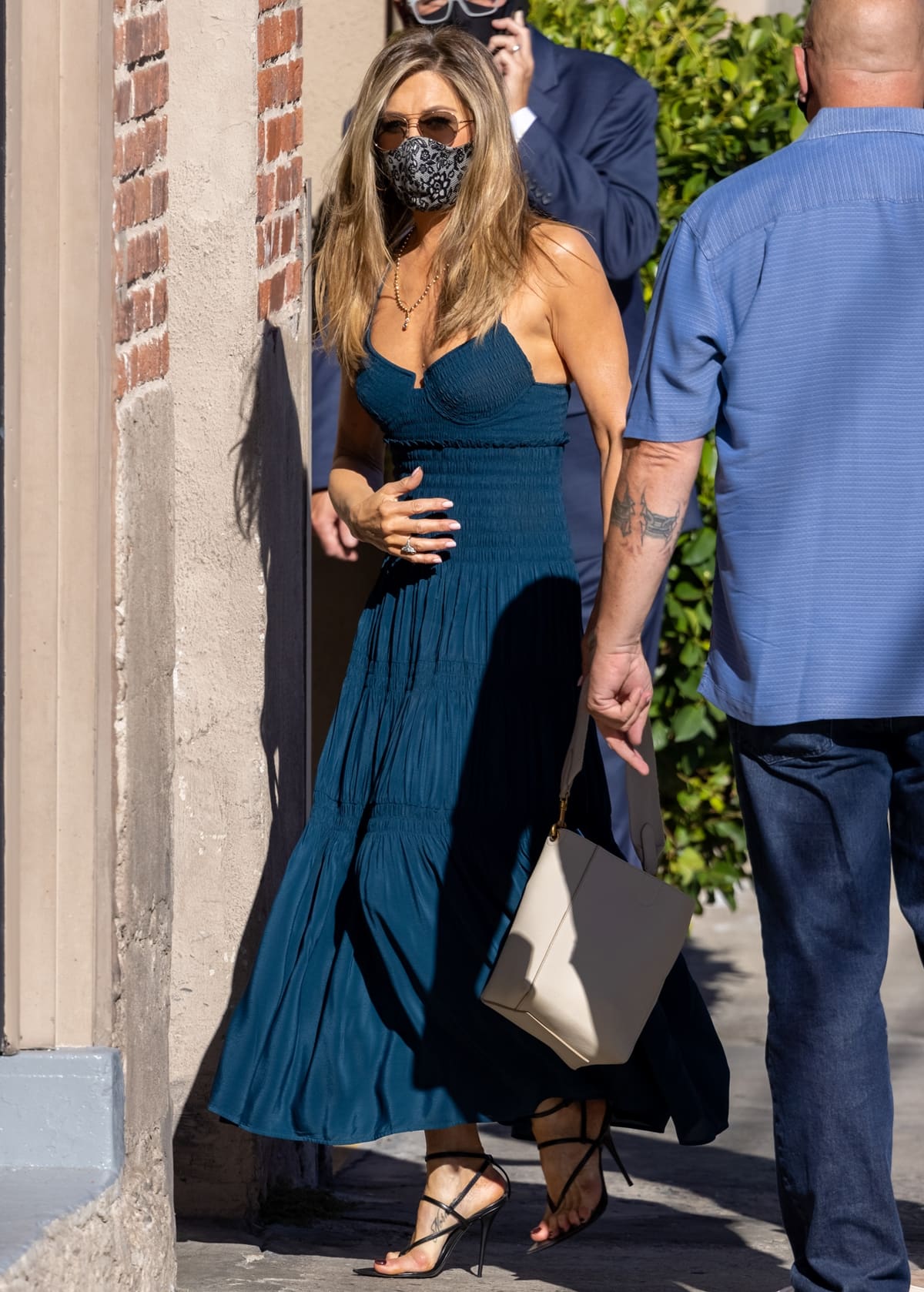 It looks like Adam Sandler had to sit out on this round. We loved seeing the two starlets sharing the same stage and putting this debate to rest, professing themselves as each other’s perfect match.

The only thing that could strum our heartstrings harder would be the ultimate romantic comedy: a collaboration between Sandler, Barrymore, and Aniston.

While we haven’t heard of one in the works- and it does seem like a missed opportunity- sources say that Netflix has a new project starring Adam Sandler and Jennifer Aniston in the works, following the success of Murder Mystery.

Whether or not Drew Barrymore will join them on screen has not been teased by either party. 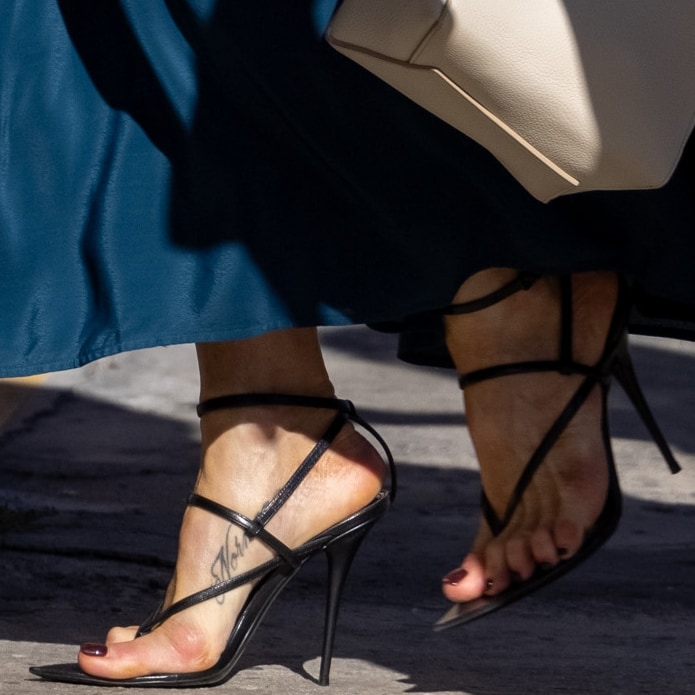 So with this dispute put to rest, we can let our minds wander to more pressing issues- like who is a better on-screen match for Drew: Jimmy Fallon or Adam Sandler? Or a better suitor for Jen: Ben Affleck or Adam Sandler?

This all got pretty involved. Maybe we should just let the ladies sort it out for themselves! 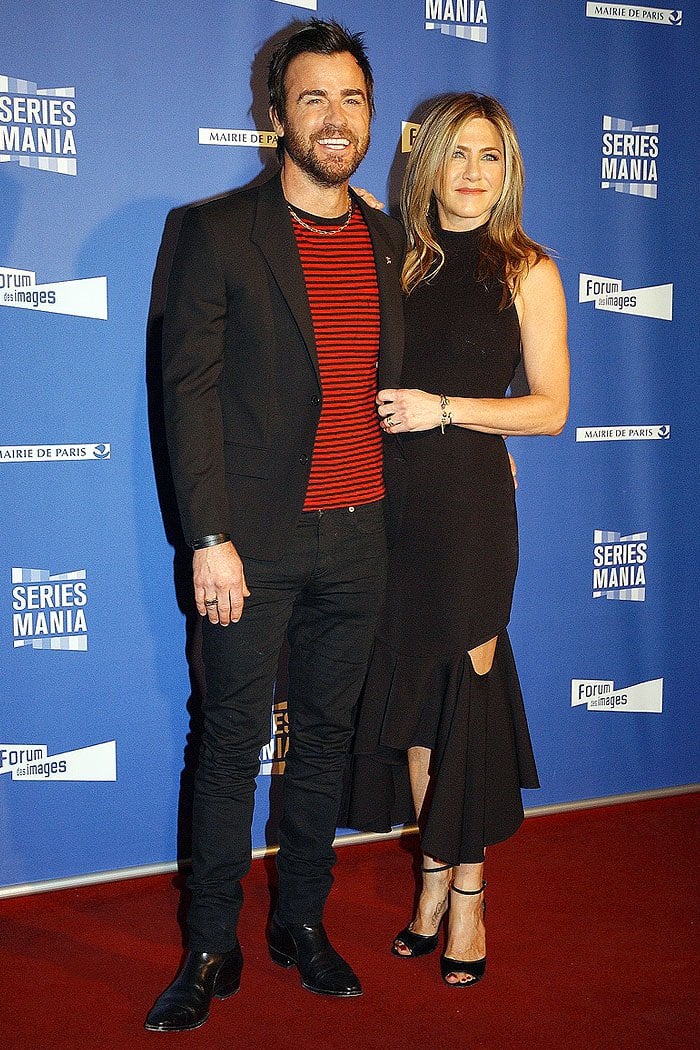 Jennifer Aniston and Justin Theroux sure cleaned up nice. After hitting up the Chanel store in their cool casual clothes in April 2017, the then-husband-and-wife team hit the red carpet for the opening night of the Series Mania Festival at La Grand Rex in Paris, France. 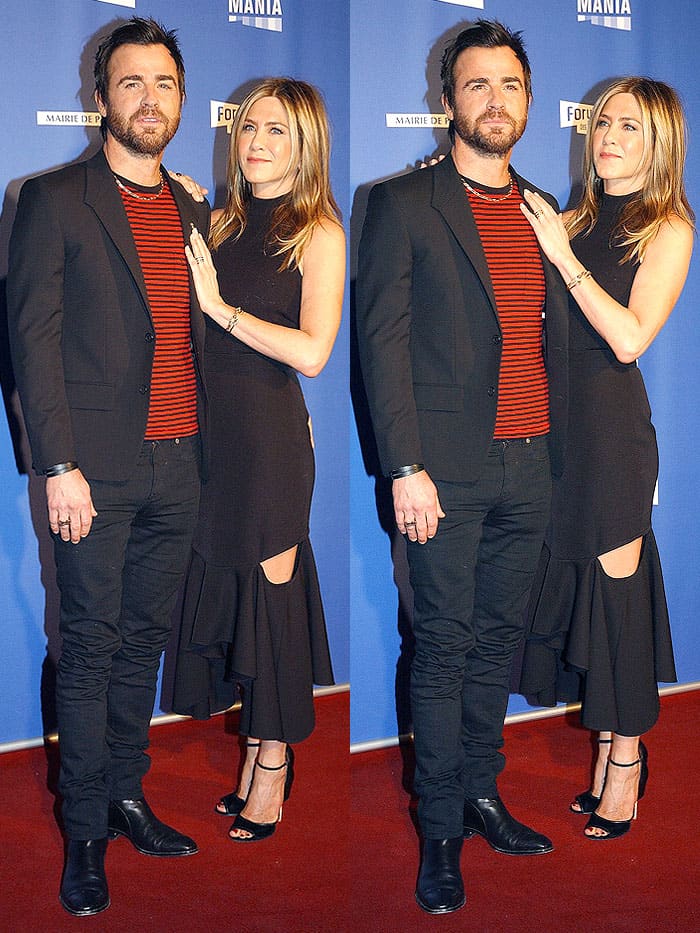 Jennifer Aniston’s ruffled midi skirt that looked like it was slashed at the thighs (Credit: WENN)

The coosome twosome, however, couldn’t resist adding a touch of their laid-back, effortless style to their dressy outfits. 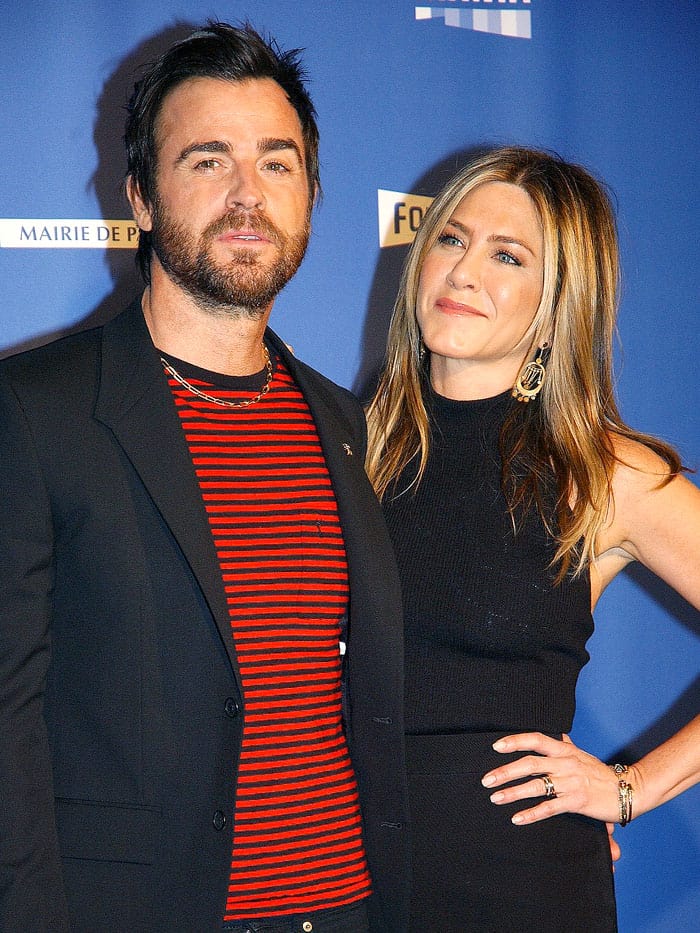 Jen in particular chose to wear a $1,795 Givenchy Pre-Fall 2016 ruffled midi skirt that looked like it was slashed at the thighs. 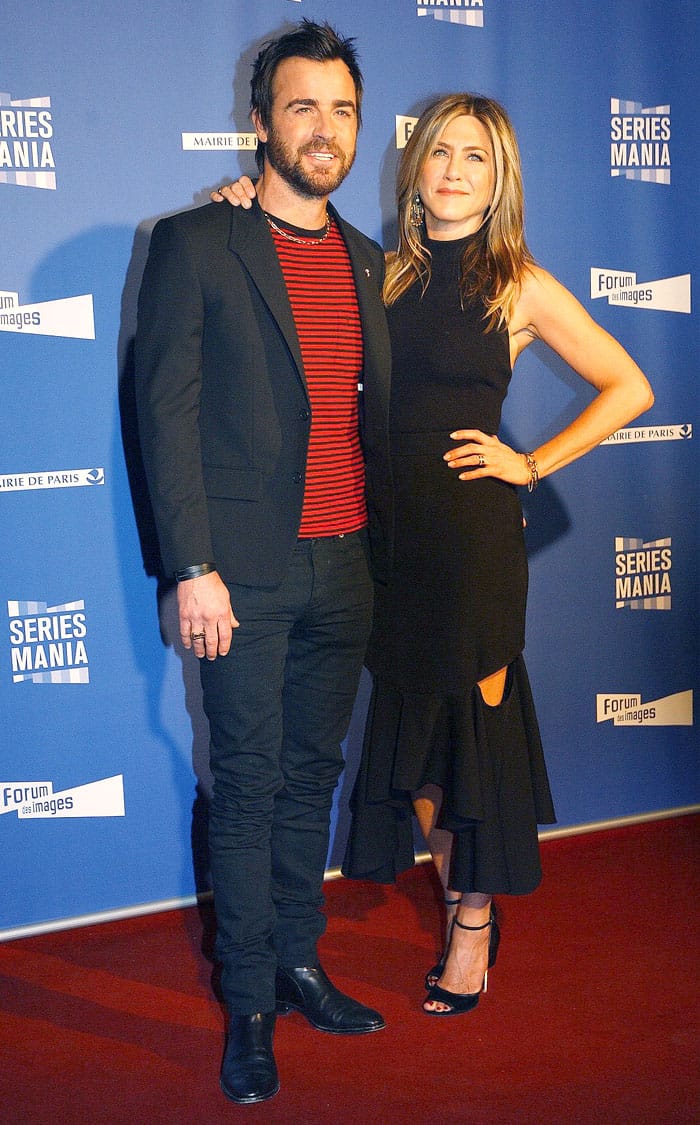 Jennifer Aniston and Justin Theroux started dating in 2011 and got engaged in August 2012 (Credit: WENN)

She further relaxed it down with a high-necked halter top made of black ribbed-knit fabric. 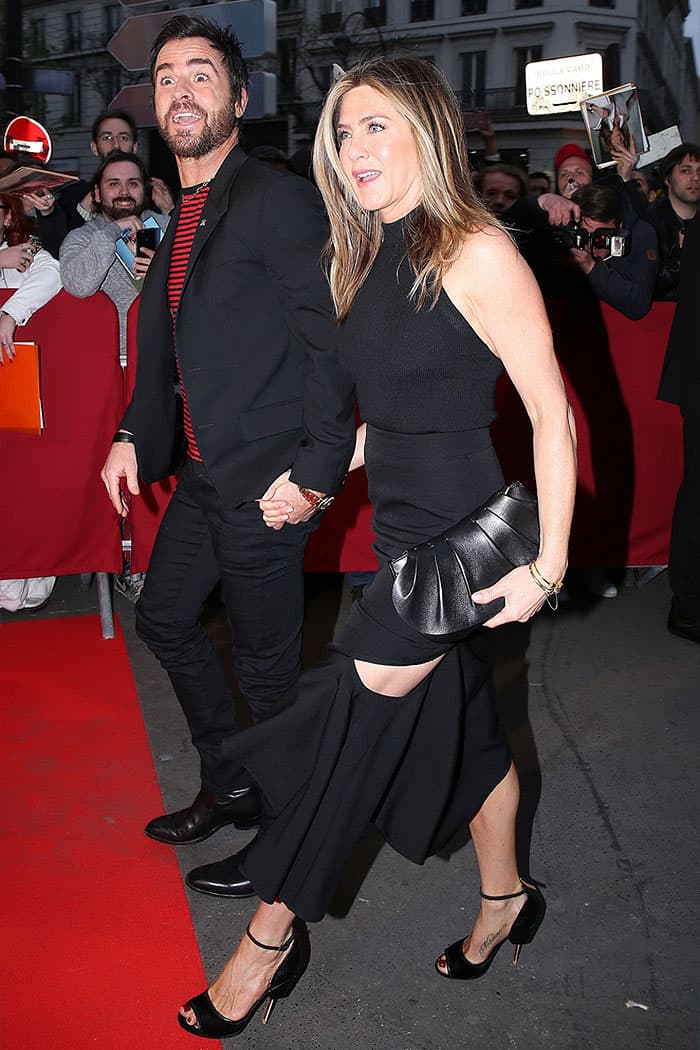 Jennifer Aniston and Justin Theroux announced their split in February 2018 after two and a half years of marriage (Credit: WENN)

The then 48-year-old actress rounded out her low-key glam getup with a black pleated leather clutch and Givenchy “Matilda” lizard-and-velvet sandals. 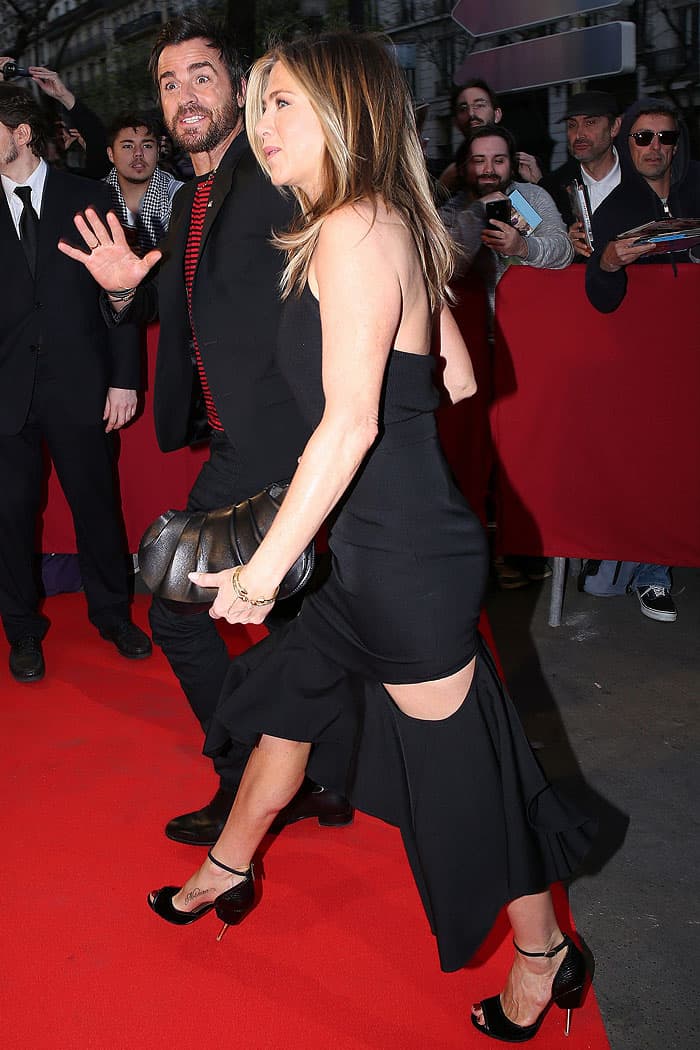 Jennifer Aniston and Justin Theroux at the opening night of the Series Mania Festival at Le Grand Rex in Paris, France, on April 13, 2017 (Credit: WENN)

Jennifer Aniston joins numerous stars including Selena Gomez, Kim Kardashian, Jada Pinkett-Smith, Irina Shayk, and Cate Blanchett as a fan of the Givenchy “Matilda” screw-heel sandals, which feature velvet on the straps and a lizard effect on the heels. 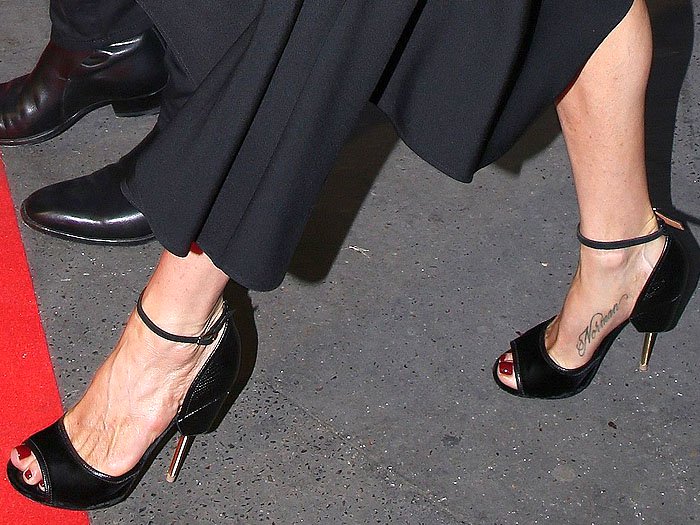 You can buy the latest shoes from the French luxury house at Nordstrom and Farfetch. 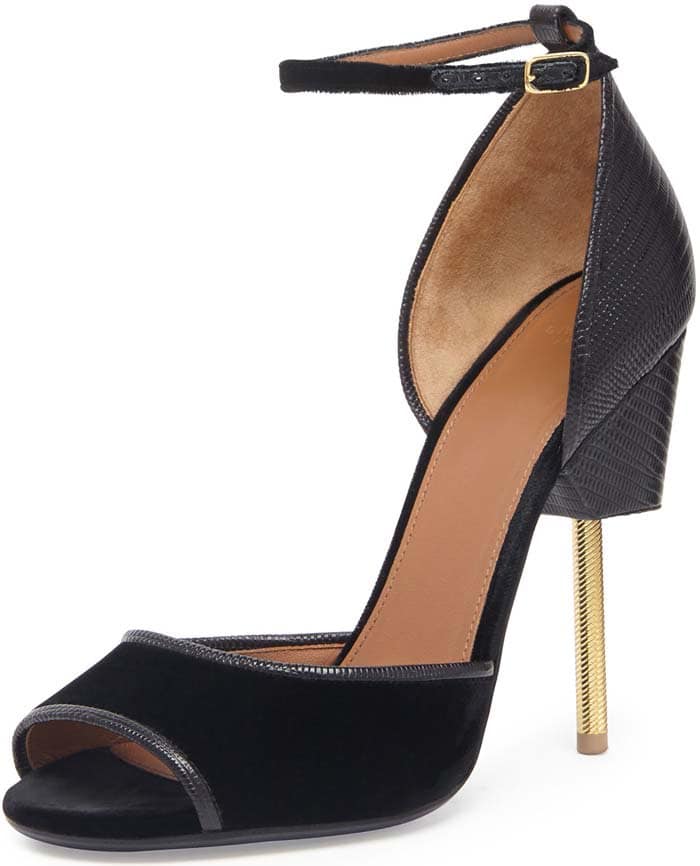 What Are Shoes Made Of?