But it is not any of these feature film movies or award-winning performances that brought Oscar Isaac and his wife, Elvira Lind, together.

Oscar Isaac and Elvira Lind had a private and quiet start to their relationship. Much of their dating life and even their marriage were kept quiet and out of the public eye. 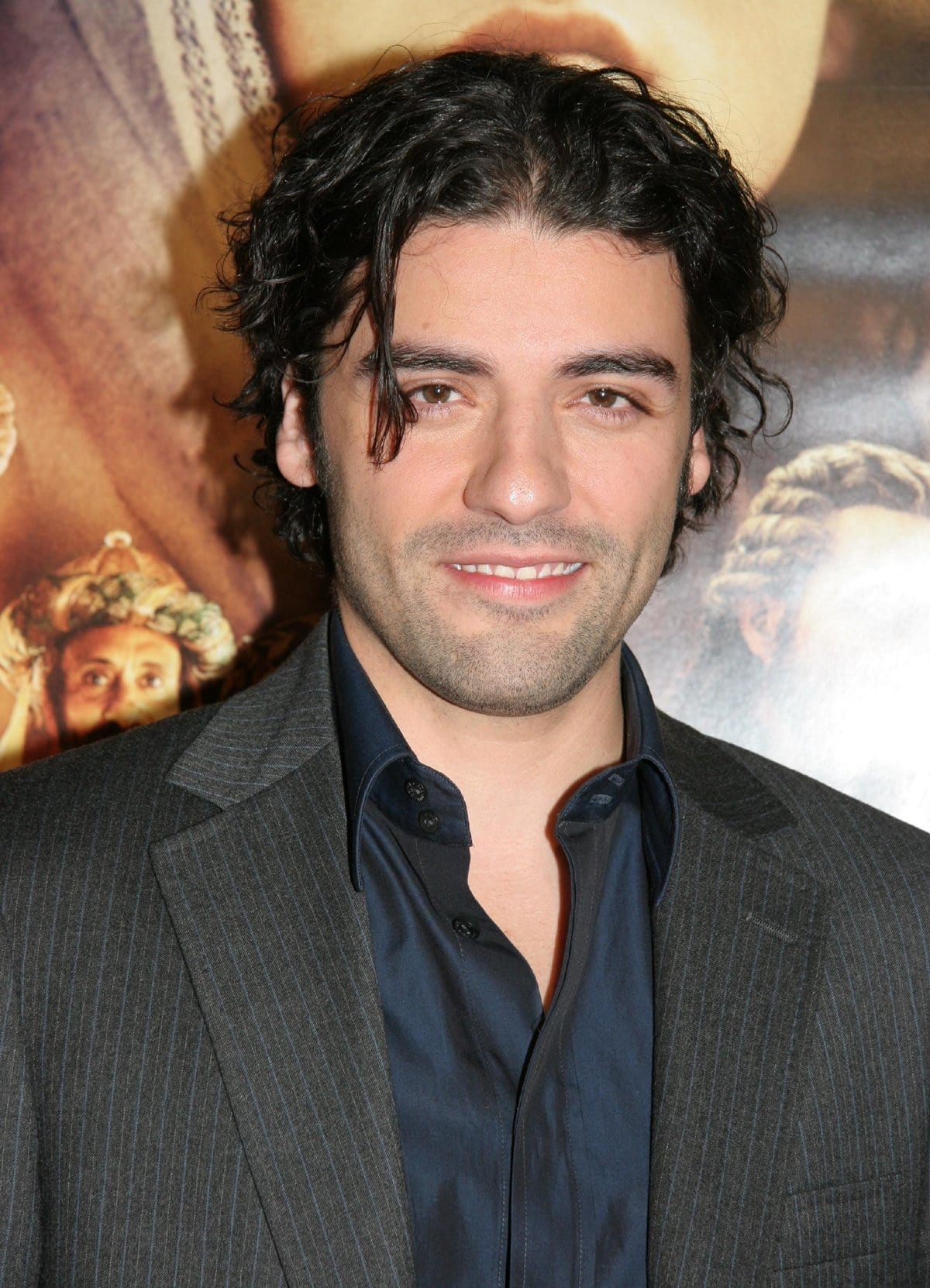 Oscar Isaac at the premiere of the 2006 American biblical drama film The Nativity Story (Credit: Rachel Worth / WENN)

They were in the same location while Oscar worked with Bobbi Jene Smith on a project titled Arrowed in 2012. Vogue magazine called Lind “Isaac’s then-girlfriend” at the time, so there is speculation that they were together before this event.

Lind was recording the performance that Isaac was performing with Smith. Lind later created a documentary with Smith called Bobbe Jean that has garnered her much praise.

In 2013, Oscar Isaac, Bruce Ferguson, and Elvira Lind were playing around with guitars and cameras. They moved their performance to a stairwell because the acoustics were better, which was the birth of a musical docuseries Lind produced.

Staircase Sessions became a creative documentary that recorded musicians playing one song in a stairwell that showcased the rawness of artists in unpolished performances. 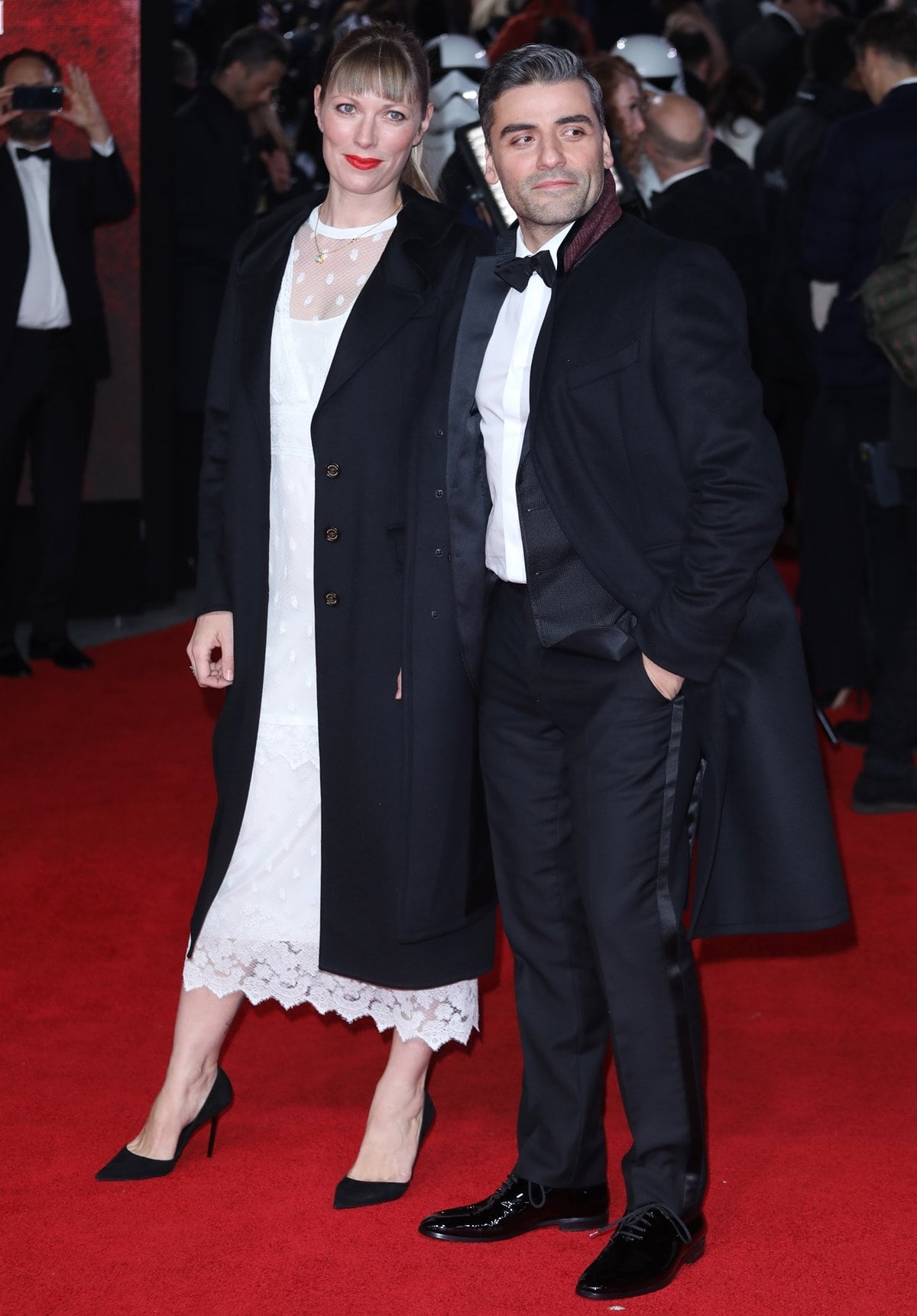 It was not until 2016 at the Golden Globes that their relationship was made public in the form of a red-carpet kiss which took the internet world and entertainment world by storm. Many were shocked that the “Internet’s Boyfriend” was suddenly in a relationship.

In 2017, they announced that they were married and expecting their first child, sending more shock waves through the internet and entertainment world.

In an interview with GQ, Isaac was unusually open about his reasons to marry Lind even though they kept most of their dating life private. One of the reasons for marriage was that they wanted to create a family unit for themselves and their child, even though marriage is not something necessarily expected in Danish culture.

“She’s Danish—she’s not a citizen, and she was very pregnant, and there was an element of figuring out “Well, where are we going to be?” And us wanting to be a family unit a bit more. Also, the Danes, they don’t really believe in marriage. I think it has a lot to do with the equality of the sexes over there. Marriage doesn’t mean anything financially, because the state takes care of people. So the marriage itself becomes less important,” he said. 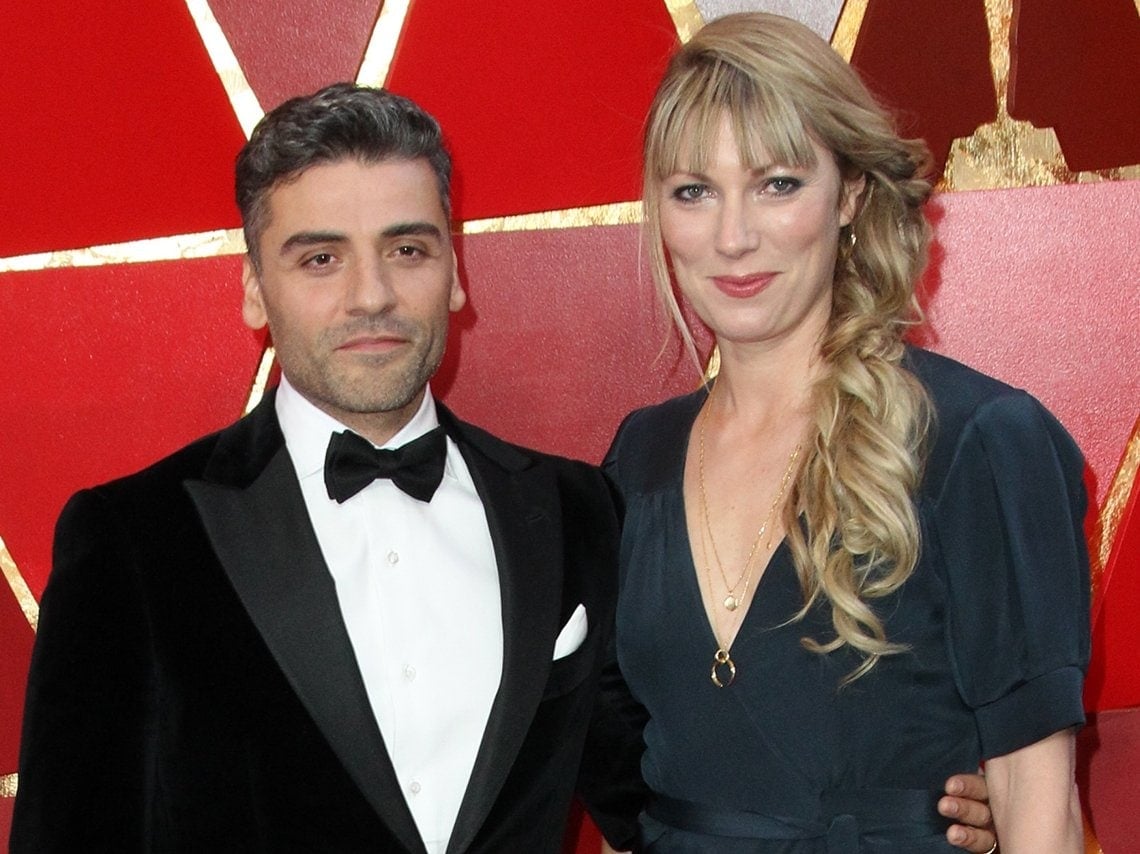 After seeing a very pregnant Lind carrying for his sick mother, Oscar Isaac realized that he wanted “to be with this person forever and ever.” His mother passed in February of 2017, they got married in March and welcomed the birth of their son in April.

Most recently, Oscar Isaac and Elvira Lind worked together on the Oscar-nominated short film, The Letter Room (2020). It is Elvira Lind’s first narrative short which she wrote and directed and stars Oscar Isaac as the lead character.

Who is Elvira Lind?

Though Elvira Lind is popular as Oscar Isaac’s wife, she is an accomplished actress, writer, director, and film producer in her own right. She was born in 1981 in Copenhagen, Denmark, and graduated from City Varsity School of Media Arts in Cape Town in 2006, having majored in documentary filmmaking.

This Danish documentarian is highly private about her personal life, keeping information and pictures about herself and her family very quiet. Almost nothing is known about her family, her siblings, or any prior relationships. 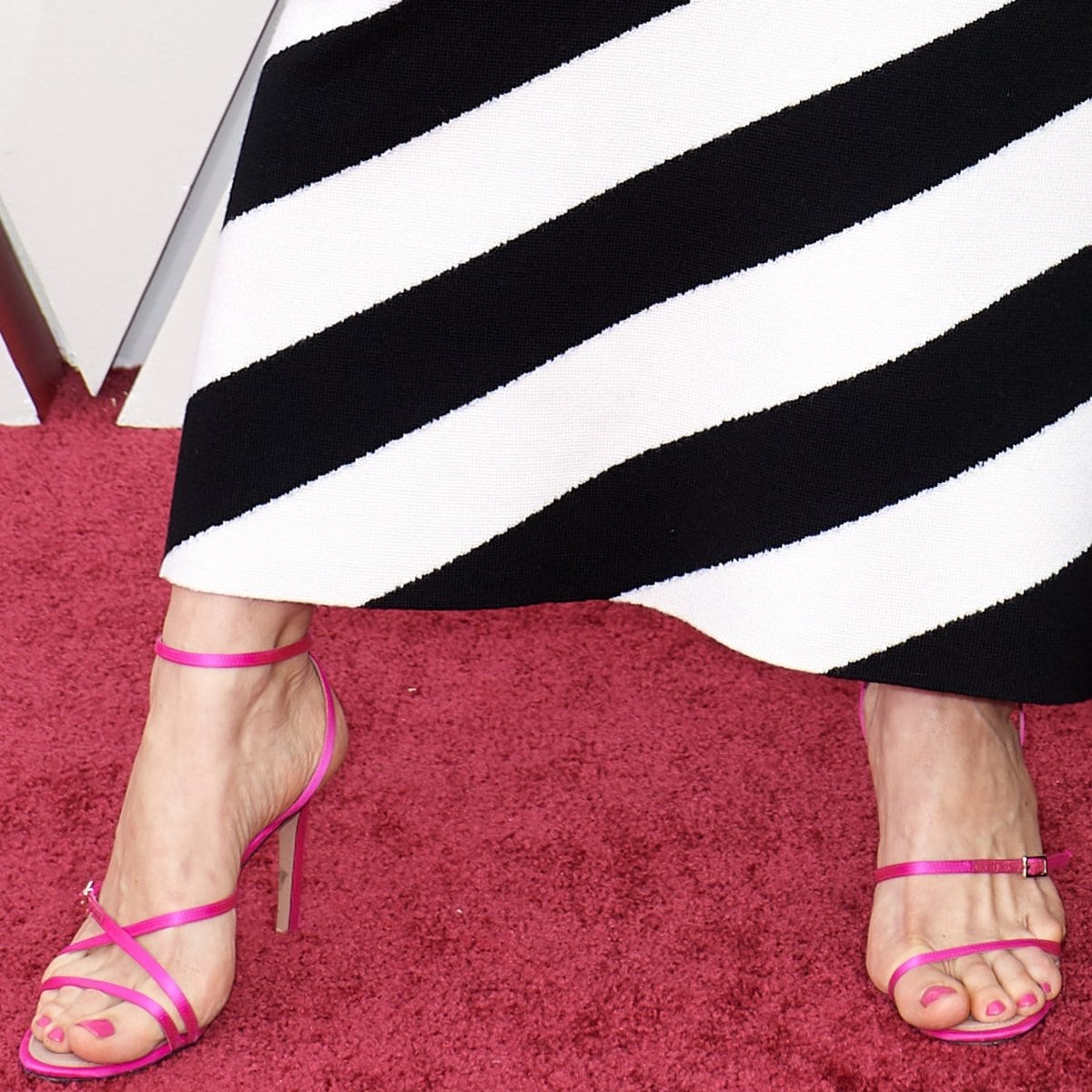 Isaac and Lind keep pictures and information close from the start of their relationship to the two children they share.

They only show the occasional snapshot of their children, always with their backs to the camera. Their first son, Eugene Isaac, was born in April 2017 and is named after his late mother’s middle name Eugenia.

They have not released the name of their youngest child, even though he is over a year old.

Oscar Isaac was born in Guatemala in 1979. His family moved to the United States when he was five months old, and they eventually settled in Miami, Florida. Oscar performed in punk and ska bands as a child and produced backyard plays with his sister, climate scientist Nicole Hernandez Hammer.

Not exactly a perfect child, he got expelled from his private grade school for setting off a fire extinguisher and defacing a mural with explicit words. Oscar was a class clown, and the teacher even attempted to screen his desk off from the rest of the class to keep him from being a distraction.

He began his entertainment career in music as the lead vocalist and guitarist in a punk band, Blinking Underdogs. The band opened for Green Day and The Mighty Mighty Bosstones. After moving to New York City, he auditioned for and was accepted into the acclaimed Julliard School in 2001 with a focus on drama. 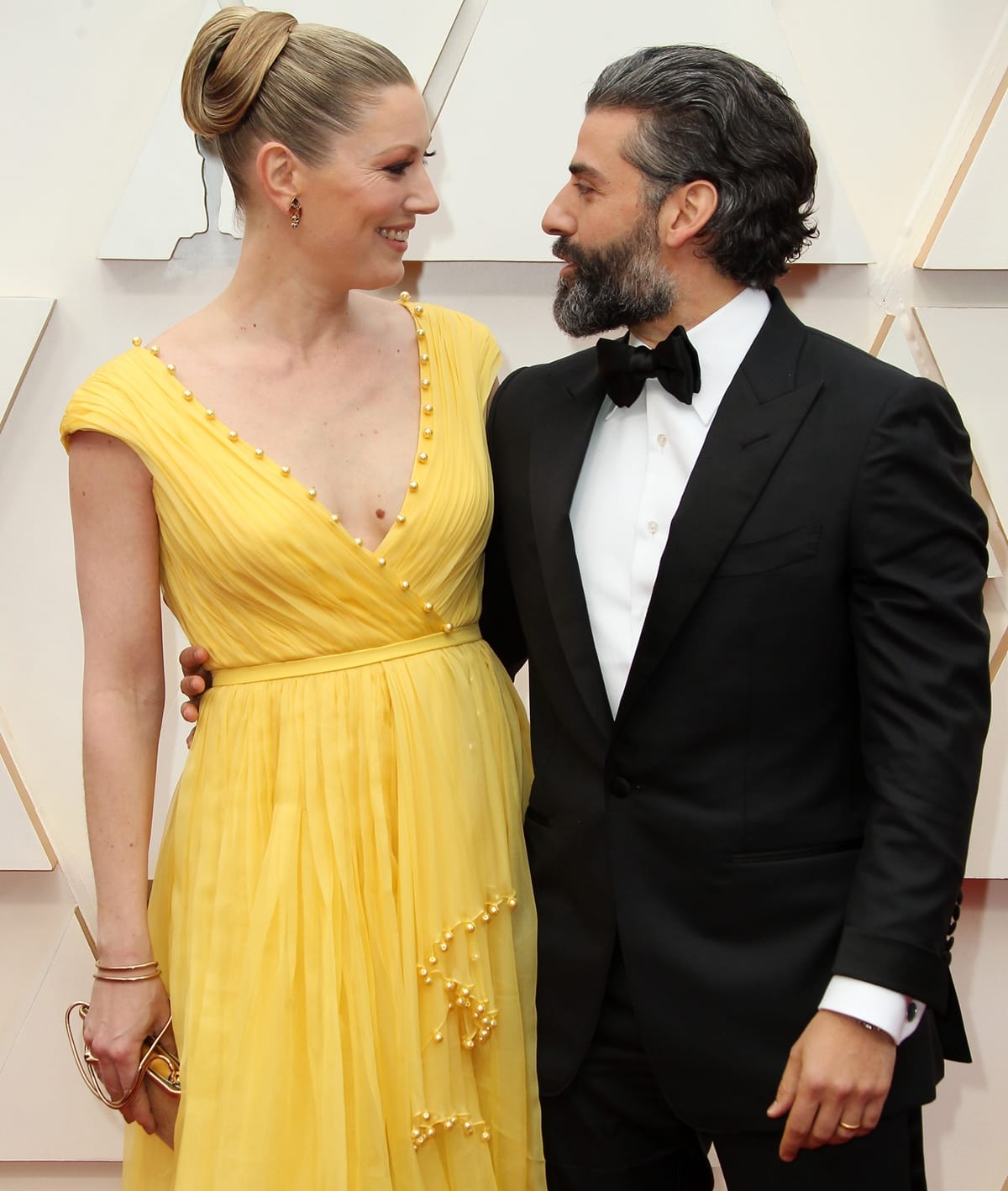 Before he graduated, he made his film debut in the action-comedy, All About the Benjamins (2002). Even though he chose acting over music, he still found ways to incorporate his musical talent into his acting career. In the movie 10 Years, Isaac performs the song “Never Had,” which Isaac wrote for his character to sing.

At Juilliard, he met Bobbe Jean Smith, which eventually led to their production of Bobbe’s art that Elvira Lind would be recording as a spectator. Though his acting made him famous, it was his music that got him the girl.

While in school, he dropped his Latin surname, Hernandez, and went by his middle name, Isaac, hoping that it would help him expand the roles he was being offered. Even though he felt that the name change was beneficial, he was passed on a role because the director wanted a Cuban or Latin actor to play the role.

He has spent his career attempting and succeeding in breaking stereotypical molds for Latino characters in film, molding them into full-rounded characters instead of cliches. He has since acted in over 30 feature films and has received two Golden Globe Awards for his various performances in features films and TV series.

Oscar Isaac was engaged to his childhood sweetheart Maria Miranda in 2007. Much like his now-wife, Elvira Lind, Oscar Isaac has kept his private life secretive and out of the spotlight.

Up until 2015, there was speculation that Oscar Isaac and Maria Miranda were engaged or even married. But in interviews in 2015, Oscar Isaac refers to his significant other as a girlfriend, putting to bed those rumors of rings and matrimony.

The entertainment world was shocked when the “Internet’s Boyfriend” was suddenly attached to Elvira Lind and even more so when they announced their marriage and pregnancy in 2017. 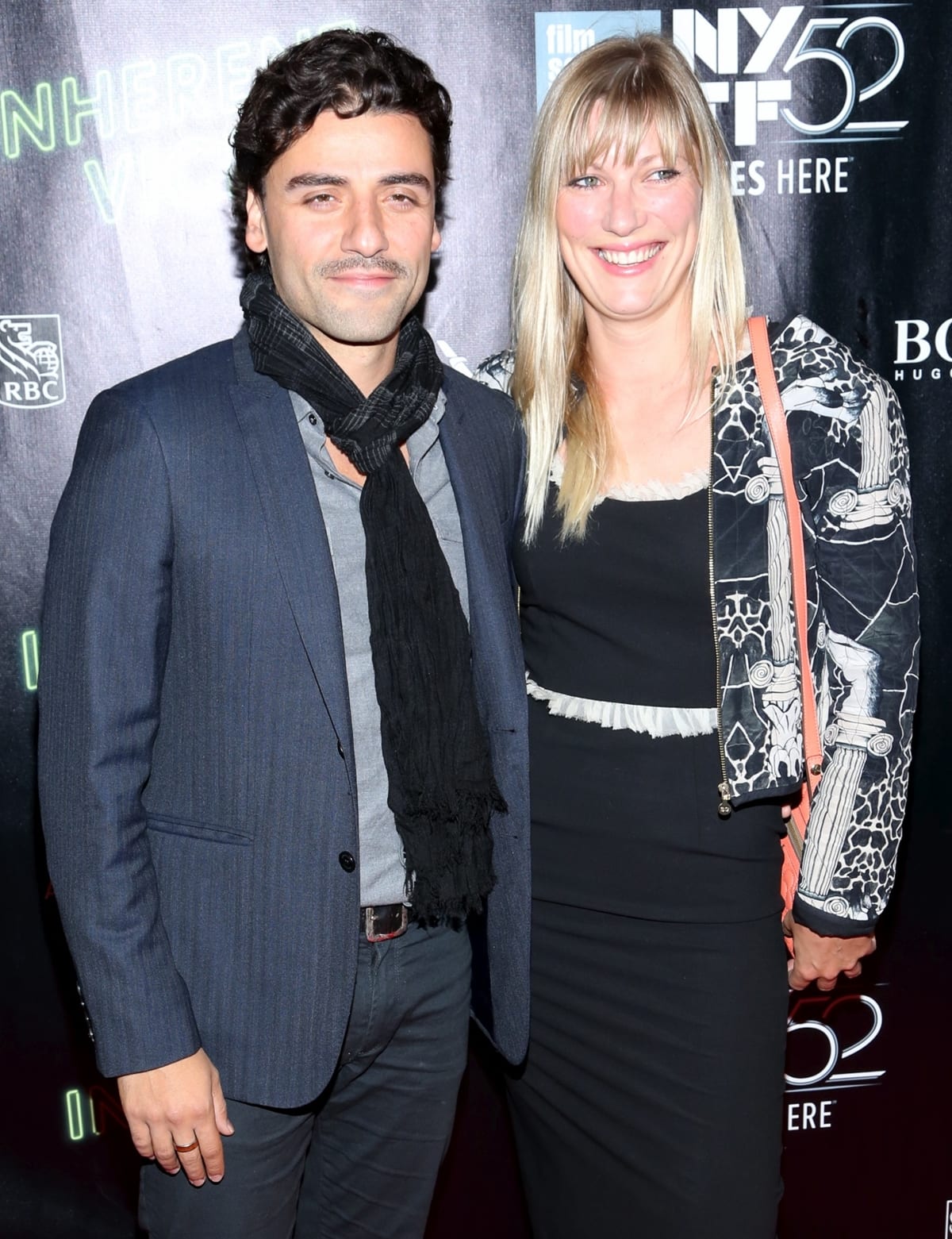 There has been speculation that pictures of Oscar Lind and Miranda might possibly have been of Elvira Lind all along as the two were confused up until 2016.

As there are not many pictures of Maria Miranda, it is a hard rumor to put to bed. There are even rumors that Elvira is Maria Miranda.

Elvira Lind has no known relationship history, which is not surprising given that her personal life is notoriously private.

Measuring in at 5’ 7”, actor Oscar Isaac is a little shorter than his Danish wife, who measures in at 5’ 9”. 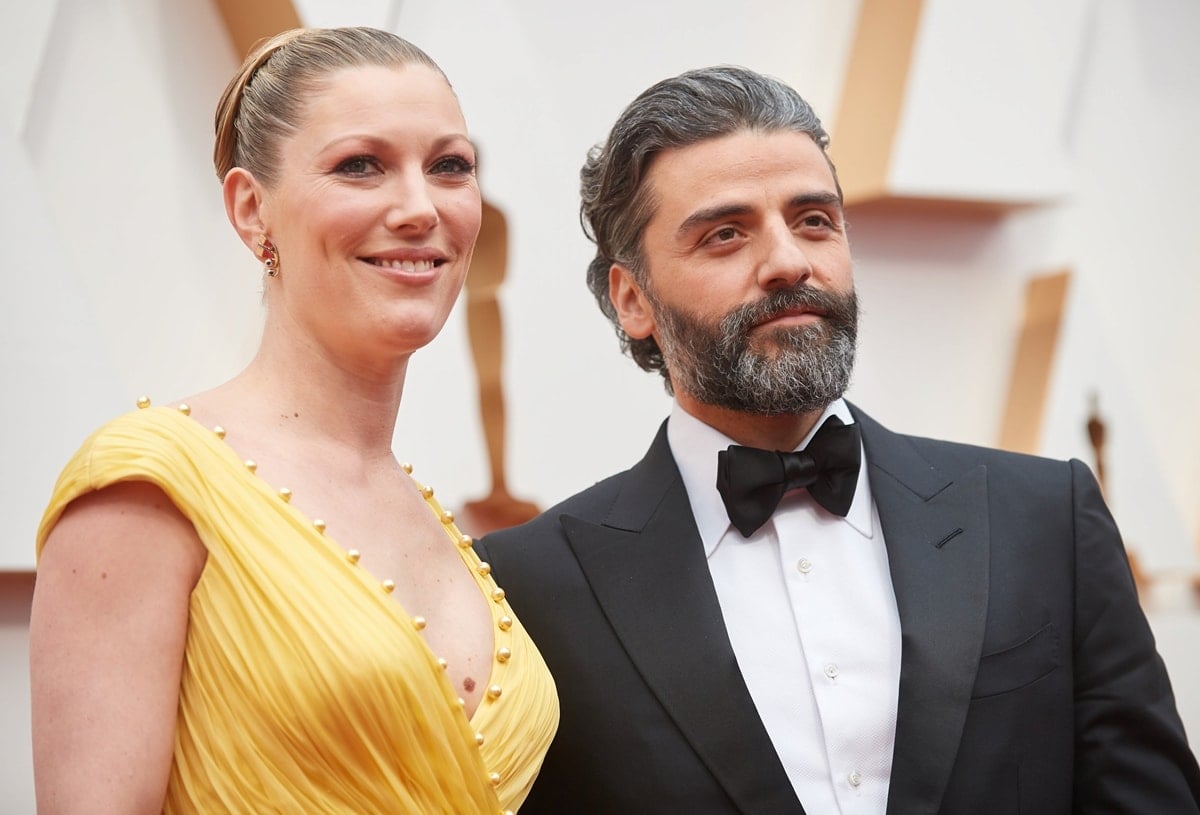 Their height difference is significant enough to garner attention, especially in the public eye, where pictures and tall shoes can make it seem there is a much more substantial difference between their heights.

More than that, the “Internet’s Boyfriend” was sporting a black beanie, red sweater, a mustache, a 5-o’clock shadow, with a counter littered with cold medicine. Isaac’s breakdown of the photo was quite simple, which he told Jimmy Kimmel on the “Jimmy Kimmel Live!”

He explained how he had a bad cold, hence the medicine, and the mustache was for a role in an HBO series, Show Me a Hero (2015).
Why chopsticks? “I’m a sophisticated gentleman, so I didn’t want to get the powder on my fingers,” Isaac said. “So I went for the chopsticks.”

Before Oscar Isaac and Elvira Lind were a couple, there was Pedro Pascal and their close friendship. They met in the off-Broadway production Beauty of the Father in 2005. The duo were fast friends with their shared dreams and shared frustrations of the entertainment industry.

Both shared a common frustration of feeling pigeonholed by consistently being cast as Latin characters. With Isaac being a Guatemalan-American and Pedro Pascal being a Chilean-American, they both felt that their Latino heritage drove Latino-based stereotypical roles that cast them as thugs, gangsters, or roles that directors felt only Latin-Americans could play.

But their dreams of being actors are what drove their lifelong friendship. Though the play Beauty of the Father only lasted for a month, their friendship lasted till now.

The two friends rang in the 2021 new year together, with Lind taking some now-viral shots of Pascal and Isaac drinking and laughing. There is even a picture of Pascal and Lind on Pascal’s Instagram page.

The close friends did eventually work together again in the Netflix movie Triple Frontier. Oscar Isaac’s character puts the gang back together and focuses on the friendships of these men on their mission.

It is a fitting story for two friends who have spent the last fifteen years working in the same industry and cheering each other on. Joining her co-stars Oscar Isaac and James McAvoy on the red carpet, in March 2016 Jennifer Lawrence showed off her cleavage in a gorgeous dress on the carpet at the ‘X-Men: Apocalypse’ fan screening event at the BFI IMAX in London, England. She reprised her role as the blue-tinged mutant Mystique in the superhero franchise. The then 25-year-old Oscar-winning actress donned a pale silver satin floor-length dress from Christian Dior featuring a keyhole neckline, cut-out side panels, and a sexy open back with a criss-cross design. She styled the Marilyn Monroe-esque gown with Pomellato jewelry and a pair of ‘Pearl’ sandals by Jimmy Choo. 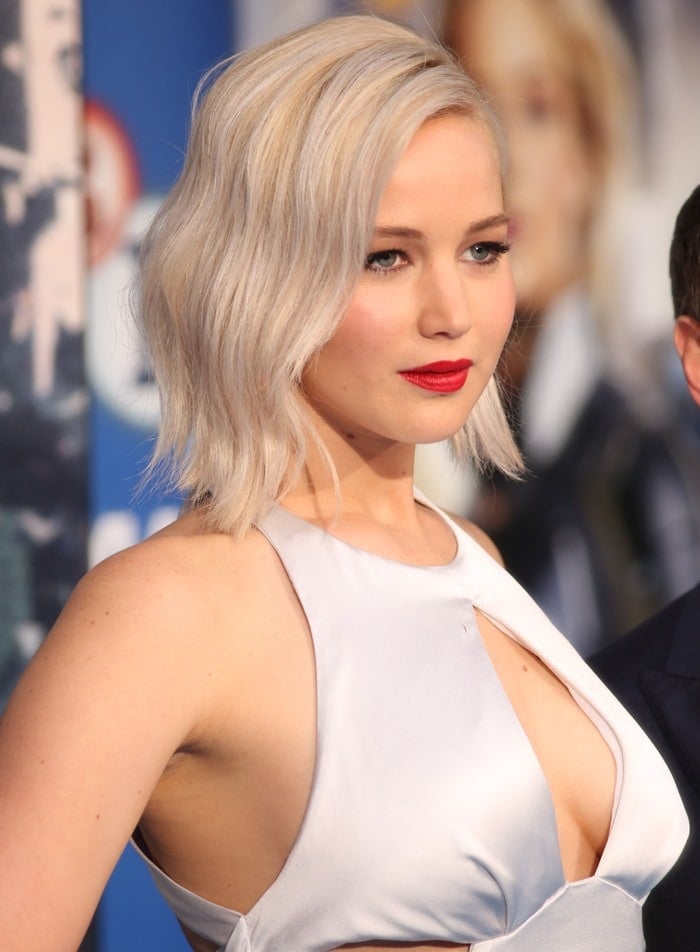 Earlier this year, we spotted Jada Pinkett Smith in a custom-dyed version of the same open-toe platform sandals. They are unfortunately not available for sale. You can find the latest shoe releases from the designer at Farfetch.

How do you like Jennifer Lawrence’s silver Christian Dior Couture halter gown and her matching platform sandals? 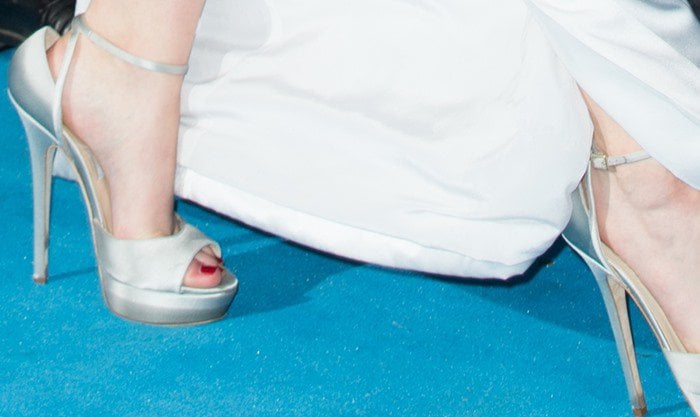 This Ankle Boot Trend Is Over

What Are Shoes Made Of?