It has been a busy week for Gigi Hadid! After walking several runway shows for New York Fashion Week, the 26-year-old supermodel made a solo appearance with a red retro-inspired ponytail at the Met Gala on Monday. 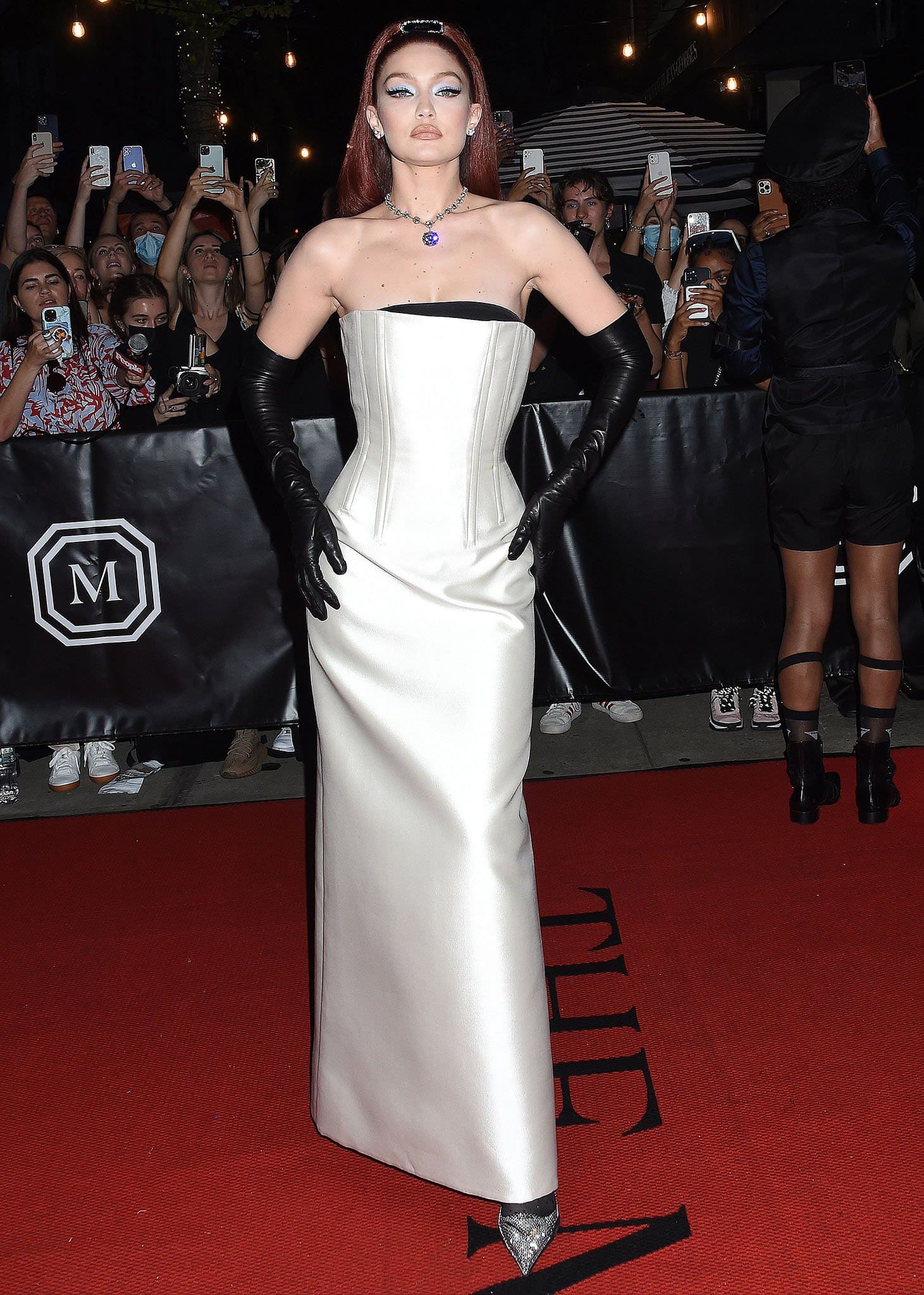 Opting for ‘60s-inspired glamour, Gigi looked regal in a simple black-and-white column gown that clung perfectly to her hourglass figure.

A glamorous nod to American fashion, the custom Prada gown features a sleek column silhouette with a strapless corseted bodice and a dramatic thigh-high slit in the back.

Underneath the classy gown, Gigi wore a black bodice, which matched her semi-sheer black tights and black leather opera gloves.

Speaking with Vogue, Gigi described her outfit as “an ode to simple, well-made fashion.” 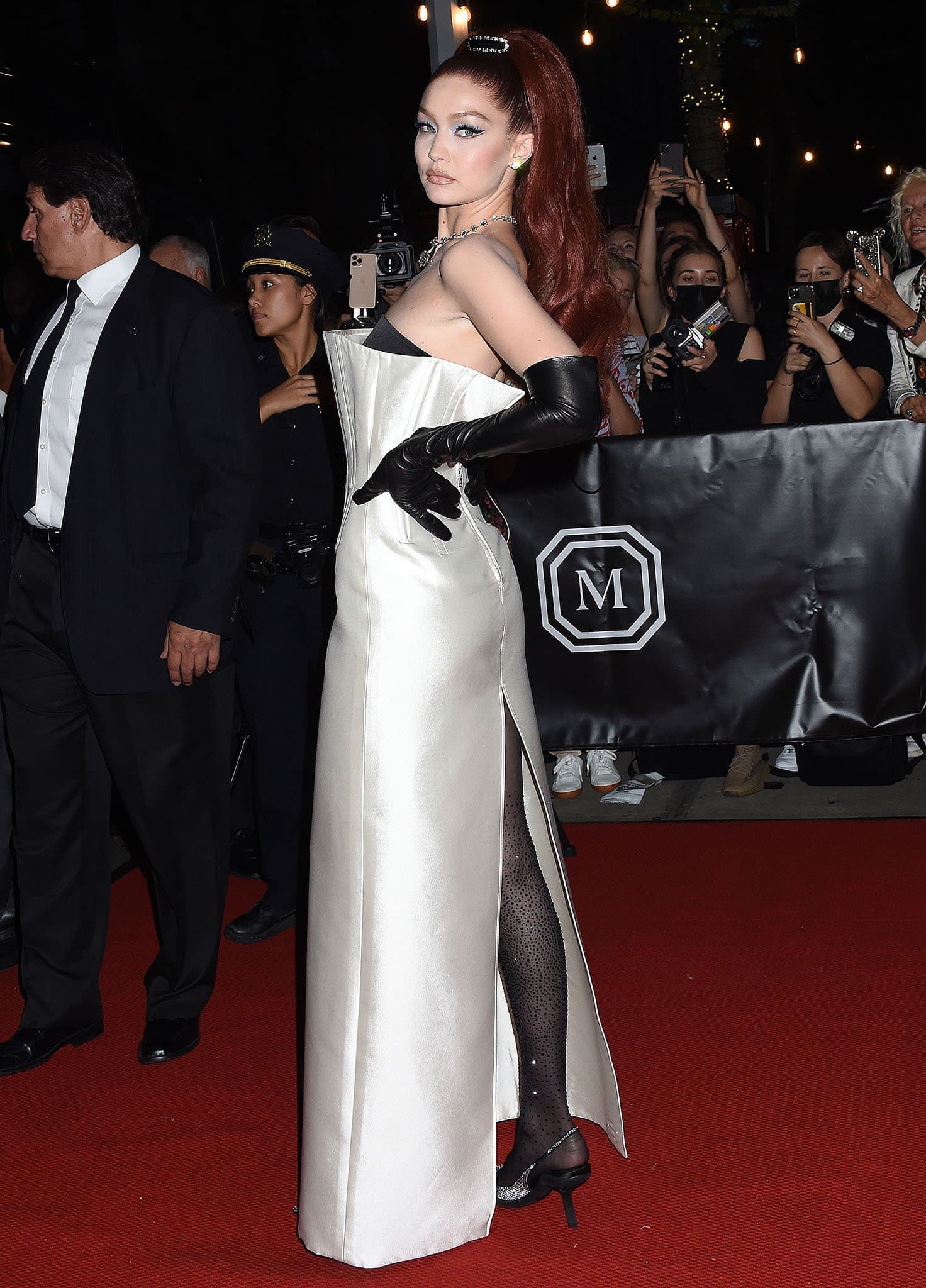 With her red hair high up in a retro-inspired ponytail, Gigi Hadid shows off her curves in a custom Prada column gown (Credit: Mega / WENN)

The mom-of-one debuted a fiery red hair color, done by colorist Keith Shore. Hairstylist Esther Langham then pulled her tresses up into a retro high ponytail with detachable extensions cascading down her back in glamorous waves. 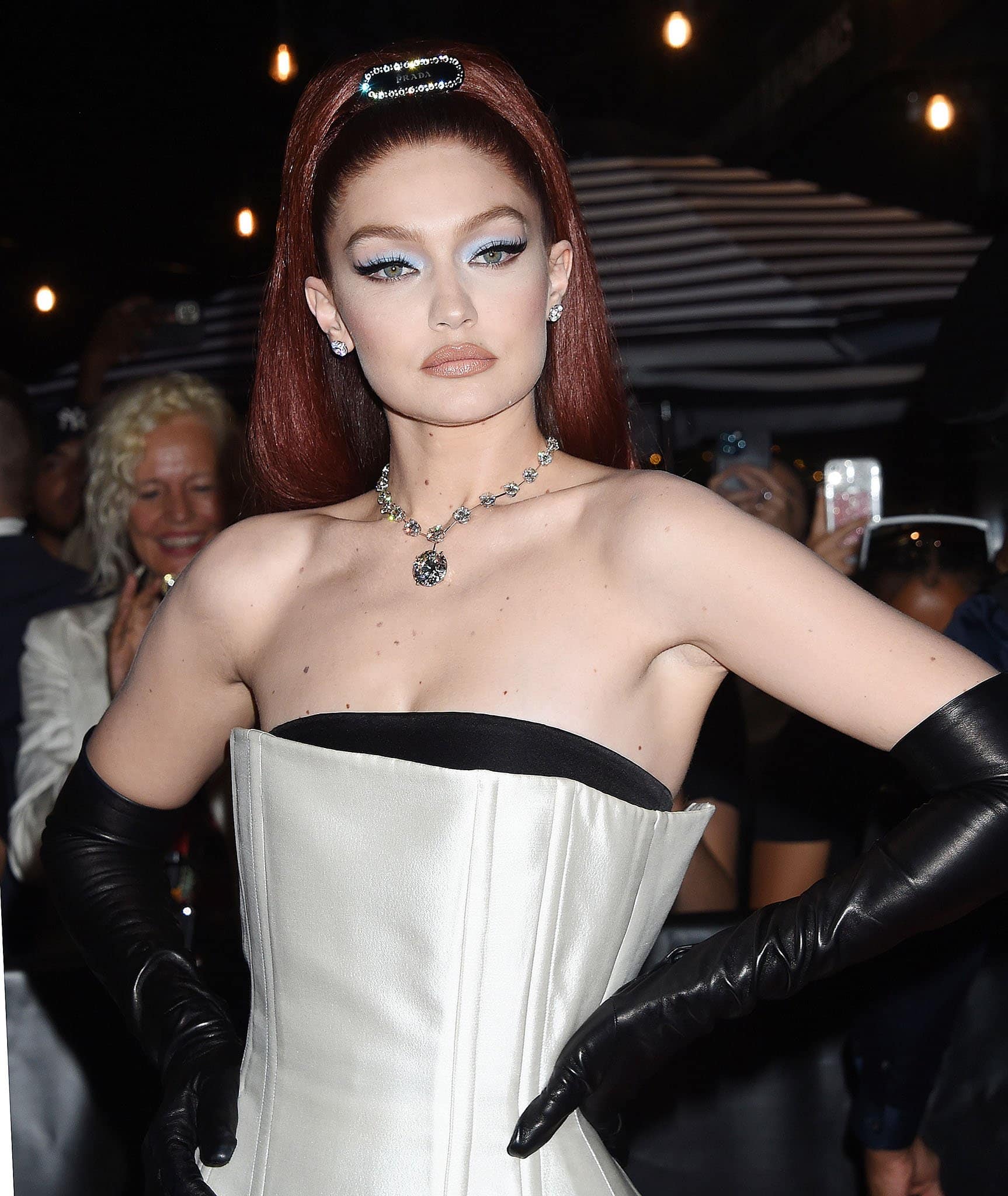 In a quick interview with Met Gala livestream co-host Keke Palmer, Gigi revealed that she wanted her Met Gala appearance to inspire her daughter.

“She’s one next week, and I feel like I’ve been on mama duty. I’ve been at the farm with her every day in my sweatpants and our matching messy buns. I feel like tonight I’m showing her what it means to dress up and own it and have balance. I think finding that in your life is when you really feel like you’ve stepped into womanhood.”

Styled by Mimi Cuttrell, Gigi dazzled with a showstopping Riviera diamond necklace and a large pair of diamond stud earrings, both from Jacob & Co. She also accented her ponytail with a crystal-embellished black barrette from Prada. 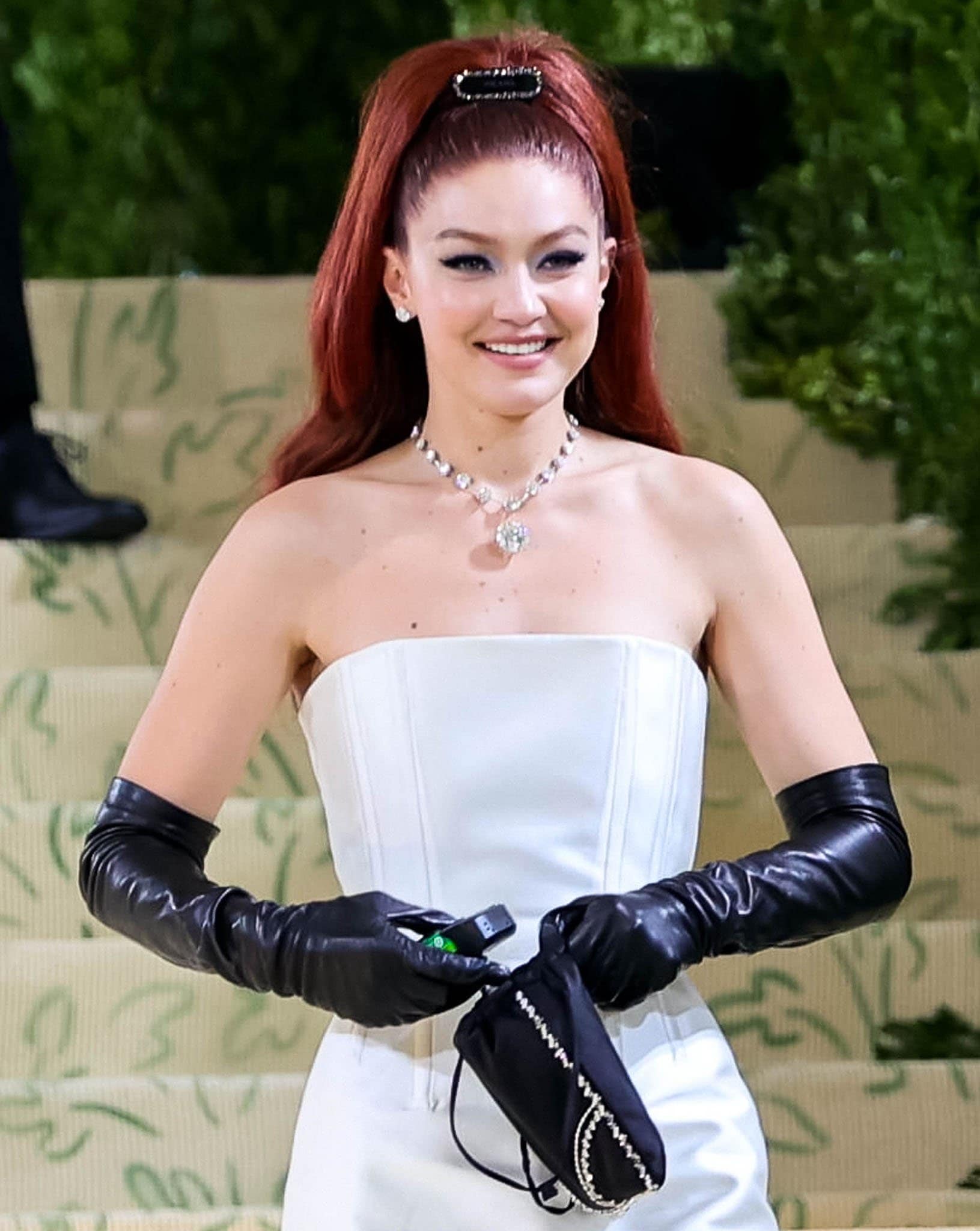 They are embellished with sparkling crystals from the pointed toes to the slingback straps and have a crystal-embellished logo detail at the vamps and about 3-inch comma heels. 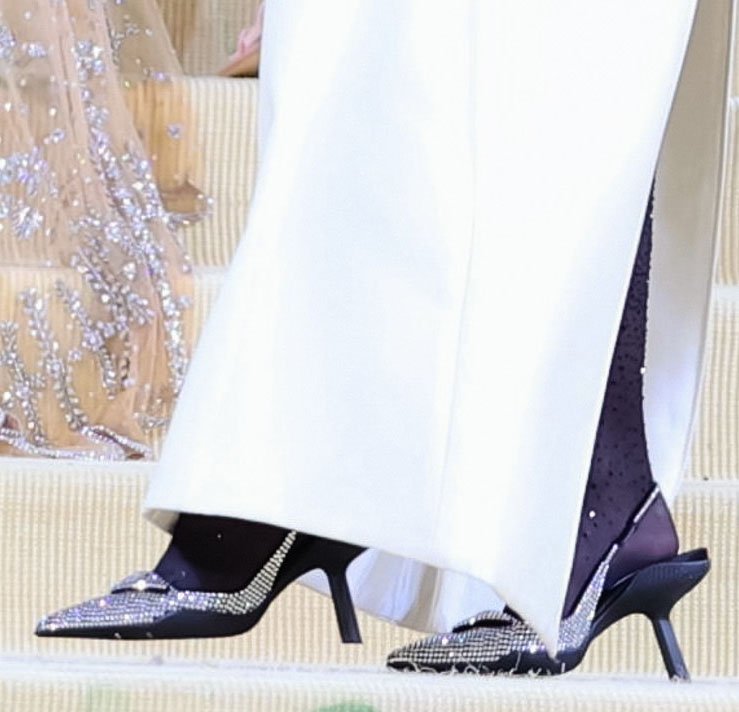 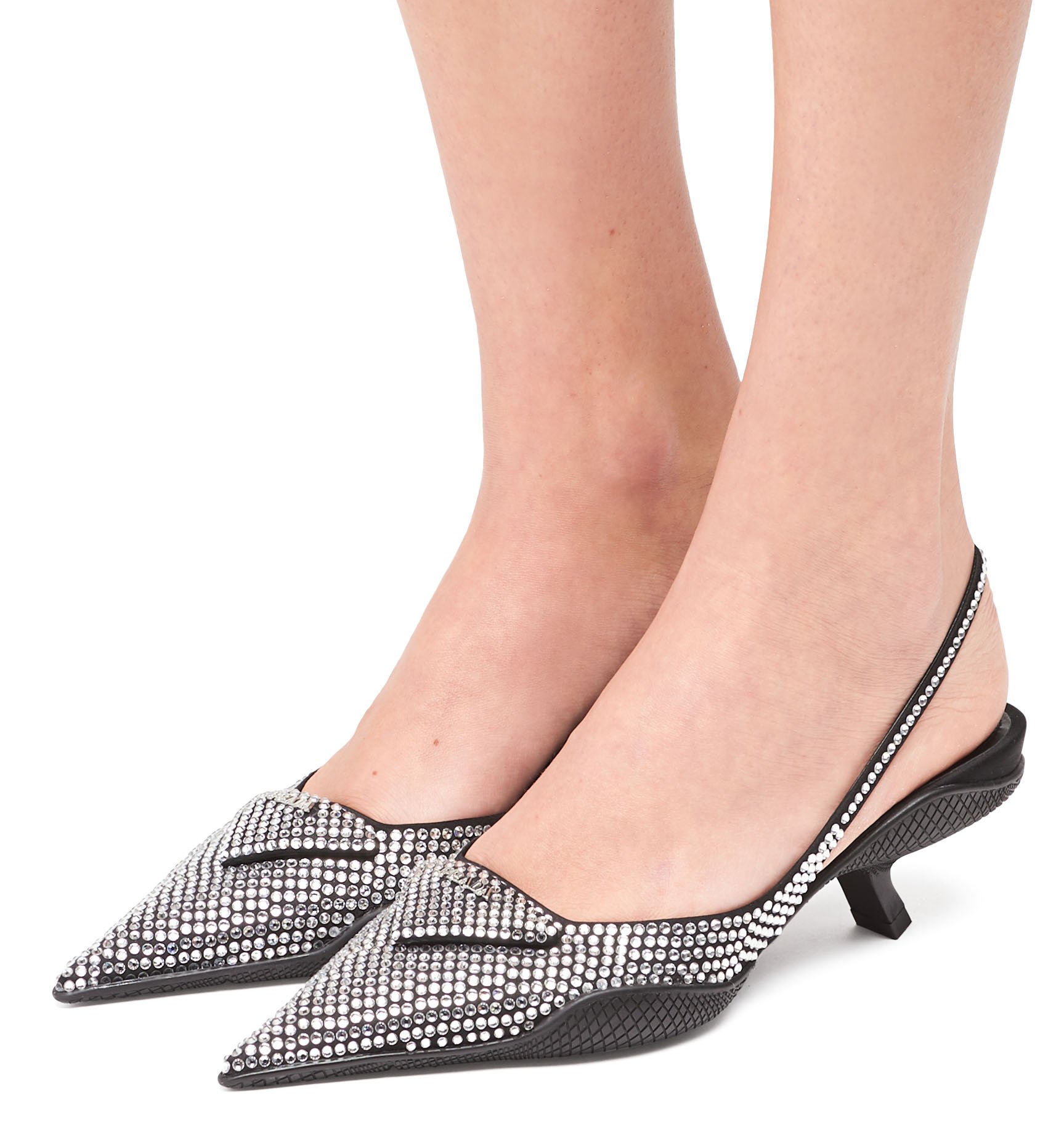 Last Friday, she was spotted outside Tavern On The Green after walking for Michael Kors’ fashion show. She went the casual route, wearing a $125 black “Shorty” crop polo shirt from Bleu Salt with gray-colored wide-leg The Row jeans. 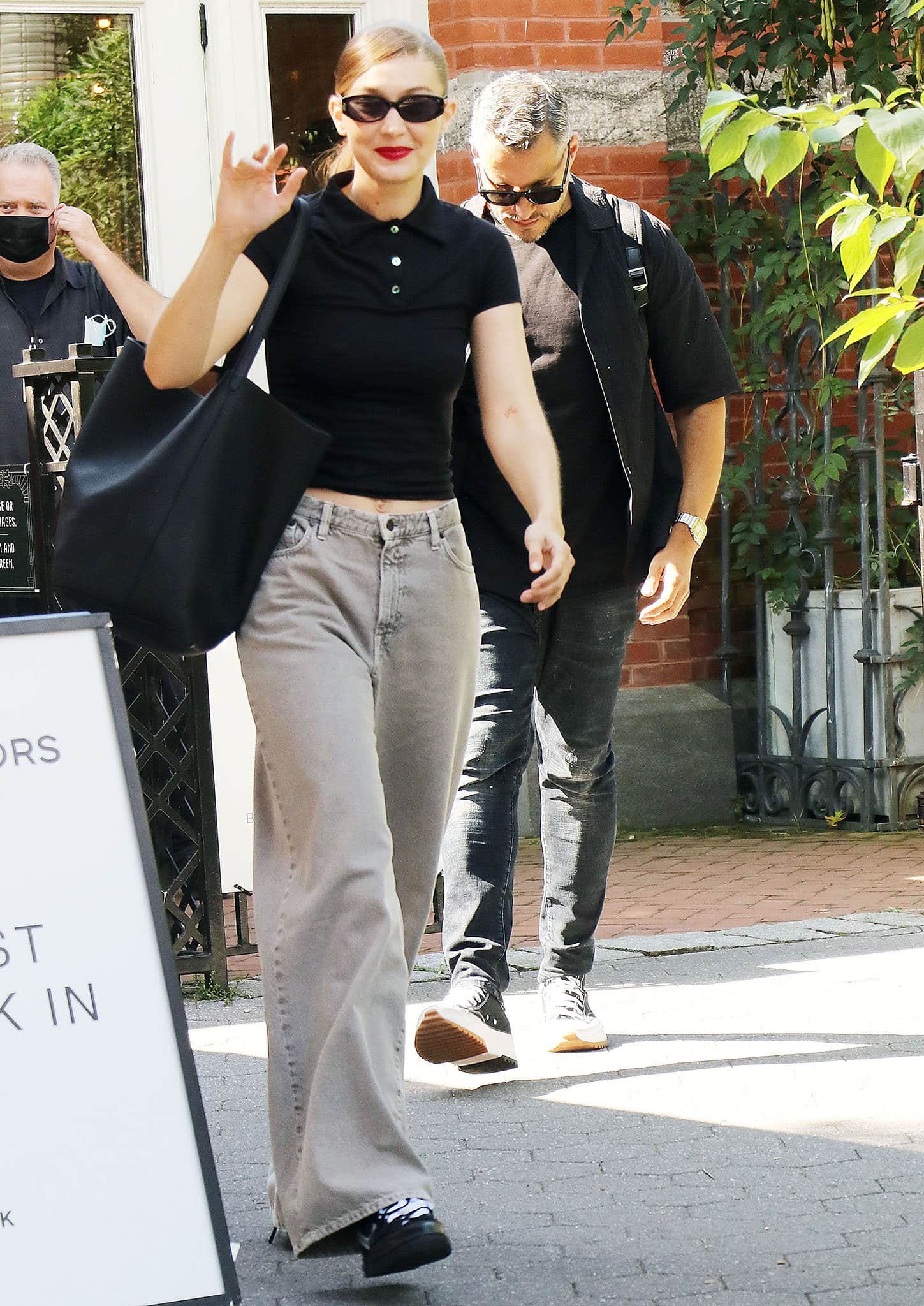 Shielding her eyes behind a pair of black sunglasses, Gigi wore her hair in a sleek side-parted ponytail and added a pop of bold red lip color to her look.

She then carried her essentials in The Row N/S Park black leather tote, which you can get for $2,750 at Net-A-Porter. 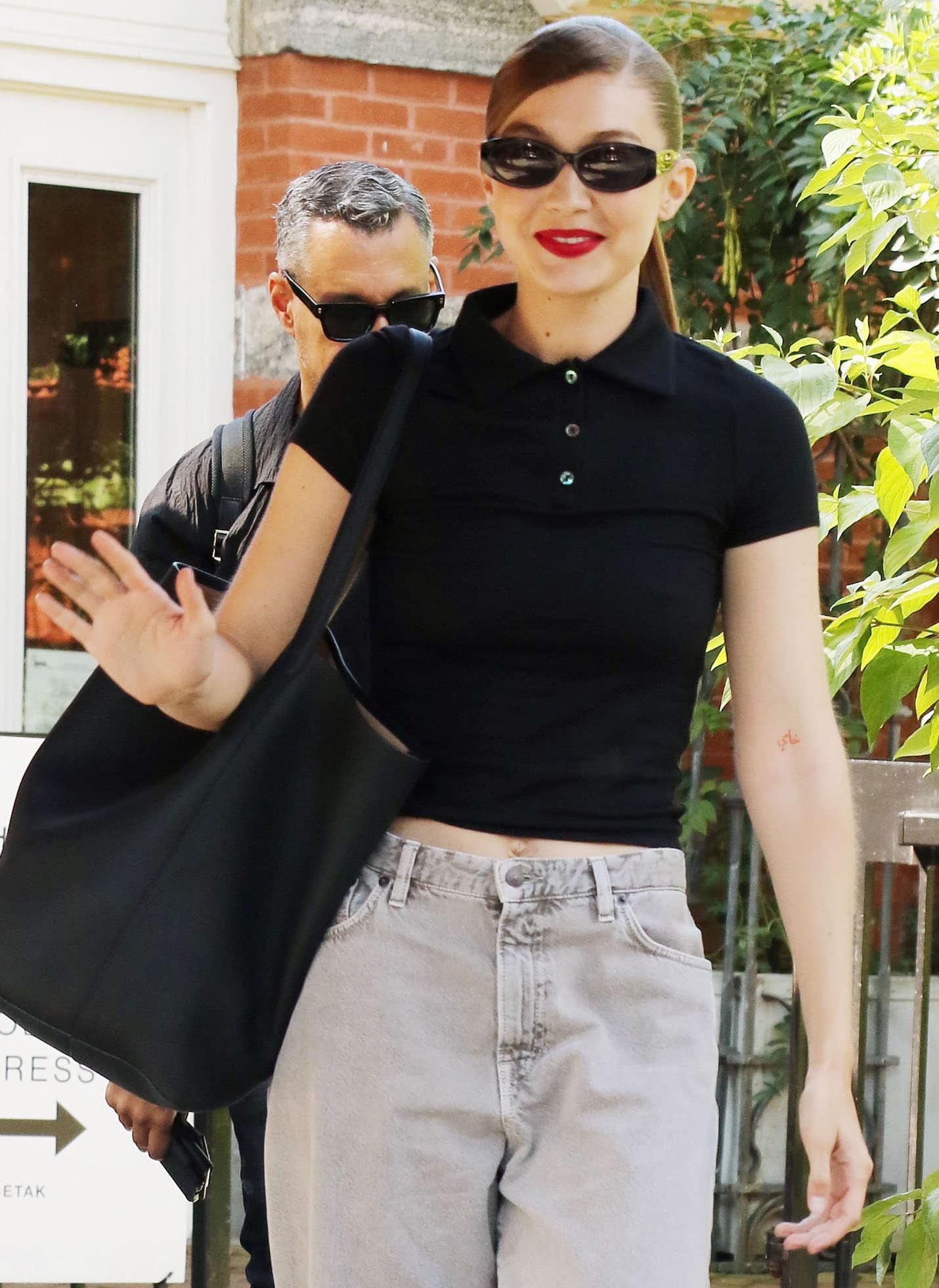 Keeping things comfy, Gigi teamed her outfit with the Dunk Low sneakers from Nike and Off-White.

Virgil Abloh and Nike teamed up for a new iteration of the Dunk Low shoes, constructed from black leather with metallic silver Swoosh and purple accents. They also have a rope lacing system finished with rubber outsoles. 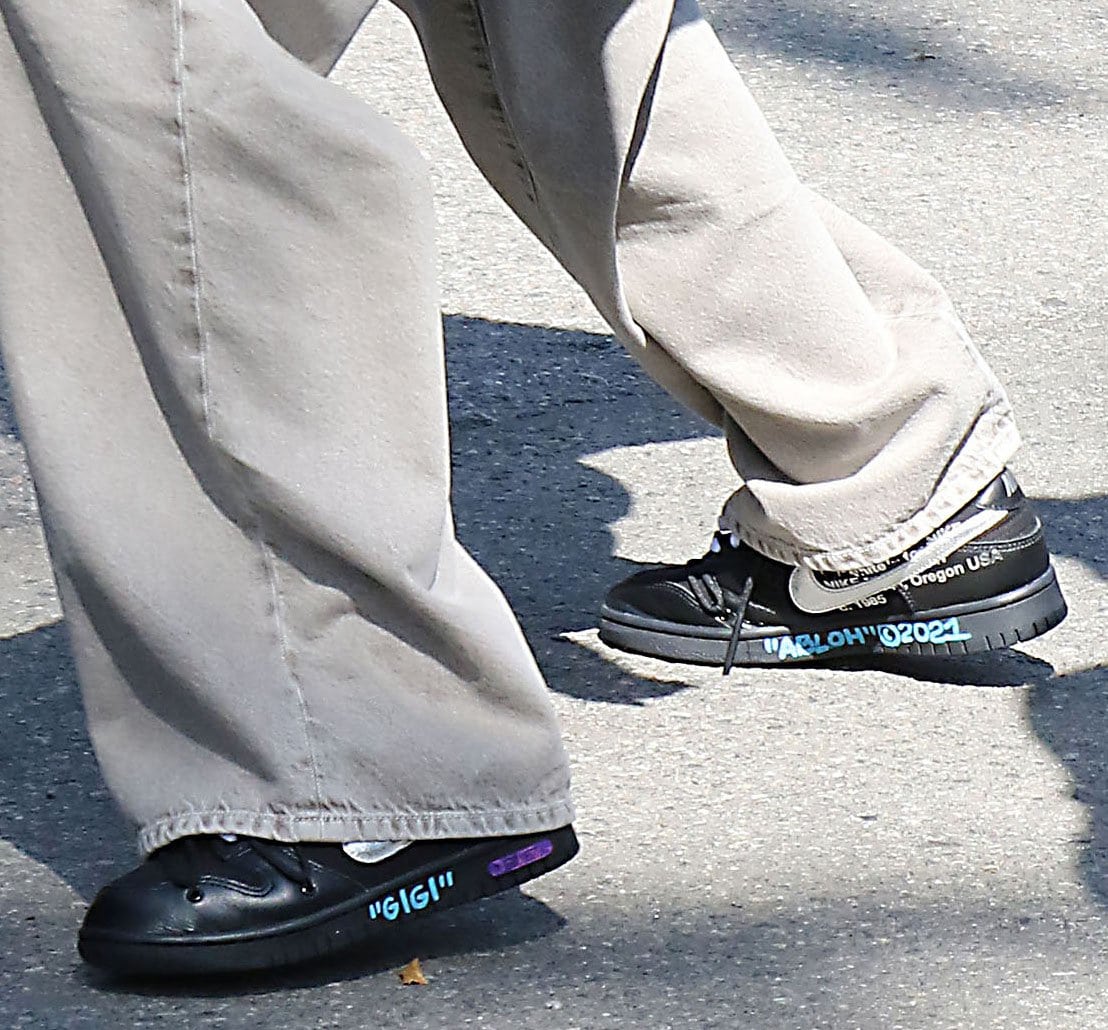 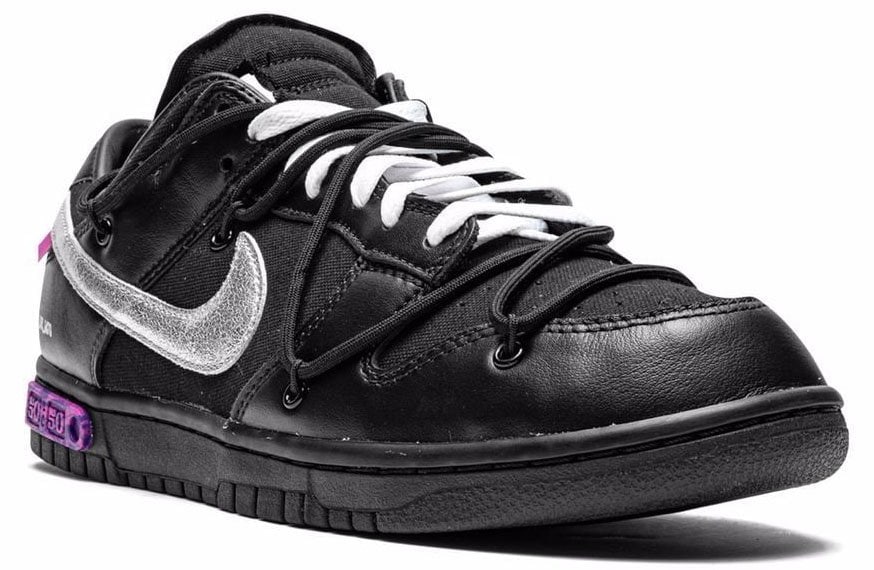 Later that day, Gigi was pictured showcasing her incredible figure in a bikini top with a matching satin blazer and pants for Brandon Maxwell’s runway show.

She let her long tresses fall loose around her back and wore minimal makeup. A pair of silver heels with sculptural heels completed her runway look. 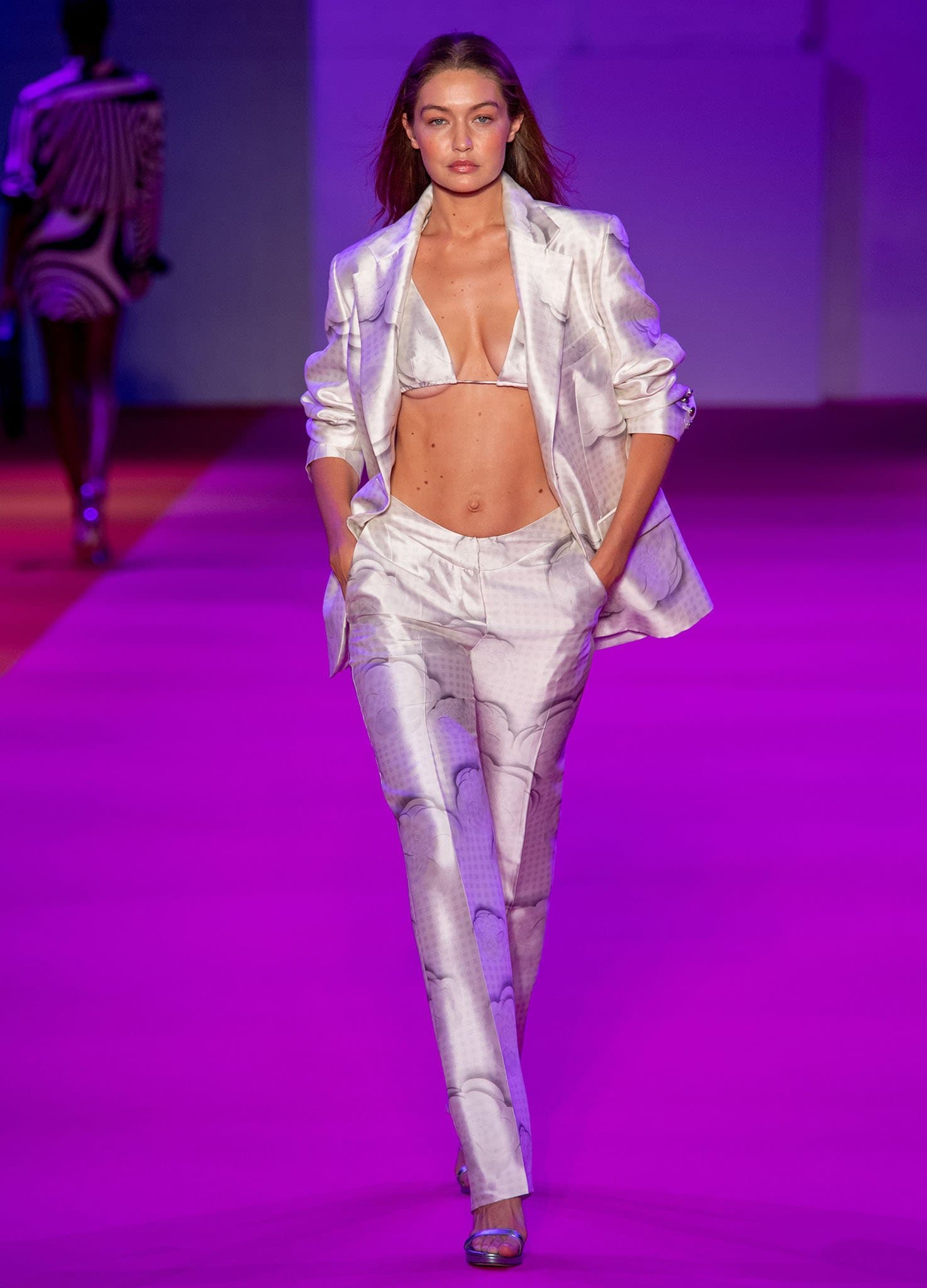 A day before, Gigi attended the Daily Front Row’s eighth annual Fashion Media Awards at the Rainbow Room, where she presented the Fashion Legend award to Carine Roitfeld.

Gigi oozed dark glamour in head-to-toe Givenchy. She went braless underneath a $4,595 black leather jacket with graphic cutouts and a plunging neckline that offered a glimpse of cleavage and paired the look with a $1,630 pleated, asymmetrical skirt with a bandana print. 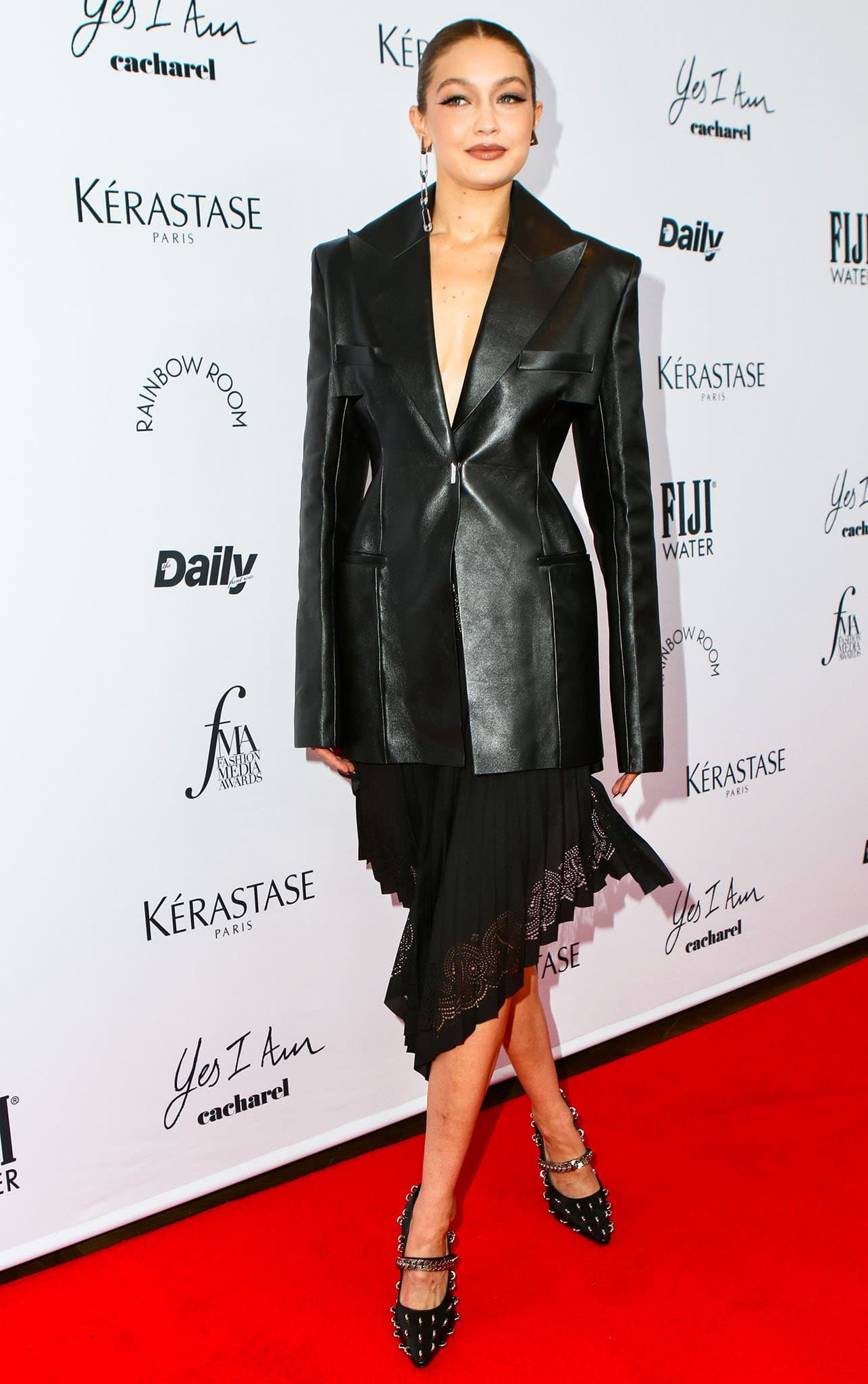 She then slicked her tresses back into a braided ponytail and highlighted her features with winged eyeliner and mauve lip color. 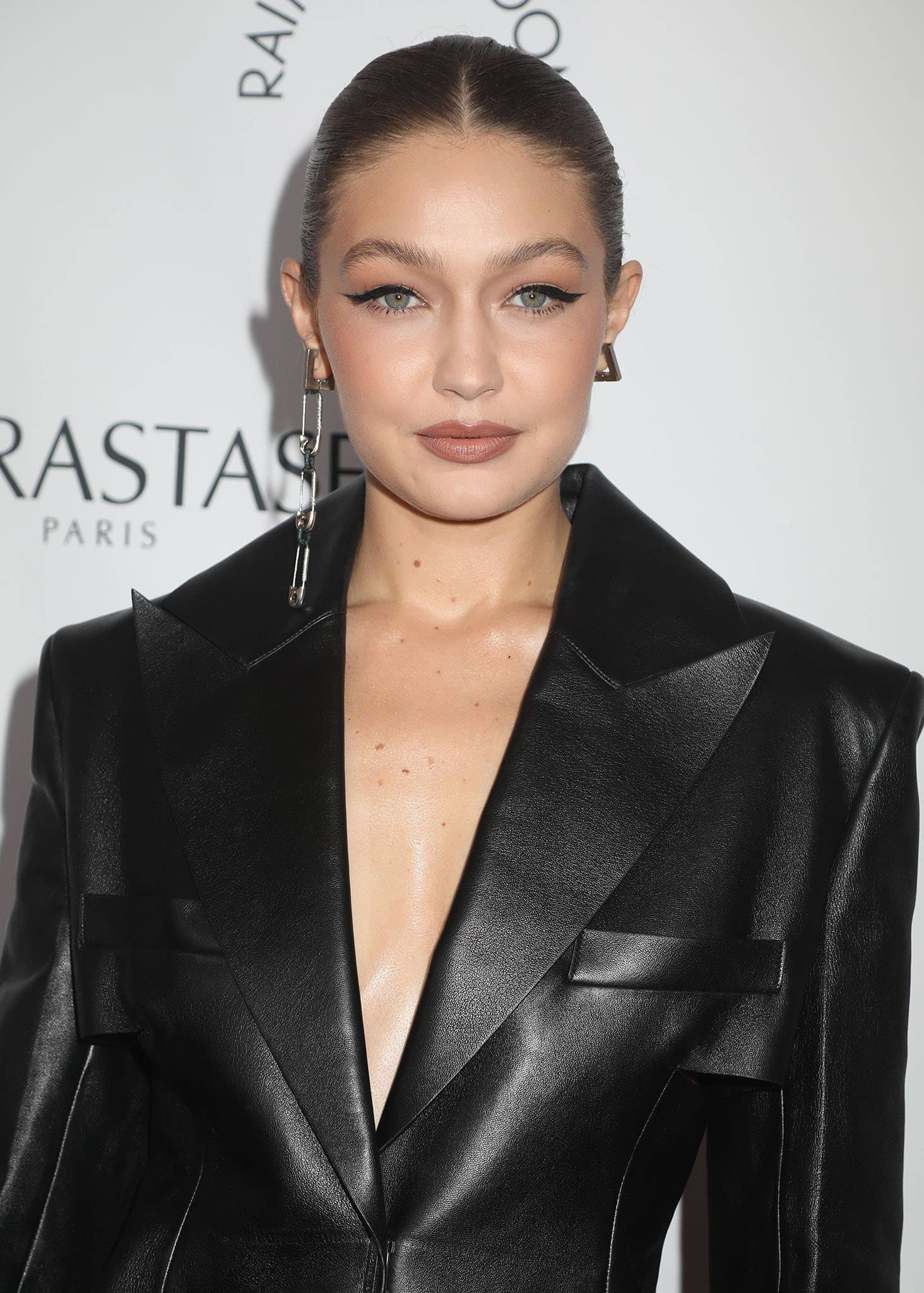 To complete her sexy yet edgy look, Gigi slipped her feet into a pair of Givenchy pumps with studded rings all over.

These pumps are crafted in Italy from smooth lambskin leather and feature a pointed-toe silhouette with silver chain straps, silver hoop embellishments, and 4-inch heels. 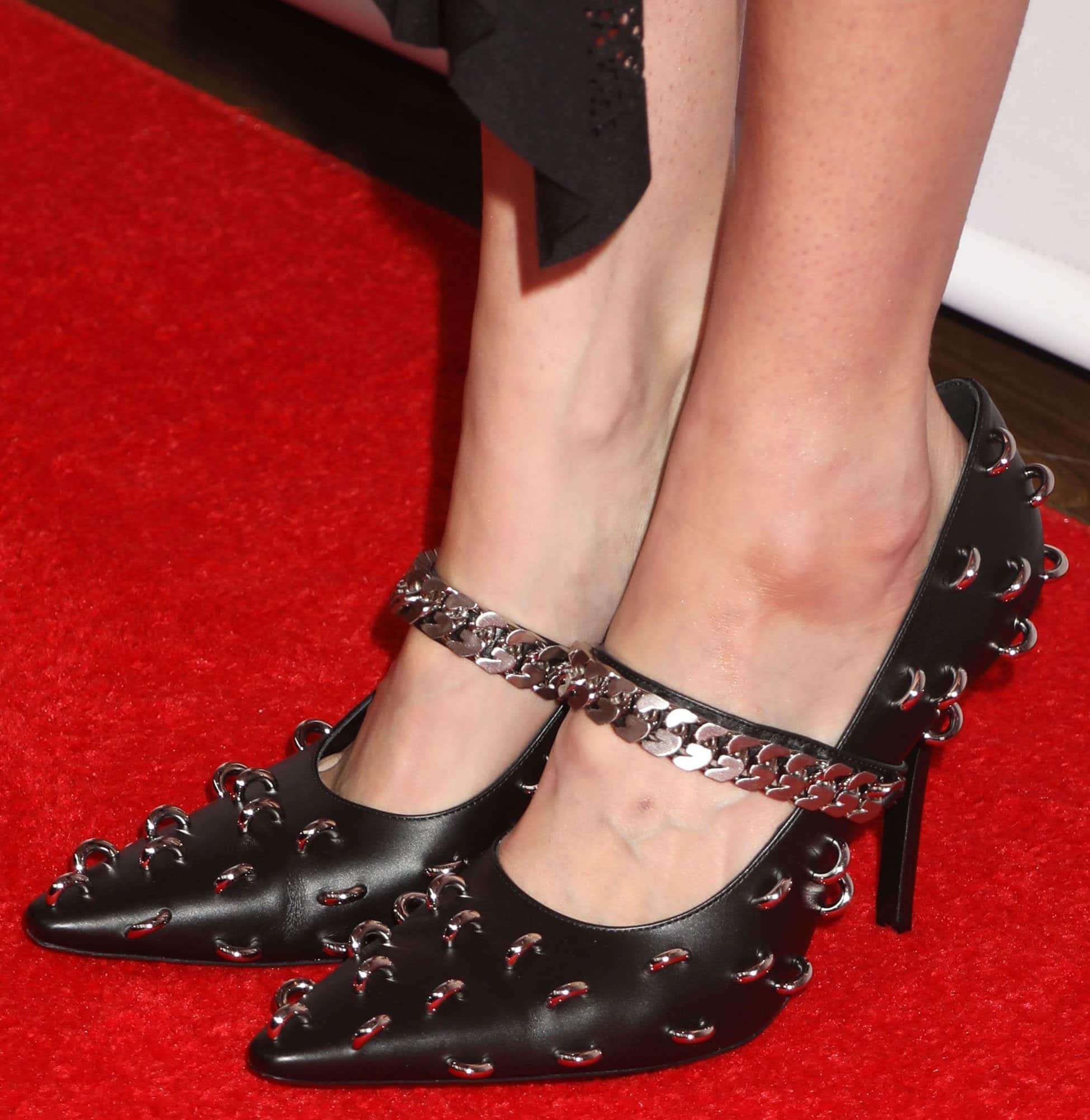 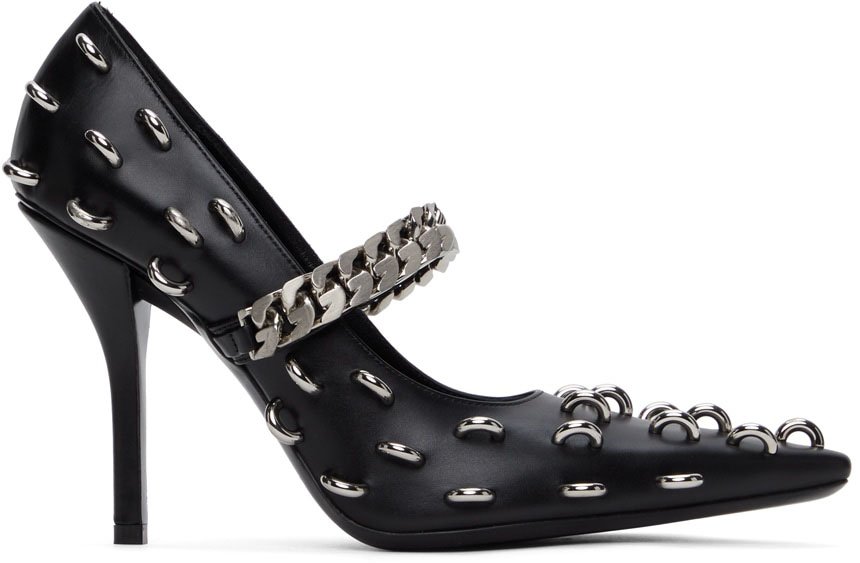 Gigi walked the runway with a baby bottle clutch in one hand. She then styled the already colorful look with blue drop earrings and a pair of glittery yellow platform heels. 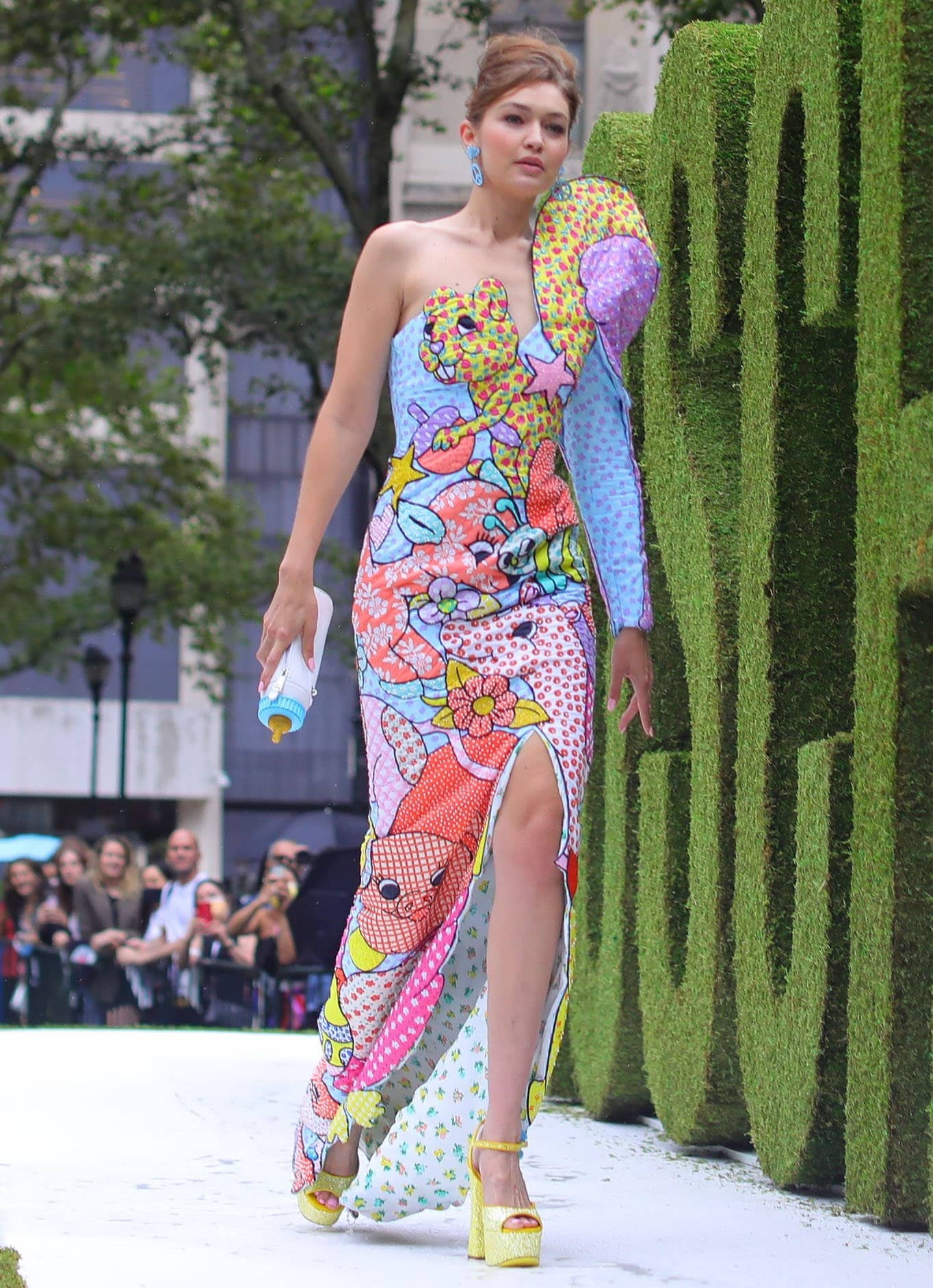 Never one to shy away from flaunting her curves, Gigi slipped her slim figure into a skintight brown dress from KNWLS. The corseted strapless frock features hip-high side slits that are held together by metal detailing. 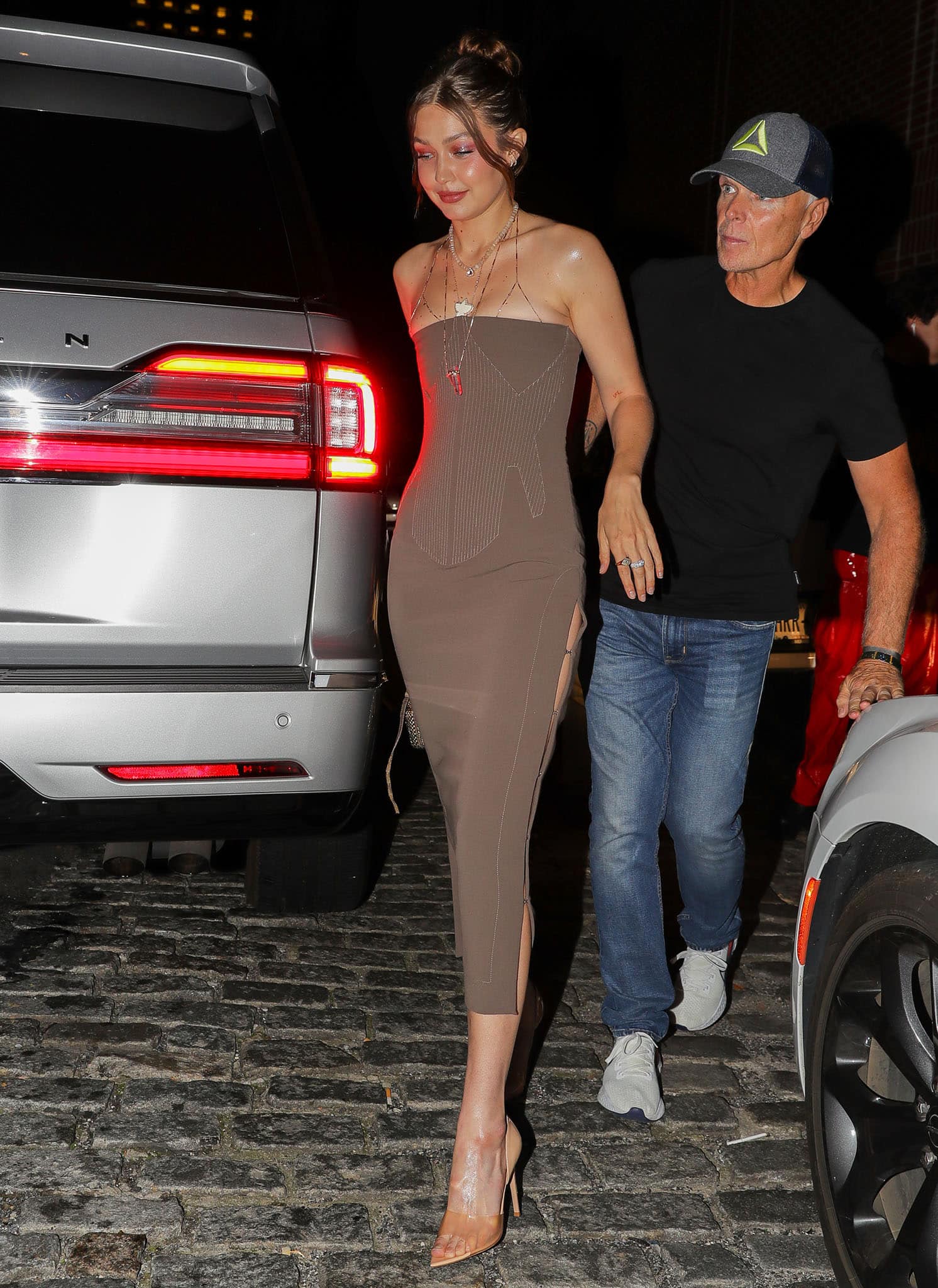 Adding a hint of sparkle to her rather plain outfit, Gigi accessorized with multiple tiny hoop earrings and layered several necklaces around her neck.

Gigi glammed up for the evening with red smokey eye-makeup and matching blush and lipstick. She then coiffed her tresses up into a chic bun with several tendrils framing her beautifully made-up face. 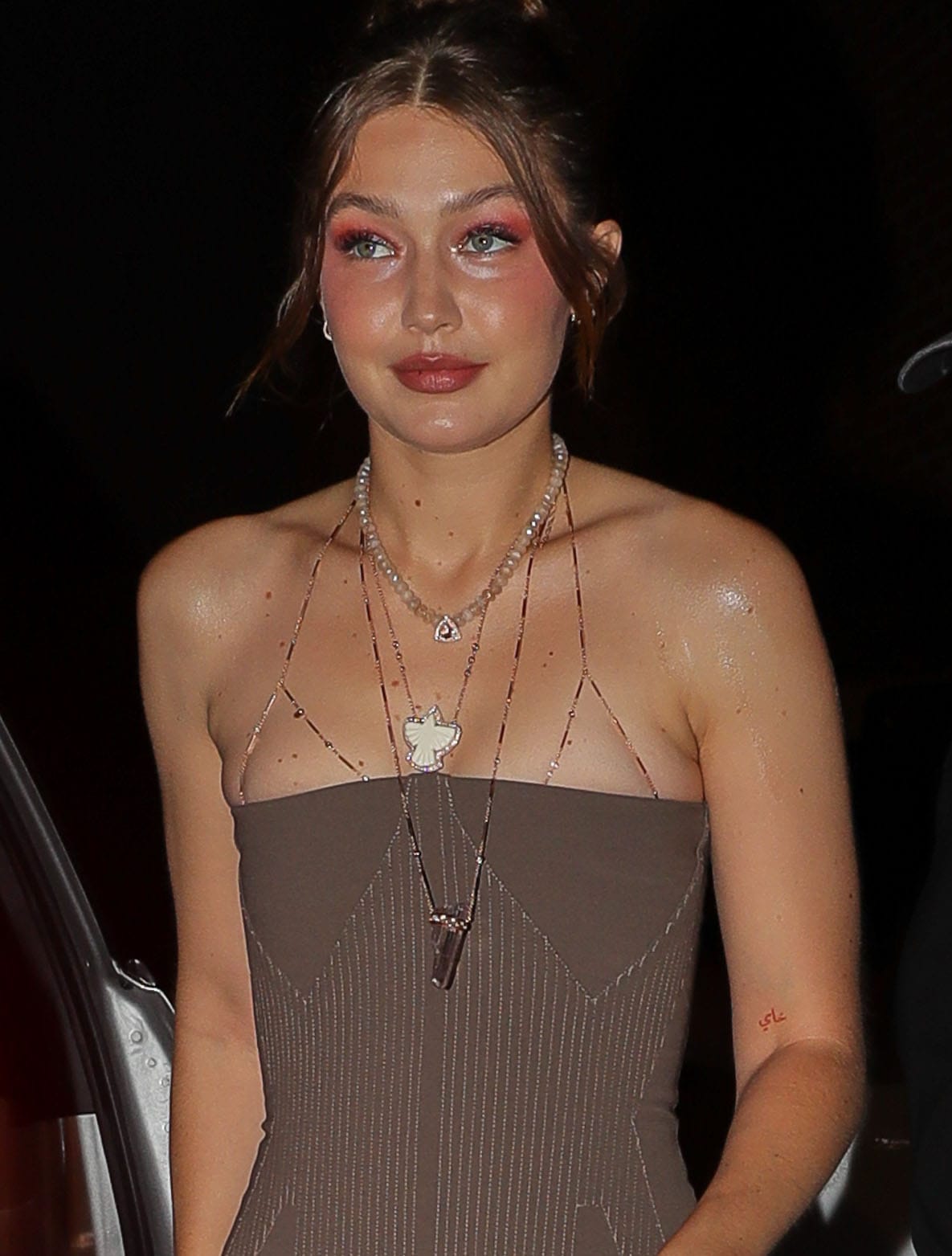 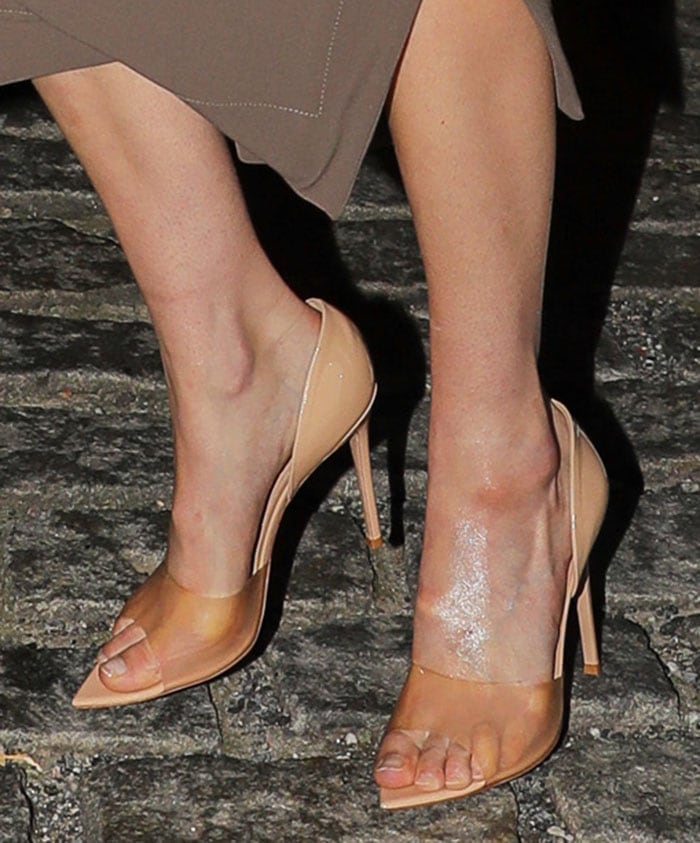 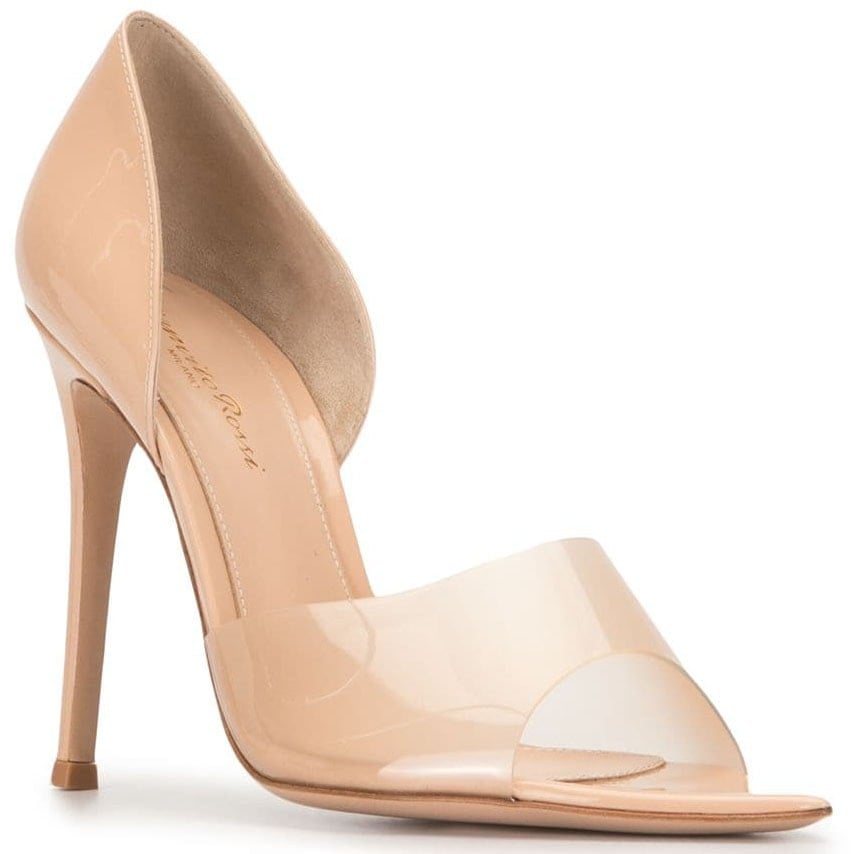