Duterte, cohorts ‘made a killing out of shady transactions’ — Bishop Pabillo 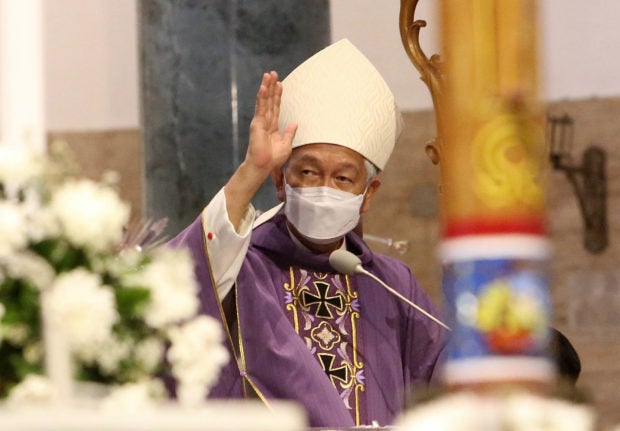 MANILA, Philippines — Bishop Broderick Pabillo on Monday lashed out at President Rodrigo Duterte, his loyal ally Senator Christopher “Bong” Go, and their cohorts saying these officials “made a killing” out of the government’s alleged corrupt transactions over procurement of medical supplies.

“They literally made a killing out of this corrupt transaction. While Filipinos are dying and more are getting sick, Duterte and his cohorts are laughing themselves all the way to possibly staying in power beyond 2022 with huge election money to be able to buy the votes of the poor and suffering Filipinos,” Pabillo expressed in a statement.

“Nothing speaks more eloquently of the symbol of corruption in this present administration than the face mask and face shield that we Filipinos are required to wear. These protective gears were bought from their Chinese connections at grossly overpriced amounts, totaling into billions of pesos,” the religious leader added.

Pabillo, vicar apostolic of Taytay, lamented the “appalling and unforgiving” supposed plunder of public funds which occurred when the country grappled to face the pandemic’s wrath.

“It is a brazen act of corruption committed with impunity and without regard to human life,” he noted.

The administration’s multi-billion-peso deal, hounded by corruption allegations, to a Chinese firm linked to Duterte’s former economic adviser is at the expense of the poor and suffering Filipinos, Pabillo said.

“This face mask transaction has unmasked the hypocrisy of Duterte who has vowed to fight corruption and remove officials even if there is just a ‘whiff of corruption’ in any government agency,” the bishop noted.

Pabillo further urged the public to strip Duterte of any power.

“Unmask him now and remove any protective shield of power that he still presently enjoys. Otherwise the virus of complacency and don’t-care-attitude of the majority of our countrymen will continue to infect our nation, a virus that is more potent and virulent which destroys not just individual lives but more so the very foundation of our beloved Philippines,” he concluded.

Earlier, Pharmally Pharmaceutical Corp. was awarded by the government an P8.6-billion supply contract despite being newly established with low capitalization.

INQUIRER.net has asked the Palace for a comment but has yet to reply as of posting time.

As whiff of corruption emits bad odor, Duterte quick to defend his men