While not nominated for any awards, Charli XCX was asked to present an award at the 2021 MTV Video Music Awards in New York.

The 29-year-old superstar did not leave much to the imagination in a sheer black lace look and black pointy Christian Louboutin pumps.

Made from handmade wilt textile with hand-sewn upcycled lace, her custom dress is from Taiwanese knitwear designer Shawna Wu.

Earlier this year, she paid tribute to British music producer and musician Sophie, who died at the young age of 34 on January 30 in Athens. 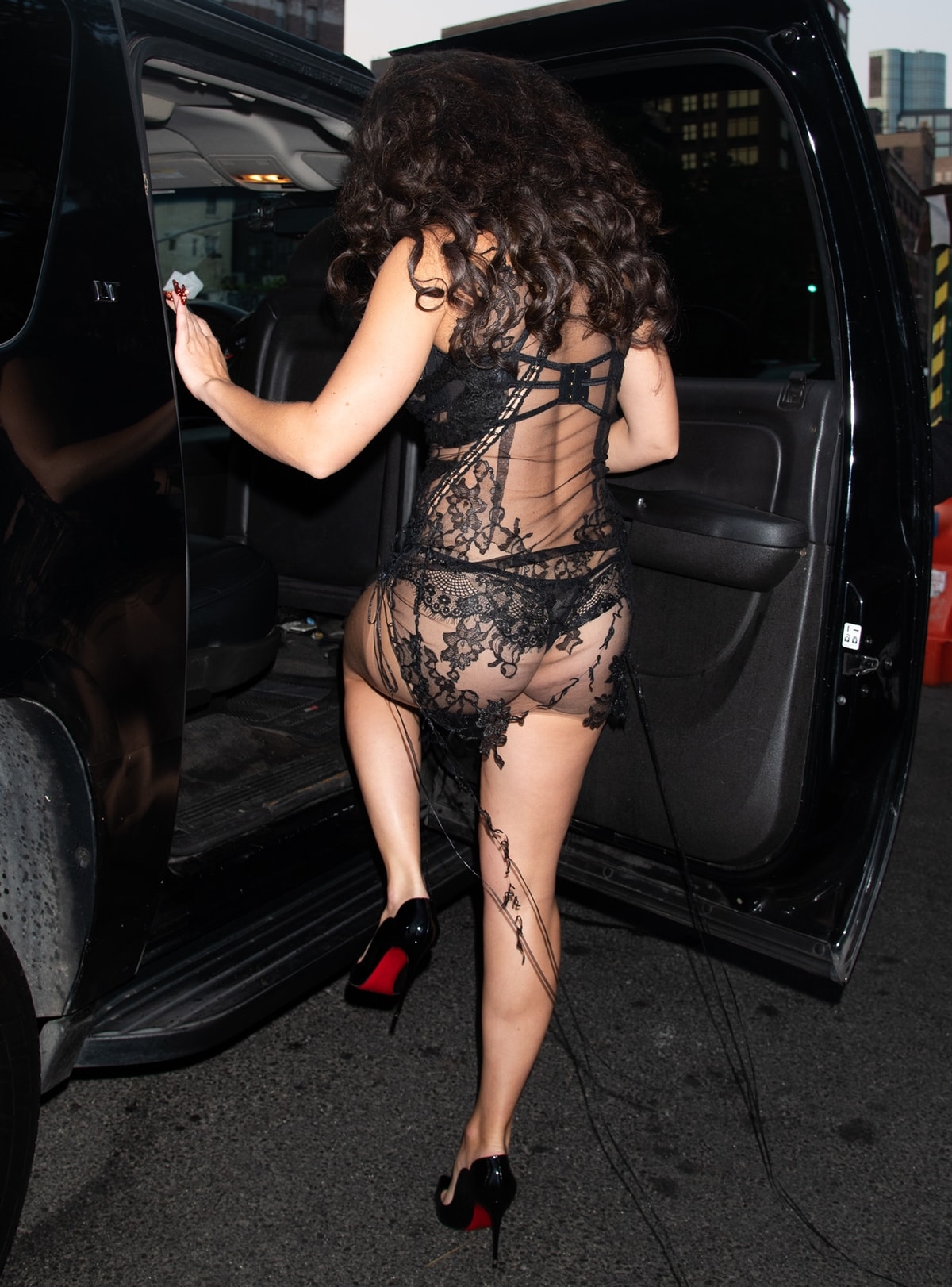 “It’s really hard for me to sum up the special connection I felt with such an amazing person who completely changed my life. There are so many memories, so many small details, so many different views, and incredible feelings and stories,” she wrote about her longtime collaborator and friend. 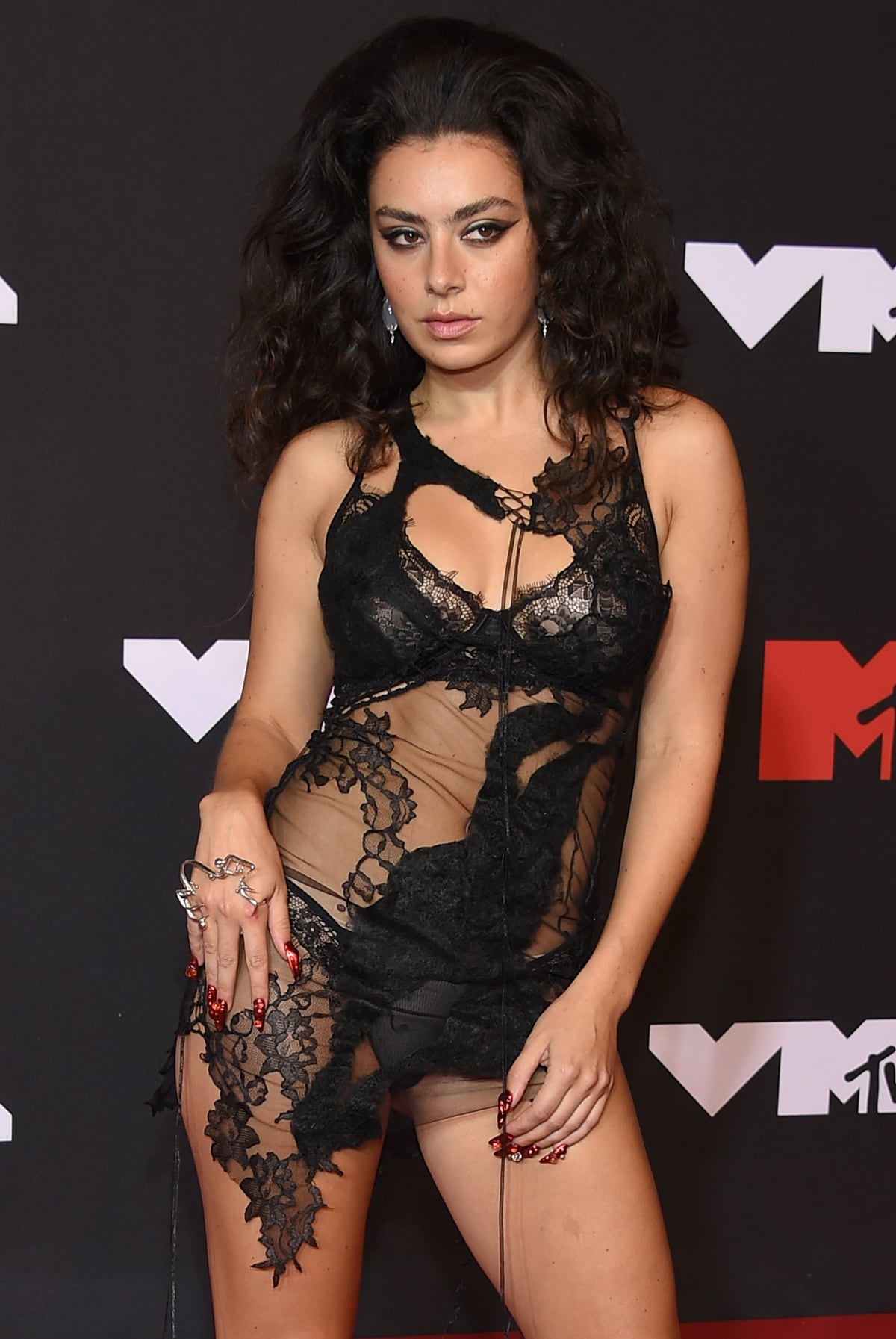 “It’s impossible to summarize the journey I went on with Sophie. Even the most insignificant things felt enormous. I can’t explain how I feel and I can’t encapsulate what a unique person she was in one small social media post,” she continued.

“All I can say is that I will miss her terribly; her smile, her laugh, her dancing in the studio, her gentle inquisitive voice, her cutting personality, her ability to command a room without even trying, her incredible vision and mind. She taught me so much about myself without even realizing. I wish I had told her more how special she was, not just her music but her as a person. I love you and I will never forget you Sophie.” 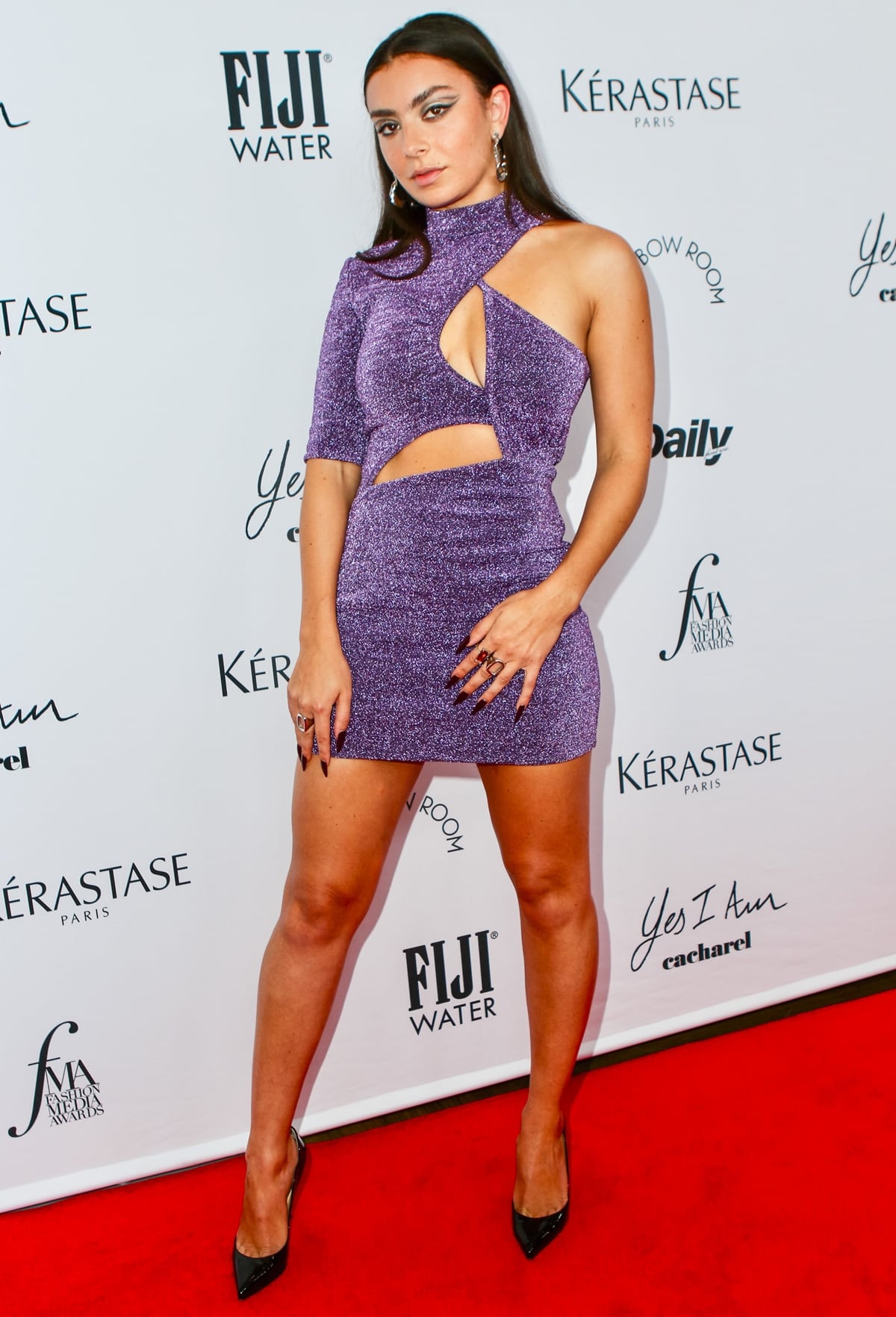 “Oh my gosh, so many people…I don’t know, I could list like ten names. I’m really obsessed with Charli XCX and I think she’s an incredible songwriter, so it’d be really cool to write with her,” Olivia Rodrigo said earlier this year when asked about her dream collaborator. 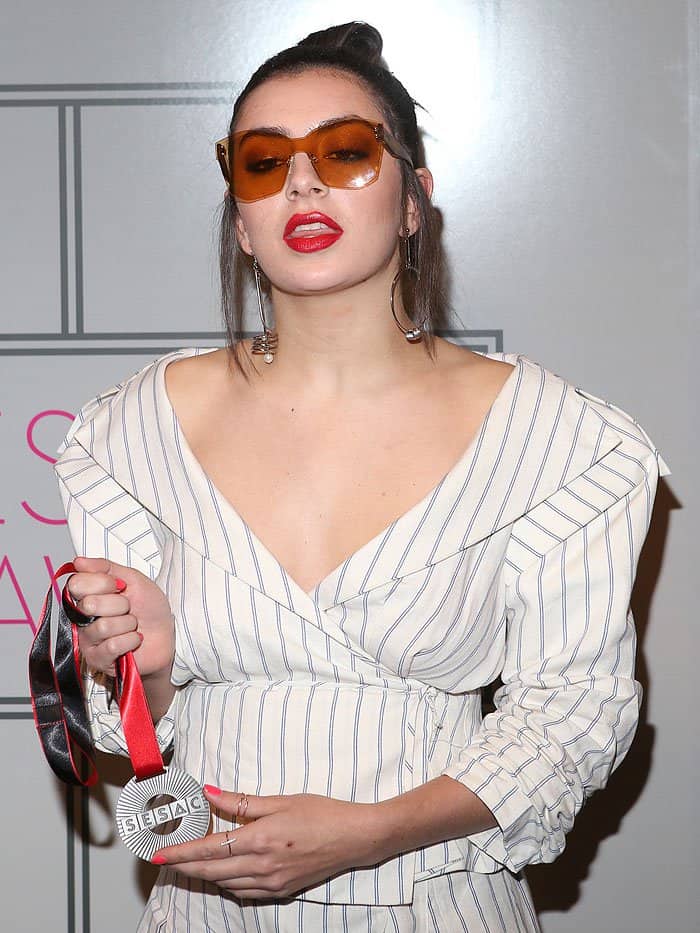 Charli XCX holding her Songwriter of the Year and Song of the Year awards that she won at the 2017 SESAC Pop Awards at Cipriani in New York City on April 13, 2017 (Credit: Derrick Salters / WENN)

In April 2017, congratulations were in order for Charli XCX!

The young singer had just been awarded “Songwriter of the Year” at the 2017 SESAC Pop Awards. She also won “Song of the Year” for “Same Old Love” —yes, that hit single sung by Selena Gomez. 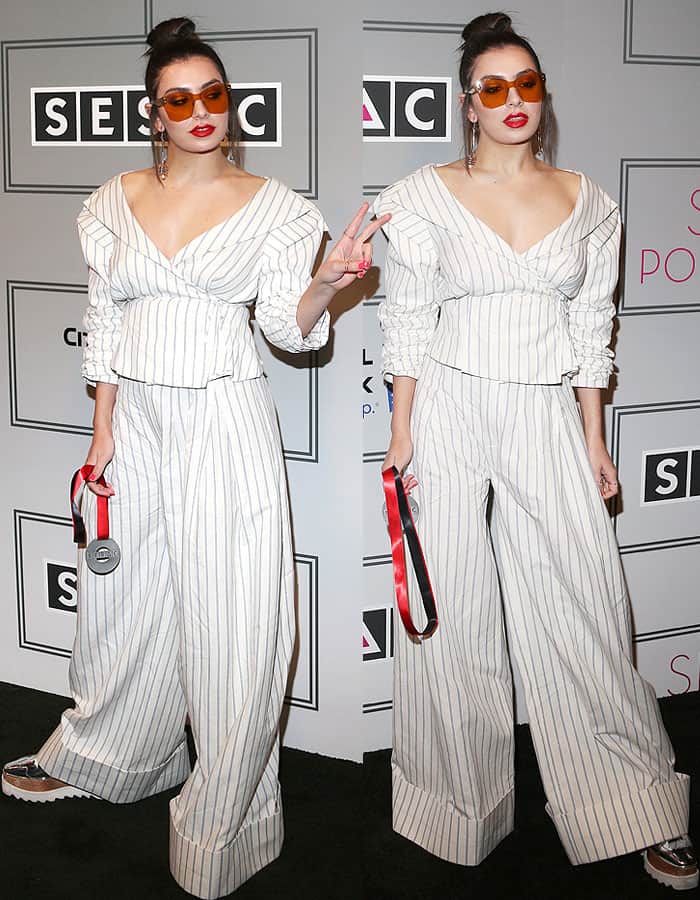 Charli XCX made her commercial breakthrough in early 2014 when she featured on Iggy Azalea’s single “Fancy” (Credit: Derrick Salters / WENN)

We know Charli XCX has a penchant for outrageous red carpet fashion, so her pinstriped pajama set comprised of a portrait-collared wrap top and cuffed wide-leg bottoms was a good fit for her colorful persona. 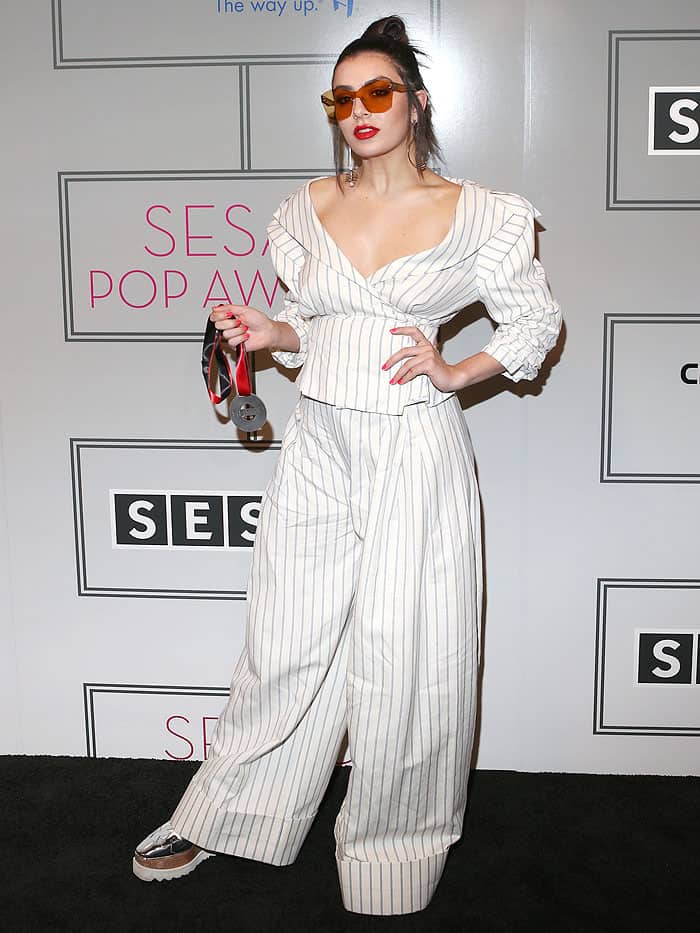 Charli XCX was honored with the Songwriter of the Year and Song of the Year wins at the 2017 SESAC Pop Music Awards (Credit: Derrick Salters / WENN)

Her shoes are decorated with star cut-outs. She completed her look with a pair of burnt orange sunglasses, mismatched dangling earrings, and bright red lips. 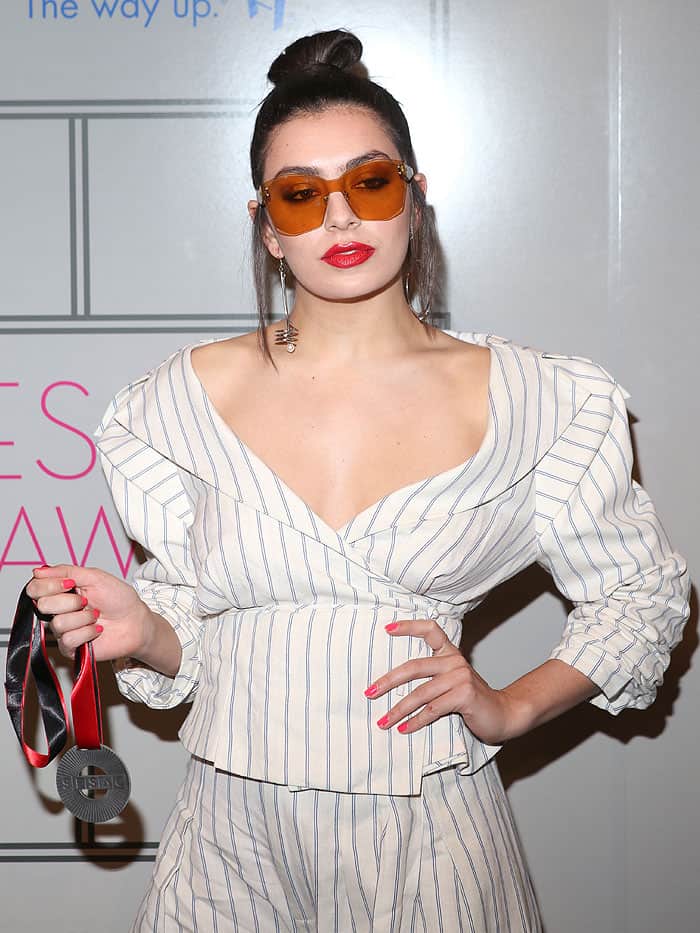 Our only comment on Charli XCX’s ensemble is that it was already sadly too wrinkled by the time she had her picture taken with her awards. 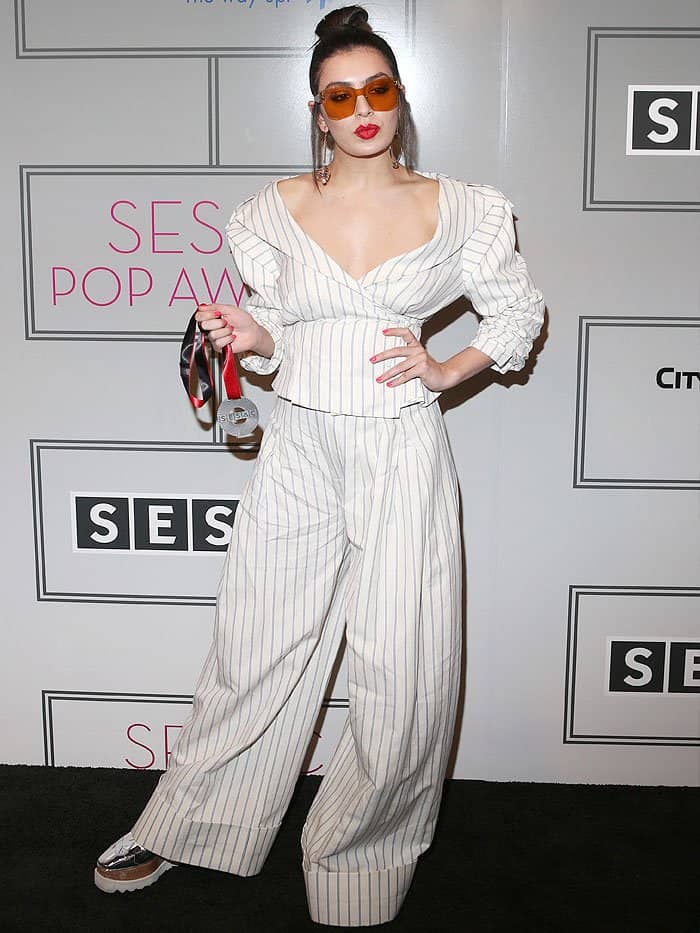 Charli XCX, which was the username she used on MSN messenger throughout her teenage years, stands for Charli Kiss Charli (Credit: Derrick Salters / WENN)

It was in 2014 when we first spotted the Stella McCartney platform creepers on Jessie J, and nearly three years later, they were still going strong.

After numerous reiterations, these shoes have been spotted on celebrities such as Kendall Jenner, Gigi Hadid, Kourtney Kardashian, Lily Collins, and Oscar winner Viola Davis. 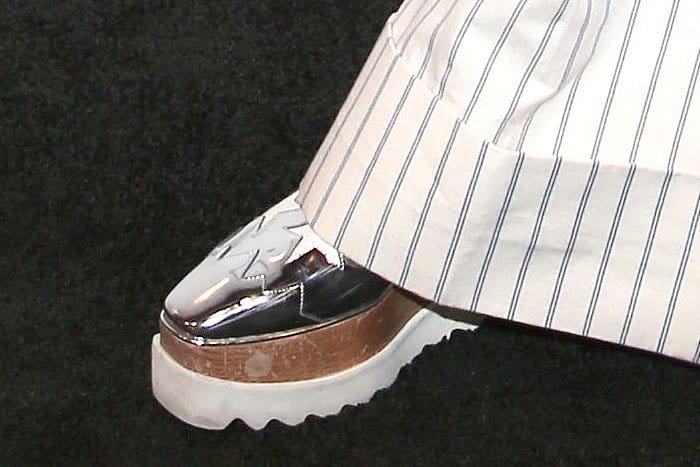 You can shop the exact Stella McCartney “Elyse” platform oxford creepers with star cutouts at Farfetch. 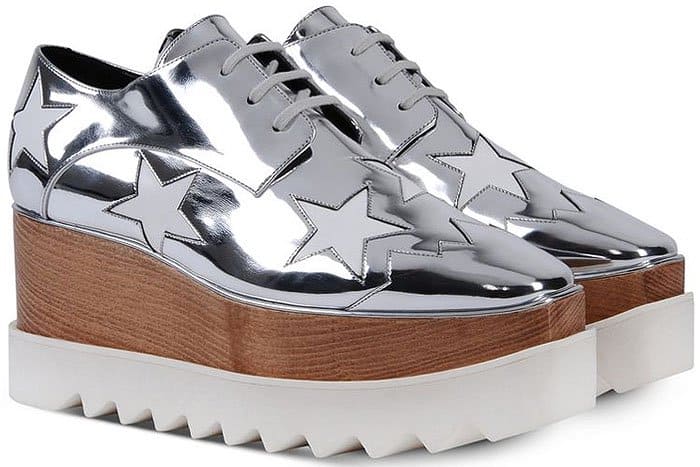 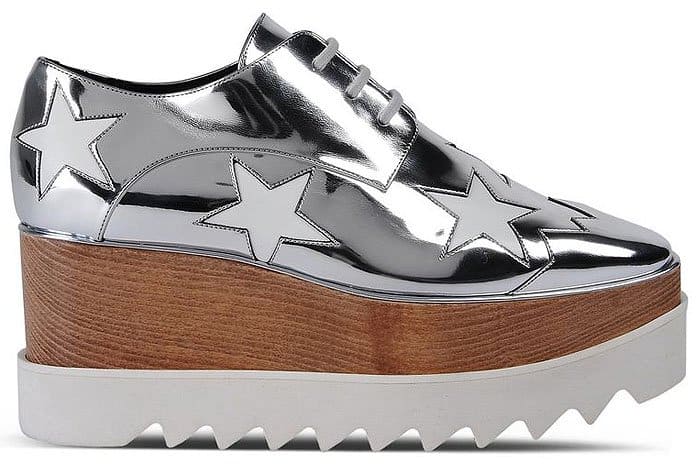 The 5 Best Fall Fashion Trends for Women Over 60