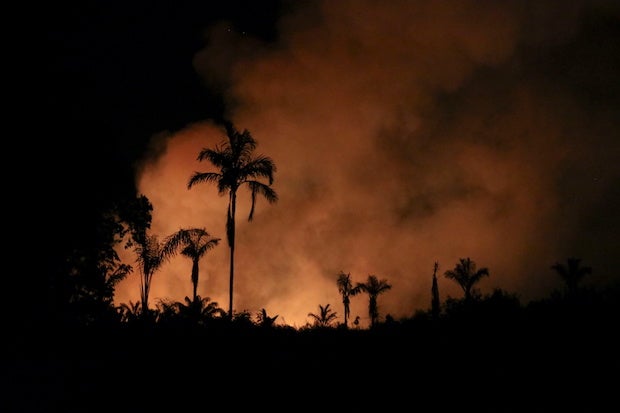 Smoke from a fire rises into the air as trees burn amongst vegetation in Brazil’s Amazon rainforest next to the Transamazonica national highway, in Canutama, Amazonas state, Brazil, Sept. 2, 2021. (REUTERS)

A Reuters witness saw vast burned and clear cut areas on Wednesday and Thursday, as the arc of deforestation advanced deeper into the jungle by the frontier town of Labrea, the municipality with the most fires this year.

Fires ramped up in the Brazilian rainforest in August, according to government data released this week, with fires for the month well above the historic average for the third consecutive year under right-wing President Jair Bolsonaro.

Such levels were last seen a decade ago before Bolsonaro took office. The right-wing president has been widely criticized for driving development in the Amazon while working to weaken environmental protections. Scientists fear the rapid rate of destruction risks sabotaging global attempts to limit climate change.

The former army captain has sought to roll back indigenous land rights – which protect huge swathes of rainforest – and defanged environmental agencies, handing enforcement responsibilities to the military who have failed to prevent the destruction.

Newly cleared areas near Labrea, in southern Amazonas state, were being turned into cow pastures. Informal logging roads branch off the Transamazonian Highway, which ends in Labrea.

Nearby, there are signs that the destruction is also nearing the protected Mapinguari National Park and Caititu indigenous reserve.

Satellites registered 28,060 fires in the Brazilian Amazon in August, a decline of 4% compared to the same month in 2020 when fires likely hit the highest point in a decade, according to Brazil’s national space research agency Inpe.

The Amazon is the world’s largest rainforest and is seen as a vital bulwark against climate change because of the vast amount of carbon dioxide that its plant life absorbs and stores.

The elevated level of blazes comes in spite of Bolsonaro’s broad ban on outdoor fires and military deployment in response to the destruction for the third straight year.

Reuters saw no evidence of government firefighters or environmental enforcement efforts in Labrea.

Brazil’s Environment Ministry did not immediately respond to a request for comment.